The United Nations has reported that a delegation led by the Secretary-General's Deputy Special Representative for the Central African Republic visited Kemo prefecture to gather more information on new allegations of sexual exploitation and abuse, as well as to engage with local communities and authorities.

Delegation members included UN personnel from the conduct and discipline team, the human rights unit, as well as representatives of the UN Population Fund (UNFPA), the Office of the UN High Commissioner for Refugees (UNHCR), and the UN Children's Fund (UNICEF).

“On Friday, the UN Mission in the Central African Republic (MINUSCA) said it received new information of allegations of sexual exploitation and abuse both by UN and non-UN forces and civilians in the Kemo prefecture,” said UN Spokesperson Stéphane Dujarric, at a press briefing in New York today.

“These allegations reportedly refer to incidents that occurred in 2014 and 2015,” he noted. “The Mission said that its primary concern was to ensure that victims have been assisted and all reports immediately investigated to ensure that any perpetrator is appropriately sanctioned.

The integrated team will gather all available information and preserve evidence to the extent possible.”

While more information from the Mission in expected in the next days, the Under-Secretary-General for the Department of Peacekeeping Operations, Hervé Ladsous, will be travelling to the country today to represent the Secretary-General at the inauguration ceremony of the newly elected President, Faustin-Archange Touadera. The ceremony is expected to take place on Wednesday.

“During his visit, Mr. Ladsous will meet with the national authorities and discuss the political process as well as their views on the country's relationship with the peacekeeping mission there,” Mr. Dujarric informed reporters. “He will also meet with the mission's leadership as well as senior UN police and military commanders to address the issues of security, performance and conduct, including sexual exploitation and abuse.” 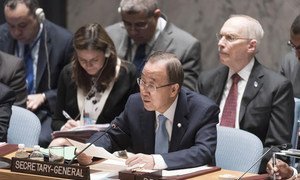