Emphasizing the consistent, dependable and universal commitment of women to conflict prevention, the head of UN Women today called for greater efforts to reach the goal of allocating at least 15 per cent of peacebuilding resources to gender equality and women's empowerment.

“Women need to be resourced so that they can do more,” Phumzile Mlambo-Ngcuka, Executive Director of UN Women told the Security Council during an open debate on the role of women in conflict prevention in Africa.

“The commitment to allocate at least 15 per cent of peacebuilding funds to gender equality and women's empowerment, must become a reality. This must be extended to all efforts aimed at preventing and countering violent extremism,” she added.

She also stressed that women's organizations must receive the political and financial support needed to engage in violence prevention, mediation and diplomacy, as investing in gender equality as part of the 2030 Agenda for Sustainable Development “is the best recipe for structural, long-term prevention.”

However, the role of women in conflict prevention is often missing in highest-level discussions about peace and security, she pointed out, welcoming today's debate that focused on the relationship between the need to focus on prevention of violence and paying attention to the critical importance of gender equality.

Ms. Mlambo-Ngcuka went on to cite specific examples of conflict prevention led by women in Africa, including the 'Women's Situation Rooms,' a monitoring mechanism to support women candidates and fight discrimination of women in electoral processes and gender-based electoral violence and harassment.

In the last five years, the mechanism has been established in Guinea Bissau, Kenya, Liberia, Mali, Senegal, Sierra Leone and Uganda, and the model is being replicated in a growing list of countries across Africa with UN Women's support.

“Our research also shows that women play a key role in de-escalating tensions and preventing radicalization in their families. In Mali, the most important influence for the successful re-integration of many ex-combatants has been the women in their families and communities,” she said.

In the Sahel region, the income, status and resilience of women has been boosted by programmes that address the gender gap in access to land and other productive assets, she said. In poor areas of Kenya, women's organizations are using mothers to identify and prevent the spread of radicalization, and in Burundi, hundreds of women mediators are working tirelessly to address local conflicts.

According to the Global Study on Women, Peace and Security, countries with lower levels of gender inequality are less likely to resort to the use of force; security of women is one of the most reliable indicators of the peacefulness of a State; and women's different spending patterns contribute directly to post-conflict social recovery, she noted.

She also presented some proposals. The UN's prevention work should include more frequent deliberations by the Security Council informed by the perspective and analyses of women on the ground. The practice of hearing from civil society should be extended to consultations on country-specific situations, to the work of the 15-nation body's subsidiary organs, including the Counterterrorism Committee, as well as the Council's visiting missions, she added.

Council members should also demand a robust gender analysis in reports and in all atrocity-prevention efforts, she continued, noting that UN Women serves as the Secretariat for the new Informal Expert Group on Women, Peace and Security, which held its first meeting last month on Mali. This mechanism is an important step in ensuring consistent and quality information flows to the Council, she added. 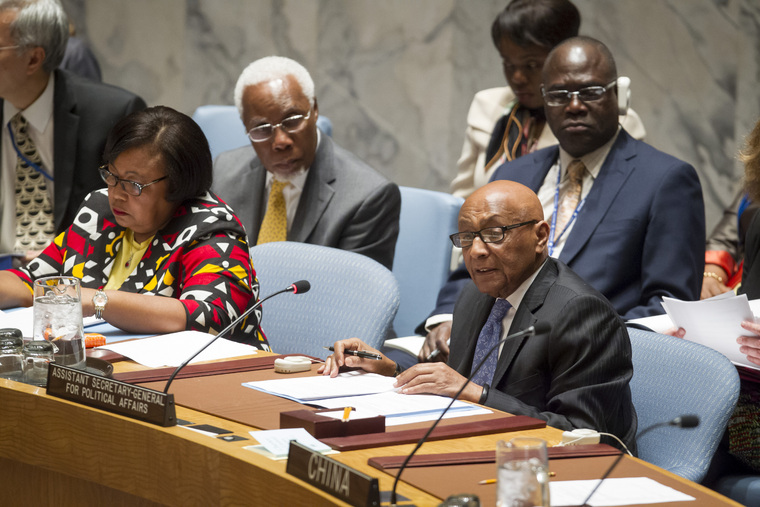 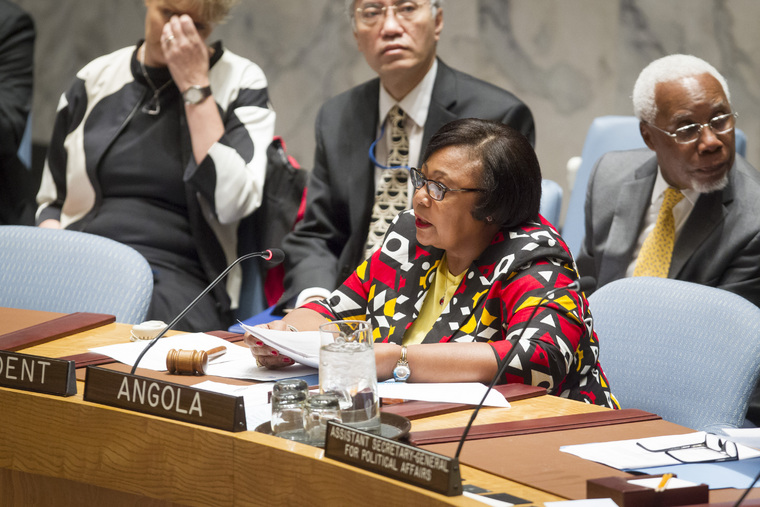 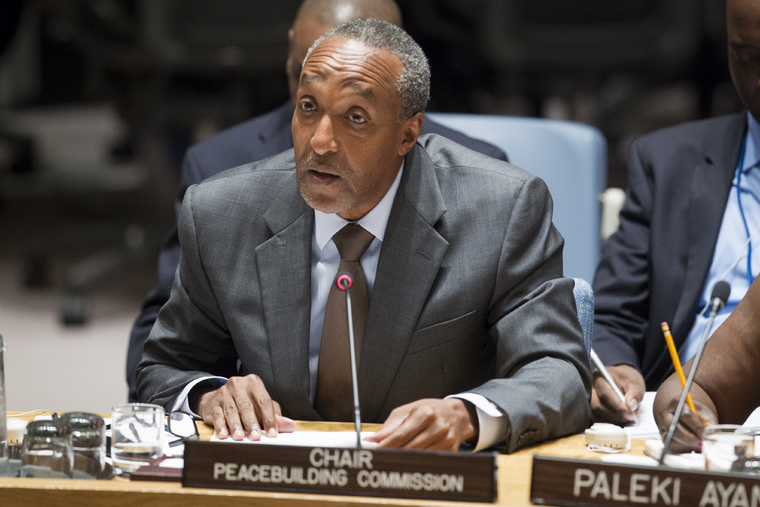 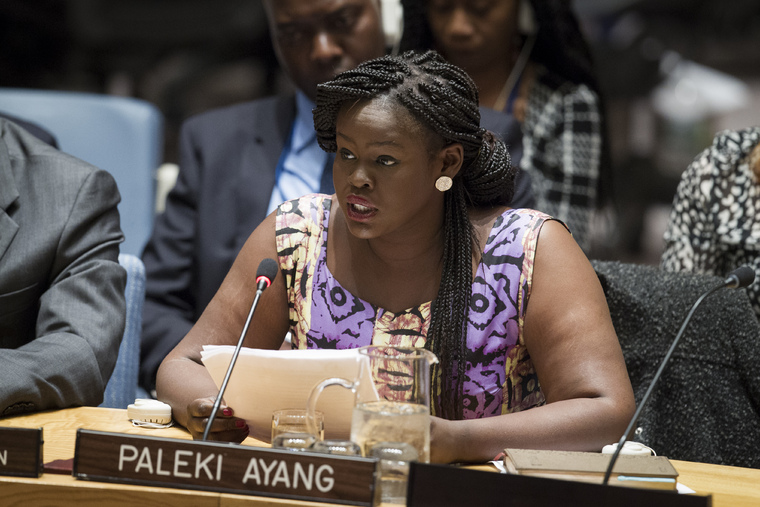 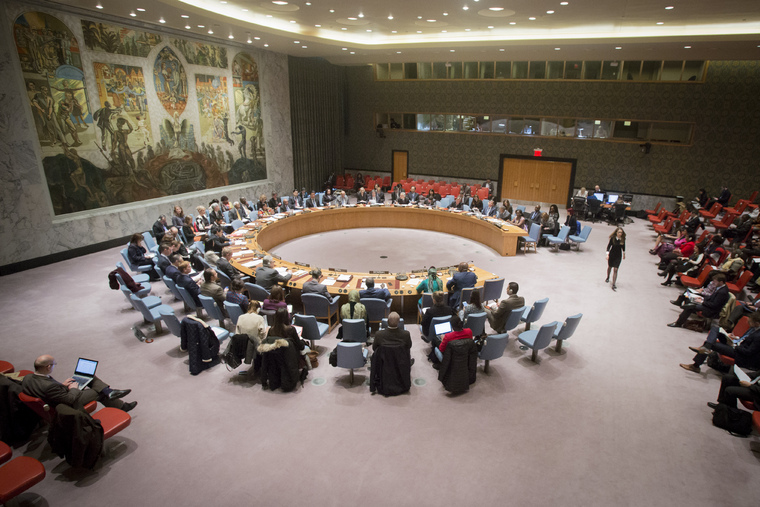 A wide view of the Security Council open debate on “The role of women in conflict prevention and resolution in Africa”. UN Photo/Manuel Elias 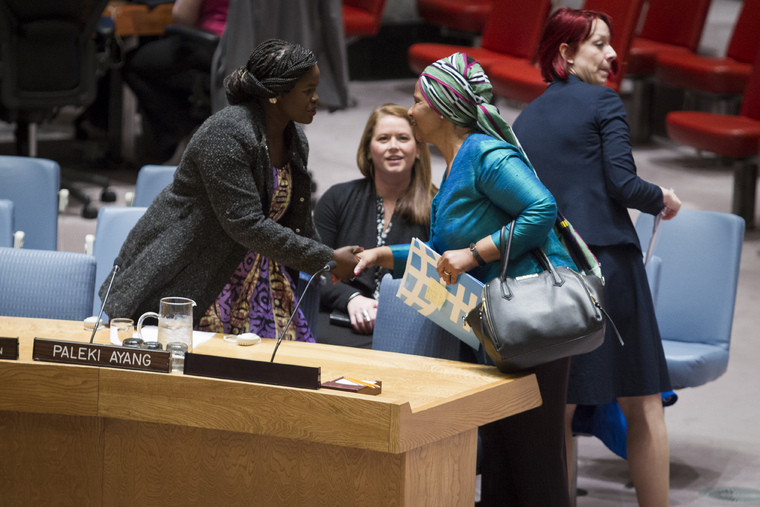 Also briefing the Council was Tayé-Brook Zerihoun, Assistant-Secretary-General for Political Affairs, who said promoting women's effective participation in conflict mediation and addressing their specific needs in peacemaking efforts had been a priority of the Department of Political Affairs since 2010, when its conflict-prevention work had become increasingly inclusive.

Since 2012, all UN mediation support teams had included women, and women made up half of the participants in the Department's high-level mediation skills training, which focused on enhancing gender parity and the future character and configuration of international peacemaking.

He said the Department also continued to implement, with UN Women, its Joint Strategy on Gender and Mediation, which helped to build mediation capacity for envoys and mediation teams by providing gender expertise and training, while UN Women strengthened the capacity of regional, national and local women leaders and peace coalitions, and supported access opportunities for women in peace negotiations.

Macharia Kamau, Chair of the Peacebuilding Commission, said that women remain a resource that has not been effectively utilized, citing such obstacles as cynical cultural practices that maintained patriarchal attitudes; insufficient political will to implement Security Council resolution 1325 (2000) on women, peace and security; militarized approaches to conflict resolution that crowded out organic initiatives; and the absence of gender-sensitive economic recovery.

As such, the Commission had outlined its first gender strategy, which it expected to adopt before July, he said, adding that it set out recommendations on strengthening the integration of gender perspectives in all country-specific and strategic engagements. Going forward, the Commission would use its unique leverage to advocate for technical expertise on gender equality and peacebuilding, as well as funding, he continued.

The combination of commitment on the part of senior leadership, specialized expertise and dedicated financial resources would make a real difference, as had been seen in Burundi, where UN-Women supported a network of 534 women mediators across all municipalities, he said.

Placing a personal emphasis on the gender issue, he said that he had seen the ruin that 100 years of colonial and post-colonial policies had wreaked upon women in the culture and society of his homeland, Kenya. “Women remain firmly at the bottom of the rungs of social progress and empowerment,” he said, underlining that a more inclusive future would require that countries respond forcefully to the condition of women in their midst. 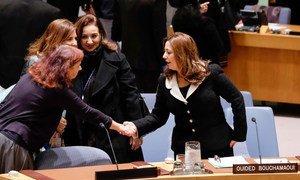 FEATURE: A conversation with female ambassadors about the UN Security Council

While the gender ratio between female and male diplomats at the United Nations is becoming more balanced overall, the number of women ambassadors in the Security Council has fallen from its peak of six women in 2014 to four in 2015 to just one this year. How has this influenced the top collective decision-making body on peace and security, and what, if anything, does this say about the future of UN diplomacy and peacebuilding?