Both the Syrian Government and opposition delegations are taking the United Nations-mediated peace talks “very seriously,” the UN envoy on the discussions said today, wrapping up the second round of the process by issuing a paper on “commonalties that exist between the two negotiating parties,” and announcing that the talks could pick up again by the second week of April.

“The support of this cessation of hostilities [held] for one month. And [as for talks,] no breakdowns; no walkouts; and no de-legitimization or personal de-legitimization,” UN Special Envoy for Syria Staffan de Mistura told reporters in Geneva as he summed-up the past 10 days of intra-Syrian talks.

He said since the Government delegation was extremely focused on the issue of principles in order to be able then to talk about everything else and that the opposition's High Negotiations Committee (HNC) had a very serious list of papers as well, he had decided to produce a paper himself, issued as a paper on points of commonalities, which, while not agreed by the two parties, summarizes the negotiations results of the talks thus far, and covers, among others, the rejection of terrorism, the right of return for refugees, rejection of foreign interference in Syria, and a political transition of power.

“I think by looking at those twelve points you can see that there is a lot of common ground, which can be, according to my interpretation and my colleagues, a listing to both sides, and even to all the stakeholders we have been inviting to be consulted – as you know civil society, various platforms, even those who came from far away and women's associations – that those points are, for me, to look for a common ground,” he explained.

Responding to questions, he said that while the paper does not delve into the details of the political transition – which he has referred to as “the mother of all issues” in the negotiations – the guiding principles do reference the Geneva Communiqué “in its entirety. And if you look more carefully there is reference to [Security Council] resolution 2254 which includes three elements: governance, constitution and elections. So there are guiding points, which are leading towards helping the next phase.”

As for next steps, Mr. de Mistura that as things stand, having come through the past two weeks with “no drama,” and with potentially a paper that on what could be an understanding of principles, “the next time we take the principles aside and we look now at political process. Hopefully […] between now and then, could be the other political and diplomatic discussions, which are mutually supportive.”

So the target date would start on 9 or 10 April, but with arrivals, could slip to 13 or 14 April, “because we do not want too much of a gap,” said Mr. de Mistura, adding that he would keep everyone informed of any changes.

In the meantime, he said, the issue of detainees has become one of his key priorities, as well as maintaining pressure regarding the lifting of sieges, “and obviously maintaining the issue of supporting the cessation of hostilities and expanding it and controlling it […].” 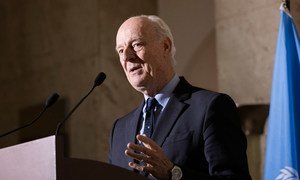 The UN mediator for the intra-Syrian talks said today that political transition is the “mother of all issues” in the ongoing peace negotiations involving the Government and the opposition.