“Fugitives cannot outrun the international community's collective resolve to make sure that they face justice according to the law,” Mr. Ban said through his spokesperson.

“His judgment is symbolically powerful – above all for the victims of the crimes committed during the wars in Bosnia-Herzegovina and across the former Yugoslavia, but also for victims across the world,” said Zeid Ra'ad Al Hussein in a statement from his Office (OHCHR).

Mr. Zeid added that while the verdict might be appealed, it shows “no matter how powerful they are, no matter how untouchable they imagine themselves to be, no matter what continent they inhabit, the perpetrators of such crimes must know that they will not escape justice.”

Mr. Karadžić, who had been the President of the self-styled Bosnian Serb Republic, was convicted of genocide in the area of Srebrenica in 1995, of persecution, extermination, murder, deportation, inhumane acts (forcible transfer), terror, unlawful attacks on civilians and hostage-taking. 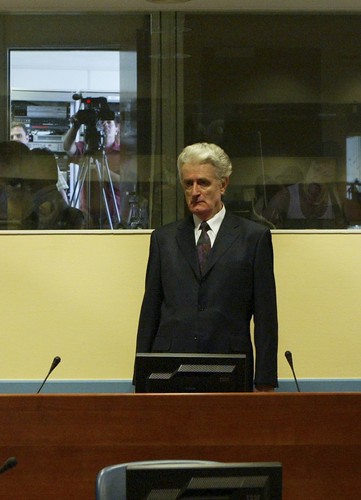 The ICTY acquitted him of the charge of genocide in other municipalities in Bosnia and Herzegovina in 1992.

Mr. Zeid has a personal connection to the trial, having served in the UN Protection Force in the Former Yugoslavia between1994 and 1996.

In his statement, Mr. Zeid said the verdict stripped away the pretence that Mr. Karadžićs actions were anything more than political manipulation, and exposes him as “the architect of destruction and murder on a massive scale.”

“It is time now to ensure that his poisonous legacy does not continue to burden the people of the former Yugoslavia with deeply-felt grievances, secrecy and lies,” he stressed.

He added that the trial should give pause to leader in Europe and elsewhere who seek to exploit nationalist sentiments and scapegoat minorities for broader social ills.

“Speech that incites hatred, discrimination and violence is an inflammable force,” he said. “In the countries of the former Yugoslavia, we saw the terrible bloodshed that can result.”

Following the announcement of the verdict, ICTY Prosecutor Serge Brammertz said: For two decades now, the victims have put their trust in us to deliver [justice]. Thousands came here to tell their stories and courageously confront their tormentors. Today, with this conviction, that trust has been honoured. Justice has been done.”

He went on to stress that the truth established by this judgment will stand against continuing attempts at denying the suffering of thousands and the crimes committed in the former Yugoslavia.

“Moments like this should also remind us that in innumerable conflicts around the world today, millions of victims are now waiting for their own justice. This judgment shows that it is possible to deliver it,” he said.

Also today, Special Representative of the Secretary-General on Sexual Violence in Conflict, Under-Secretary General Zainab Hawa Bangura, spoke in favour of the conviction. Having met with Bosnian women during a visit to Bosnia and Herzegovina, the Under-Secretary-General noted their concerns as the perpetrators still walk amongst them.

“We must support these survivors in ensuring that all perpetrators are held to account,” she said, stressing the importance of international courts in helping to convert longstanding cultures of impunity for sexual violence into cultures of deterrence.

The Special Adviser on the Prevention of Genocide, Adama Dieng, also stressed that today’s verdict is not only about justice for the past but is also about the future.

“Accountability constitutes a critical component of prevention and also an important step along the path to national post-crisis reconciliation,” Mr. Dieng said. He added that “this verdict will assist the entire region to think about what happened, learn the lessons of the past and chart a future that fully acknowledges the past.”

♦ Receive daily updates directly in your inbox - Subscribe here to a topic.
♦ Download the UN News app for your iOS or Android devices.
BOSNIA AND HERZEGOVINA