The UN mediator for the intra-Syrian talks said today that political transition is the “mother of all issues” in the ongoing peace negotiations involving the Government and the opposition.

Briefing reporters in Geneva, UN Special Envoy Staffan de Mistura said that today's discussion focused on some issues, but stressed that “an exchange” between the Government and opposition will not solve the problem, and what is needed is some common ground for the guiding principles for negotiations.

“I have been reminding everyone that there is no plan 'B;' so plan 'B, is basically getting through this,” he underscored.

The issue of terrorism remains a sticking point. The Government has its own elaborate analysis and its own concept of terrorism, he said. As far as the UN is concerned, those organizations which are listed by the Security Council as terrorists are terrorists.

Drawing attention to United States Secretary of State John Kerry's visit to Moscow to meet with his counterpart, Foreign Minster Sergey Lavrov, which is taking place in coincidence with the ending of this session of the Geneva Intra-Syrian Talks, the UN mediator said “nothing in this situation is purely coincidental, everything is interconnected.”

Mr. De Mistura also said that he met with 25 representatives from civil society. “I know you may be less interested in civil society because they are less politicized… but they give us the voice of the Syrian people,” he said.

Asked if things are not moving quickly enough in this process compared to the developments on the ground, he said “that's why we are in a hurry,” highlighting the importance of progress on political transition while the cessation of hostilities is still holding.

To a question about Russia's warning that it would start responding unilaterally to the ceasefire violations in Syria if the US does not coordinate the rules of engagement against violators, the UN mediator said that he was concerned but supportive of the fact that both Russia and the US are talking to get the political process moving.

The “innovative” operations centre, in order to allow Russians and Americans to cooperate in containing the crisis, is something UN had not done before, he said. 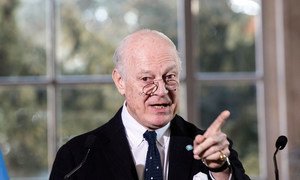 As the first week of the new round of intra-Syrian talks ended today, the United Nations Special Envoy for Syria said the “proximity system” of the discussions, whereby parties are meeting indirectly through his mediation, has contributed to the talks moving forward.