The Earth is already one degree Celsius hotter than at the start of the 20th century, halfway to the critical two-degree threshold, and national climate change plans adopted so far may not be enough to avoid a three-degree temperature rise, the UN weather agency warned today upon the release of its 2015 annual report on the status of the climate.

“Many people now think that the problem is solved since we reached a nice agreement in Paris last year… but the negative side is that we haven't changed our behaviors,” Petteri Taalas, Secretary-General of the World Meteorological Organization (WMO), told reporters in Geneva.

He argued that carbon dioxide concentrations in the air would be five times the current level in 500 years if no limits are placed on fossil fuel, meaning that the planet would be seven to eight degrees Celsius warmer at that time. It would then take up to 100,000 years to restore the normal level, he added, stressing the urgency of substantially cutting greenhouse gas emissions in the coming few decades.

According to the WMO Statement on the Status of the Climate in 2015, the year made history, with shattered temperature records, intense heatwaves, exceptional rainfall, devastating drought and unusual tropical cyclone activity.

“Our planet is sending a powerful message to world leaders to sign and implement the Paris Agreement on climate change and cut greenhouse gases now before we pass the point of no return,” Mr. Taalas said in a press release, emphasizing that the worst-case scenarios can be averted by taking urgent and far-reaching measures to cut carbon dioxide emissions.

The statement shows that the global average surface temperature in 2015 broke all previous records by a wide margin, at about 0.76 degree Celsius above the 1961-1990 average, because of a powerful El Niño and human-caused global warming. With 93 per cent of excess heat stored in the oceans, ocean heat content down to 2,000 meters also hit a new record.

The record-breaking trend has continued in 2016. January and February 2016 set yet more new monthly temperature records, with the heat especially pronounced in the high northern latitudes. Arctic sea ice extent was at a satellite-record low for both months, according to NASA and the United States National Oceanic and Atmospheric Administration. Greenhouse gas concentrations crossed the symbolic and significant 400 parts per million threshold.

“The startlingly high temperatures so far in 2016 have sent shockwaves around the climate science community,” said David Carlson, Director of the World Climate Research Programme, which is co-sponsored by WMO. He added that it is premature to determine that 2016 would extend a record-breaking streak.

The WMO Statement was released ahead of World Meteorological Day, on 23 March. 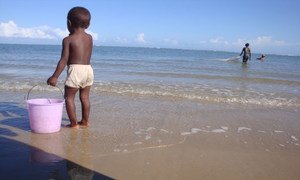