‘No alternative to political settlement of the Burundian crisis,’ Ban tells Security Council

<a href=http://bit.ly/1l9io7S>Phil Moore/IRIN</a>
Relatives of a student killed in the Jabe neighbourhood of Bujumbura, mourn at home in the Burundian capital.
18 March 2016

Secretary-General Ban Ki-moon, who visited Burundi last month as part of an international effort to end the crisis, urged the country’s leaders “to summon the necessary courage and confidence” to launch a credible political process.

“There is no alternative to a political settlement of the Burundian crisis,” he toldthe Council, whose members had also visited the country in January of this year.

Underscoring the importance of regional and international support for the peace efforts, Mr. Ban said that the East African Community (EAC), the African Union (AU) and the UN must work together to provide the “dedicated and professional mediation support” needed.

Mr. Ban noted appointment of former President of Tanzania Benjamin Mkapa as EAC Facilitator, which he called an “encouraging development.” His own Special Advisor, Jamal Benomar, has been representing the UN in discussions, and has deployed a team to Burundi.

During his visit, Mr. Ban said that he underlined his deep concern over the volatile situation in the country. “I expressed my profound worry that the potential spiralling of violence risks relapse into civil war. I urged the Government to take measures to address the continued violence and the impunity that fuels it,” he added.

While there, the UN chief had discussed with President Pierre Nkuruziza the release up to 2,000 detainees, and that the President had previously announced the annulment of arrest warrants against 15 opposition figures and to re-open two media outlets.

“We now look forward to the full implementation of these measures and expect further steps in the same direction,” Mr. Ban said, including the release of all political prisoners and an end to restrictions on civil society and media organizations.

While in Burundi, Mr. Ban said he had also urged the Government to address the continued violence and impunity that fuels the volatile situation in the country.

The top UN official said despite assurances from the Government that the security situation is stabilizing, civil society and opposition parties told him “deeply disturbing” continuing allegations of violence, including those targeting women and children.

‘Many of Burundi’s people live in terror’

Also addressing the Council, High Commissioner Zeid drew international attention to the hundreds of people killed, thousands detained, and over a quarter of a million of Burundians who had fled the country.

“Continued human rights violations, and impunity for perpetrators, mean that many of Burundi’s people live in terror,” he told the Council. “The country remains on the brink of a sudden escalation of violence to even more massive proportions.”

He drew attention to the increasing number of arbitrary arrests and detention since January. On a recent visit of staff from the Office of the High Commissioner (OHCHR) to some detention centres in Bujumbura, “it appeared that almost half the detainees had been tortured or ill-treated, some seriously,” Mr. Zeid said.

The top human rights figure also called attention to the lack of progress in investigating multiple serious human rights violations reported over the past year.

“I urge further and much more credible investigations into the multiple alleged mass graves in the country, as well as into the torture, sexual violence and killings that were reported in December and many other serious allegations,” Mr. Zeid said.

He took note of a recently released report into alleged extrajudicial killings during the events of 11 December 2015.

In order to look into the human rights situation in the country, the secretariat of the independent expert team is due to arrive in April for a four-month deployment. The Government has yet to approve the visit, Mr. Zeid said, calling for the visit to be finalized.

The UN expert team is comprised of three independent experts, per a Human Rights Council resolution from December 2015, mandated with undertaking “an investigation into violations and abuses of human rights with a view to preventing further deterioration of the human right situation.”

Burundi was thrown into crisis this past April when President Nkurunziza decided to run for a controversial third term that he went on to win in July. 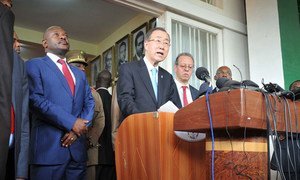 United Nations Secretary-General Ban Ki-moon has welcomed the decision today by the President of Burundi to withdraw some media bans, cancel arrest warrants and release detainees as goodwill gestures to try to end months of violence in the crisis-torn country.