UN Special Rapporteur Michel Forst’s appeal came after the killing of yet another outspoken leader of the Civic Council of Popular and Indigenous Organizations Honduras (COPINH), Nelson García, reportedly occurred on 15 March.

García was allegedly killed shortly after he had witnessed a forced eviction carried out by security forces in the Río Lindo area, South of San Pedro Sula. “This new tragedy points once again to major faults in the protection of rights defenders in the country,” Mr. Forst said in a press release.

“I urge the Honduran Government to publicly condemn the assassination of Nelson García and ensure an immediate, independent and impartial investigation into his death,” he said. “This cycle of violence will only stop when impunity is addressed and perpetrators of such attacks are put to justice.”

According to numerous reports received by the special rapporteur, Honduras has become one of the most dangerous countries in the world for human rights defenders, particularly those promoting rights related to environment and land issues.

On 5 March, after the death of Berta Cáceres, the Inter-American Commission on Human Rights decided to call for precautionary measures for all members of COPINH as they were suffering an escalation of threats and harassment. “However, this has regrettably not prevented Mr. García’s murder,” Mr. Forst concluded. 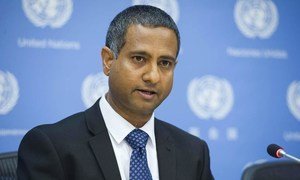 An independent United Nations human rights expert today raised continuing serious concerns about the extremely high rate of executions, especially for juvenile offenders, and fundamental flaws in the administration of justice in Iran.