Fifteen years after a landmark document to combat racism, racial discrimination and xenophobia was adopted in Durban, South Africa, United Nations Secretary-General Ban Ki-moon today said he is concerned that the political will that existed then is under threat.

“The collective determination that enabled such a far-reaching agreement is being undermined by political expediency,” Mr. Ban warned, speaking at a General Assembly meeting to mark the International Day for the Elimination of Racial Discrimination.

The date of this annual observance, 21 March, is the anniversary of the Sharpeville massacre of peaceful demonstrators in South Africa in 1960. “I draw encouragement by how far we have come since that tragedy. But we have much distance still to travel in our work for equality for all,” said the UN chief.

For this year’s observance, the global community is commemorating the 15th anniversary of the Durban Declaration and Programme of Action. Adopted by consensus at the World Conference against Racism, Racial Discrimination, Xenophobia and Related Intolerance, these texts remain the most comprehensive framework for international, regional and national actions against racism.

“The international community acknowledged in Durban that no country could claim to be free of racism. This remains the case today,” stressed Mr. Ban, noting that the world has “undoubtedly come a long way” in ensuring equal rights and non-discrimination.

He recalled that Member States have adopted or amended legislation to guard against racial discrimination. An International Decade for People of African Descent was proclaimed by the General Assembly and will continue through the year 2024. Civil society organizations worldwide working on racism are increasingly active and vocal.

“Yet the persistence of racism indicates that we have not yet done enough,” he underline. “I am deeply alarmed by a surge of intolerance, racist views and hate-driven violence around the world. Racial profiling and violence against certain communities is on the rise. Economic hardship and political opportunism are triggering increased hostility towards minorities. This is being manifested most directly in anti-refugee, anti-migrant and, in particular, anti-Muslim bigotry, attacks and violence.”

The Secretary-General said extreme right-wing political parties “are fomenting divisiveness and dangerous myths.” According to him, “even once-centrist parties have hardened their views; once-moderate countries are seeing xenophobia rise sharply; and once-sober voices have exploited fears in a dangerous echo of the darkest chapters of the last century.”

“In these tumultuous times, we must stand up for rights and dignity for all, and for diversity and pluralism,” he insisted. “We must speak out against anti-Semitism, anti-Muslim bigotry and other forms of hate. An assault on one minority community is an attack on all.”

The UN chief concluded his remarks by reminding Member States that by implementing the Durban agreements “we can uplift not only those who suffer most profoundly but humanity as a whole.”

Echoing this message was the UN High Commissioner for Human Rights, Zeid Ra'ad Al Hussein, who said it is urgent that States honour the commitments made at Durban, and their obligations under international human rights law.

He warned that one of the most alarming challenges is the resurgence of racial discrimination and xenophobia in Europe and elsewhere, warning that migrants are “becoming scapegoats for deeper problems.”

“Now more than ever, States must focus their attention on fulfilling their obligation to protect the most vulnerable sectors in society,” he told delegates in the General Assembly Hall.

“We must be vigilant, to ensure that the stress of factors such as rising unemployment is not displaced into racist harassment, abuse, discrimination and attacks. We must not condone the manipulation of such sentiments for political gain, or their manifestation in official policies,” he said. 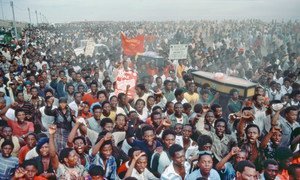 Marking the International Day for the Elimination of Racial Discrimination, the United Nations today urged Member States to boost efforts towards ending discrimination around the world and ratify a critical international convention aimed at abolishing racism in all its forms.