The Office of the United Nations High Commissioner for Human Rights (OHCHR) today said it is deeply troubled by the arrest on Monday in Bahrain of the social media activist and human rights defender, Zainab Al Khawaja, who was detained along with her one-and-a-half year old son.

“Ms. Al Khawaja was previously convicted on a number of charges, including insulting the King. Her father, who co-founded the Bahrain Centre for Human Rights, has been in jail since 2011, serving a life sentence. There are also unconfirmed reports that Ms. Al Khawaja’s infant son has been denied a birth certificate,” OHCHR spokesperson Rupert Colville told reporters at a press briefing in Geneva.

In 2014, amendments to the citizenship law enabled the Government to revoke the citizenship of any Bahraini who “causes harm to the interests of the Kingdom,” fails in his or her duty of “loyalty,” or assists “a hostile state.” At least 250 people have reportedly been stripped of their citizenship as a result, including 72 people in January alone this year.

Those who lose their citizenship are forced to return their passports and ID cards and apply for residency permits or alternatively leave the country. Four such people have been deported since the beginning of February.

OHCHR recalled that under international law, loss or deprivation of nationality that does not serve a legitimate aim, or is not proportionate, is arbitrary and therefore prohibited. It also highlighted that Article 15 of the Universal Declaration of Human Rights explicitly says: “Everyone has the right to a nationality” and “No one shall be arbitrarily deprived of his nationality…”

Meanwhile, the UN right office reported that in addition to being rendered stateless, human rights activists are also facing problems travelling abroad. The prominent religious and human rights figure Maytham Salman, who works in Bahrain and abroad to prevent the incitement of hatred and violence, has reportedly been waiting for his passport to be renewed for more than two months. And another co-founder of the Bahrain Centre for Human Rights, Nabil Rajab, still faces a travel ban, after being convicted – and then pardoned – for tweets he wrote in 2014. He faces further charges for more tweets he allegedly posted in March 2015.

“We are also concerned about recent laws that seriously curtail the right to freedom of expression in Bahrain. A 2014 law amending the penal code provides for up to seven years in jail, and a fine, for offending the King, the flag or national emblem,” said Mr. Colville.

“It is also a crime to offend the National Assembly, the army, courts or government agencies or to develop hostility towards the system of government. These provisions are regularly used to censor and intimidate human rights activists and journalists documenting or raising awareness about abuses.”

He added that the UN Human Rights Committee, which monitors implementation of the International Covenant on Civil and Political Rights, which has been ratified by Bahrain, has made it clear that the mere fact that remarks might be considered insulting to a public figure in Bahrain is not sufficient to justify penalties.

“In addition to restrictions on freedom of expression there is also a serious issue regarding the right to freedom of assembly in Bahrain. Gatherings in the capital have been indefinitely banned since 2013, and dozens of people – including minors – who have participated in protests have been prosecuted,” the Spokesperson concluded. 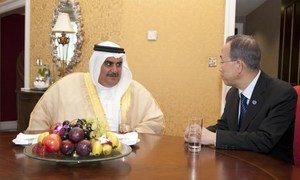 In phone call, Ban discusses challenges to regional peace and security with Foreign Minister of Bahrain

United Nations Secretary-General Ban Ki-moon today held a phone conversation with Sheikh Khalid bin Ahmed Al Khalifa, Foreign Minister of the Kingdom of Bahrain, to discuss the situation in the Persian Gulf region, including challenges to regional peace and security.