OCHA/Philippe Kropf
The city of Sa’ada in Yemen has been heavily hit by airstrikes.
18 March 2016

The United Nations human rights chief today condemned the repeated failure of the Coalition to effectively prevent civilian casualties in airstrikes and to publish transparent, independent investigations into those that have already occurred in Yemen.

“Looking at the figures, it would seem that the Coalition is responsible for twice as many civilian casualties as all other forces put together, virtually all as a result of airstrikes,” UN High Commissioner for Human Rights Zeid Ra'ad Al Hussein said.

He decried that air strikes have hit “markets, hospitals, clinics, schools, factories, wedding parties – and hundreds of private residences in villages, towns and cities including the capital Sana'a.”

These incidents occur “with unacceptable regularity” despite international demarches, and despite public promises, there have not been any investigations, Mr. Zeid said.

His comments came in the wake of a deadly airstrikes on Tuesday that killed at least 106 civilians, including 24 children, in the Al Khamees market in north-western Yemen.

According to the UN Human Rights Office in Yemen, which visited the site the following day, the airstrikes completely destroyed 16 shops at the market, which is the primary shopping area for 15 surrounding villages.

The UN staff said there was “no evidence of any armed confrontation or significant military objects in the area at the time of the attack,” with the closest check-point some 250 meters away from the market.

The incident is “one of the deadliest” since the start of the conflict one year ago, the High Commissioner said. It was apparently timed during afternoon rush hour, when the market was primarily crowded.

Included in those figures are the casualties from the deadly attack on 27 February, when at least 39 civilians, including nine children, were killed and dozens others injured in an airstrike on the Khaleq market in north-eastern district of Sana'a.

“It would appear to be the case that the distinction between legitimate military targets and civilian ones – which are protected under international law – is at best woefully inadequate,” said Mr. Zeid.

He added that “the Houthis and their allies have also been responsible for indiscriminate ground attacks resulting in civilian casualties, which I also condemn and which could qualify, likewise, as international crimes.”

Mr. Zeid reiterated his calls for the two sides of the conflict “to swallow their pride” and agree to a peace deal. 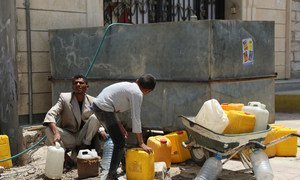