“All together, the aim is to reach an impressive 1.1 million people before the end of April, including in those remaining [besieged] areas, which are the six without any permission,” Jan Egeland, the Special Advisor to UN Special Envoy for Syria, Staffan de Mistura, told reporters in Geneva after a meeting on the humanitarian track of the ongoing intra-Syrian talks.

“It is in violation of international law to prevent us from going. In terms of the medical services, equally I cannot understand why we cannot go there and help the civilians; even wounded fighters have the right to be treated according to international law,” he said.

In terms of the Syrian Government support, Mr. Egeland stressed two things: “We need permits to go to the remaining six besieged locations.”

He said that after the Munich meeting of the International Syria Support Group (ISSG) – comprised of the United Nations, the Arab League, the European Union and 18 countries and which has been seeking a path forward for several months – permission had been given to go to 12 out of the 18 besieged areas.

“[Permission to the] six remaining [areas] was not given then and has not been given since and it is, among other places, Darayya, where we believe the situation is very dire, very difficult for the civilians, and a place like Douma, which should be very easy to reach […],” he explained.

“And we need the Government of Syria to really help us with the medical areas,” said Mr. Egeland. “I hope that there will be a real breakthrough on this in our contacts with the government.”

On a positive note, he reported that the third convoy to the four towns – Madaya, Zabadani, Kafreya and Foah – has been able to go on its way, and permits have been issued for 15 new “hard-to-reach” locations, including some places in the Aleppo and Homs areas, where the needs have been growing and people have not received relief for months.

He also said that a vaccination programme will start at the end of April with the aim of covering all children that have not been vaccinated in Syria, expressing hope that “the humanitarian truces in connection with the vaccination campaigns will be successful and that will then end the fear of such epidemic disease.”

Asked about the impact of the announcement of the withdrawal of Russian forces from Syria, Mr. Egeland that “the impact of less fighting has been very clear” as “there is more access in more areas” compared to the situation during “the big bombardment period.”

“Well in many of the places where convoys had problems in getting through, Russia was among the countries that intervened and helped enable convoys to get through,” he said, citing a case in Moadamiyah, where a convoy was standing at checkpoints for more than 30 hours.

Regarding to planned air drops over Deir ez-Zor, an area controlled by Islamic State in Iraq and the Levant (ISIL/Da'esh), he said that due to concern that ISIL may have surface-to-air missiles, the operation must be conducted from high in the sky, adding that parachutes had failed in two trials. But new parachutes are on their way, he said, expressing hope that “before too long, maybe another ten days, we will be able to succeed.”

Asked about relief aid being seized by fighters, he said that there are no systematic or credible reports that relief is failing to reach the civilian population.

On detainees, he said “nothing would be more important now than to get out some groups, in particular women, children, the sick and the wounded among the detainees.” 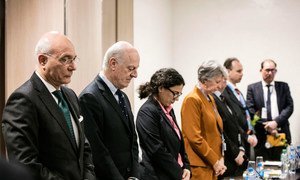 On a day that began with a minute of silence in honour of those that have lost their lives during the five-year conflict in Syria, the United Nations envoy mediating peace talks among the Syrian parties gave a progress report, saying that opposition representatives raised the issue of detainees today, as well as humanitarian aid to Daraya and other sites of heavy fighting.