The United Nations Special Rapporteur on the situation of human rights in Cambodia today announced she will be visiting the country Monday to assess the enjoyment of rights by women and indigenous peoples in the country.

“I will be focusing on discrimination during my second official visit to Cambodia, examining the situation of marginalised and disadvantaged groups, such as women, indigenous peoples, and victims of race and ethnic discrimination,” Rhona Smith said in a press release.

“A closer examination of the human rights situation with respect to marginalised and disadvantaged groups in the country will enable me to assist the Government’s efforts to achieve an equitable and prosperous society,” she added, while stressing that the visit will also allow her to assess progress on other human rights issues in Cambodia.

During her 10-day visit, Ms. Smith will meet with senior members of the Royal Government as well as the Senate and the National Assembly. She will also meet with representatives from civil society, the UN country team and the diplomatic community. The independent human rights expert is also expected to undertake field visits to gather first-hand information.

The UN Special Rapporteur undertakes regular visits to Cambodia and reports annually to the Human Rights Council. Since her appointment in March 2015, she conducted a visit to the country in September 2015, and shortly after, reported to the Council’s 30th session, which renewed the mandate for a further two years. Ms. Smith will present her next report to the Human Rights Council in September 2016. 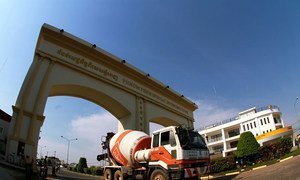 The United Nations International Labour Organization (ILO) today called on Cambodian workers, trade unions, Government and employers to engage in dialogue to resolve a confrontation in the Special Economic Zones in Bavet City and enable a return to work.