The United Nations Population Fund (UNFPA), the lead UN agency for delivery of a world where every pregnancy is wanted, every childbirth is safe and every young person’s potential is fulfilled, today appointed actor and activist Ashley Judd as its Goodwill Ambassador.

“Ashley and UNFPA will be joining forces to raise awareness of the huge work that still needs to be done across the world to stop women dying giving life and to empower women to choose when and how often to become pregnant,” said UNFA Executive Director, Dr. Babatunde Osotimehin.

In a press conference with Dr. Osotimehin announcing the appointment, Ms. Judd told journalists that that it was an “honour” to be appointed as UNFPA’s Goodwill Ambassador and to advocate for women’s rights.

“At the heart of sustainable development is the ability of a woman to regulate her fertility,” Ms. Judd said.

She also spoke out about violence against women, saying that the family is often the seat of gender-based violence and other violations of human rights.

In a press release, UNFPA commended Ms. Judd for her strong commitment to social justice and passionate advocacy of the right of every girl and boy to enter adulthood safely and empowered.

“Being a girl is not a crime, it is a privilege,” she said. “I am excited to do what I can to help girls and women everywhere contribute to their potential – which is indeed awesome – to the progress of all humankind.”

Ms. Judd’s appointment comes at the opening of the historic 60th session of the UN Commission on the Status of Women, the principal global intergovernmental body exclusively dedicated to the promotion of gender equality and the empowerment of women. The priority theme for the 60th session is women’s empowerment and its link to sustainable development.

Goodwill Ambassador Judd will give the keynote address tomorrow, at a special event at the UN General Assembly Hall, using words and music to call for an end to female genital mutilation (FGM), child marriage and son preference.

♦ Receive daily updates directly in your inbox - Subscribe here to a topic.
♦ Download the UN News app for your iOS or Android devices.
UNFPA 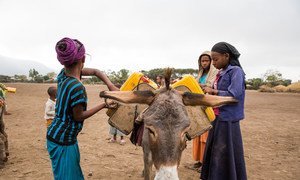 Investing in adolescent girls – especially in their education and reproductive health and rights – will ensure sustainable development for all, according to United Nations officials, government representative, experts, and young women who gathered today at an event at UN Headquarters.