UNICEF/Richard Nyamanhindi
A boy in rural Zimbabwe holds a handful of dried Amarula fruit seed which he will eat for lunch. Some school children are skipping meals and foraging for wild fruit as food stocks run out, due to the current drought, associated with El Niño.
15 March 2016

Zimbabwe is facing its worst malnutrition rates in 15 years, as nearly 33,000 children are in urgent need of treatment for severe acute malnutrition, according to the United Nations Children’s Fund (UNICEF).

The agency reported today that the number of hungry families in the country has doubled in the last eight months. A national vulnerability assessment survey released in February shows nearly 2.8 million people in rural Zimbabwe, or 30 per cent of the rural population, will require food assistance, of which 1.4 million were children.

“Families in rural Zimbabwe are locked in a struggle for survival after two consecutive seasons of failed rains, attributed to the El Niño weather phenomenon,” UNICEF spokesperson Christophe Boulierac told reporters in Geneva.

Those seasons of failed rains had diminished food harvests and reserves, increased hunger and malnutrition, dried up water sources and decimated livestock, he said.

As often in such cases, children are enduring the greatest force of the crisis. Overall, 2.1 per cent of children under five years old in Zimbabwe have severe acute malnutrition, exceeding the international threshold of two per cent that indicates the need for an emergency response, he noted. The majority of children with severe acute malnutrition are between one and two years old.

In this situation, he added, children face increased risks of child labour, early marriage and violence, and there are also risks of disease arising from the lack of access to safe water.

In response to a question, Mr. Boulierac said that the Zimbabwean Government has declared a state of disaster and has launched an appeal for $1.5 billion, but it was not known how much of that sum has been raised. UNICEF is appealing for $21 million, out of which $430,000 has been mobilized so far.

♦ Receive daily updates directly in your inbox - Subscribe here to a topic.
♦ Download the UN News app for your iOS or Android devices.
Zimbabwe 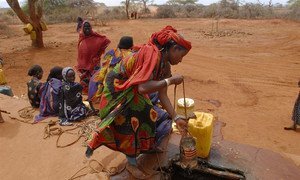 Across eastern and southern Africa, millions of children are at risk from malnutrition, hunger, water shortages and disease, the United Nations Children's Fund (UNICEF) warned today, citing two years of erratic rain and drought combined with one of the most powerful El Niño events in the past 50 years.