Marking the fifth anniversary of the Syrian conflict, Secretary-General Ban Ki-moon today appealed to the stakeholders and the Security Council to fulfil their responsibilities and to help make the United Nations-mediated peace talks a success.

“If we miss this opportunity the consequences for the Syrian people and the world are too frightening to contemplate,” the Secretary-General said in a message aimed at the Syrian parties, regional and international stakeholders and the Council.

Terrorist groups such as Daesh and Al Nusra Front have capitalised on the chaos, with foreign fighters and sectarian militias continuing to pour into Syria, Mr. Ban said.

The conflict “has been the scene of the use of chemical weapons, siege and starvation as a tool of war, unlawful detention, torture, and the indiscriminate and criminal shelling and aerial bombardment of civilians,” said Mr. Ban.

Syrian men, women and children feel abandoned by the international community, he said, urging those responsible for these crimes to be held to account.

“I repeat my call to the Security Council to refer the situation in Syria to the International Criminal Court,” Mr. Ban said. “In Syria as elsewhere, peace without justice is not sustainable.”

Meanwhile, the intra-Syrian talks commenced this week with UN Special Envoy for Syria Staffan de Mistura at the helm. The talks are being convened in the context of the full implementation of the Geneva Communiqué as the basis for a Syrian-led political transition.

Reacting today to the announcement by President Vladimir Putin that Russia is withdrawing the bulk of its forces from Syria, Mr. de Mistura called it a “significant development” which “we hope will have a positive impact on the progress of the negotiations.”

As the peace negotiations continue in Geneva, there are nearly five million refugees who had been forced to flee to neighbouring countries.

The UN High Commissioner for Refugees, Filippo Grandi, and the agency’s Special Envoy, Angelina Jolie Pitt, today called on Governments to follow through on financial pledges, as well as jobs, education, and other forms of international support for refugees.

“A tragedy of this scale demands solidarity beyond funding. Put simply, we need more countries to share the load by taking a greater share of refugees from what has become the biggest displacement crisis of a generation,” said Mr. Grandi.

Five years on, the conflict has spawned 4.8 million refugees in neighbouring countries, hundreds of thousands in Europe, and 6.6 million people displaced inside Syria against a pre-war population of over 20 million.

In London last month, Governments pledged $5.9 billion for the 2016 appeal for humanitarian and development aid. In today’s statement, Mr. Grandi called for additional forms of support, including better access to livelihoods and educations, and a greater sharing of responsibility by countries that are limiting and blocking numbers of refugees seeking safety in their borders.

The international community is at a “crossroads,” he said, and “if the world fails to work together due to short-term interests, lack of courage and knee-jerk reactions to shift the burden elsewhere, we will look back ruefully on this lost opportunity to act with solidarity and shared humanity.”

Call for reason, calm and foresight

In Lebanon, Ms. Jolie Pitt today marked the “grim anniversary” by helping the UN agency in an informal refugee settlement in Fayda, in Lebanon’s Bekaa Valley.

Children use large, plastic buckets to collect drinking water from a nearby water point, in the Fayda informal tented settlement, in the Bekaa Valley, Lebanon. Photo: UNICEF/Shehzad Noorani

Speaking to reporters in pouring rain, she urged Governments to focus on the absolute root causes, and to display courage and foresight in their decisions.

“My plea today is that we need governments around the world to show leadership: to analyse the situation and understand exactly what their country can do,” she said, to figure out how many refugees can be assisted and in what time frame, and to address the fears among their citizens.

“That starts with having a very robust asylum procedure to be able to hear the needs of the desperate families to identify who is most vulnerable and who has a genuine refugee claim,” she explained.

She appealed also for Governments to uphold the 1951 Convention on Refugees and basic human rights law: “it is both necessary and possible to protect people fleeing persecution and death and protect citizens at home. It should not be reduced to a choice between one or the other.”

The Special Envoy acknowledged that people in many different countries have fears about the refugee situation and its potential impact on their communities, livelihoods and security.

“It is not wrong to feel unsettled faced by a crisis of such complexity and such magnitude.

But we must not let fears get the better of us,” she said. “It is a time for reason and calm and foresight.”

Later this month, UNHCR will host a high-level international conference in Geneva , calling on Governments for a major increase in countries hosting Syrians.

To date, some 170,000 such places have been pledged by governments around the world. UNHCR hopes to increase that to at least 10 per cent of the registered refugee population, currently at 4.8 million people in the immediate surrounding region alone, over the next few years.

Secretary-General Ban and High Commissioner Grandi will open the ministerial-level meeting on 30 March. 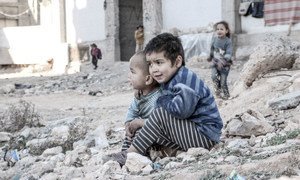 Talks resumed today between representatives of the Government and those of the opposition in Syria, where the United Nations envoy overseeing the discussions said a “fragile” cessation of hostilities has been holding for 18 days.