An independent United Nations human rights expert today warned that repression remains unabated in the Democratic People’s Republic of Korea (DPRK) and the country’s authorities continue to exercise the strictest control over all aspects of its citizens’ lives.

“The totalitarian governing structure in North Korea absolutely denies rights to its people and its unchecked power appears as strongly entrenched as ever throughout the whole country,” Marzuki Darusman, Special Rapporteur on the situation of human rights in that country, said as he presented his latest report to the Geneva-based UN Human Rights Council.

“The international community must ensure that the senior DPRK leadership, including Mr. Kim Jong Un, are held accountable for the crimes against humanity committed in the country,” he said.

Recalling that DPRK conducted its fourth nuclear test on 6 January 2016 and launched a long-range missile on 7 February 2016, Mr. Darusman stressed that “the denial of human rights to its citizens internally has made resources available to embark on the path of an aggressive military buildup; these are basically two sides of the same coin.”

Mr. Darusman added that, following those military tests, there are increasing references by a number of concerned Governments to a peace treaty to replace the armistice agreement that concluded the Korean War.

“Accountability for crimes against humanity must be an integral part of any discussion about the future of the Korean peninsula, including the scenario of a peace treaty,” he said, underscoring a role played by the international community in ensuring accountability for such crimes.

He also highlighted the possible roles to be played by neighbouring countries, like the Republic of Korea and Japan, which are State parties to the Rome Statute of the International Criminal Court (ICC).

Touching upon the principle of universal jurisdiction that could open the possibility of prosecution in a second country, the special rapporteur called for the establishment of a group of experts to study possible accountability measures. 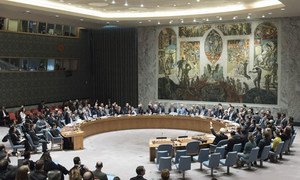 The United Nations Security Council today unanimously adopted a resolution that imposes new sanctions and tightens some of its existing measures against the Democratic People's Republic of Korea (DPRK), due to the country's ongoing nuclear and ballistic missile-related activities that “threaten international peace and security.”