UNICEF Ethiopia/Zerihun Sewunet
Girls in Lode Lemofo kebele, located in the Great Rift Valley of Ethiopia, place their water jerrycans on a donkey after filling it from a newly built water point.
11 March 2016

Investing in adolescent girls – especially in their education and reproductive health and rights – will ensure sustainable development for all, according to United Nations officials, government representative, experts, and young women who gathered today at an event at UN Headquarters.

According to the UN Population Fund (UNFPA), there are currently 600 million adolescent girls with specific needs, challenges and aspirations for the future whose welfare is fundamental to achieving key economic and social objectives – including a competitive labour force, sustained economic growth, improved governance and vibrant civil societies.

Meanwhile, studies show that the longer girls stay in school, the more they can earn and the smaller they choose their families to be. Each year of secondary schooling reportedly increases girls’ future wages by up to 20 per cent, and when women and girls earn income, they reinvest 90 per cent of it into their families – two or three times as much as men do.

Speaking at the event, organized by UNFPA and UN Women ahead of next week’s Commission on the Status of Women, Deputy Secretary-General Jan Eliasson said it should not “take an act of courage” to go to school, but that in too many parts of the world, girls risk their lives just to attend class.

“A girl should not be forced to marry so young that her body is not ready for reproduction. But too many are engaged to be married when they, in fact, should be learning to read. Adolescent girls should never be a battleground in war. But we know that in conflicts, girls are raped with the intention of humiliating, demoralizing and breaking the whole community,” he stated.

Noting that girls who are subject to poverty, early marriage, female genital mutilation, abuse and other violations hold a great potential for progress in their homes and the world, Mr. Eliasson recalled that the UN has had a mandate for gender equality since the day it was founded.

“The opening lines of our Charter commit us to ‘the equal rights of men and women,’” he underlined. “And now we have a new, monumental push for equality with the 2030 Agenda for Sustainable Development.”

The Sustainable Development Goals (SDGs), which comprise this Agenda, commit the global community to giving all girls the opportunities they deserve on their path to adulthood. They aim to ensure access to sexual and reproductive health information as well as services to help them avoid unwanted pregnancy and stop the spread of sexually transmitted diseases.

“Complications from pregnancies and deliveries are one of the leading causes of death for girls aged between 15 and 19,” said Phumzile Mlambo-Ngcuka, Executive Director of UN Women. “Girls who have been subjected to [female genital mutilation] are especially prone to birth complications.”

Ms. Mlambo-Ngcuka added that UN Women is calling for all countries to repeal discriminatory laws that create barriers for women and girls in education, access to health care, decent jobs and equal pay.

“Investments in infrastructure [is needed] so that girls do not have to miss school fetching drinking water or fire wood, or for personal hygiene needs that are not met in the schools themselves,” she insisted.

Grace Gyimah-Boaten, a Ghanaian woman invited to speak at the event, highlighted that she is a medical doctor today because she grew up in an enabling environment that helped her develop.

“Sadly, this is not the case for millions of other adolescent girls and we need to change this. Let us rise up for girls,” she declared, adding that there is no more time to waste.

♦ Receive daily updates directly in your inbox - Subscribe here to a topic.
♦ Download the UN News app for your iOS or Android devices.
girls 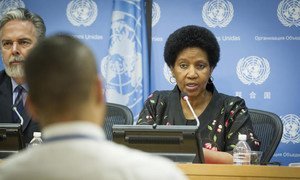