'World has much to learn from Japan,' UN chief says on anniversary of earthquake, tsunami

The world has much to learn from Japan if it is to make progress on saving lives and livelihoods, and reducing disaster losses, United Nations Secretary-General Ban Ki-moon underlined on the fifth anniversary of the Great East Japan Earthquake and Tsunami.

“This was an unprecedented disaster which taught us all a great deal about the changing nature of exposure to risk and disaster,” the UN chief said in a message.

On 11 March 2011, more than 20,000 people were killed in eastern Japan when an earthquake and tsunami hit the country's coastline. The tsunami also slammed into the Fukushima Daiichi nuclear power station, located in Fukushima Prefecture, disabling cooling systems and leading to fuel meltdowns in three of the six units. The accident shook the nuclear industry, regulators and governments.

“After Fukushima, it became clear that we are in a new era in which technology and natural disasters can combine to create danger on a previously unimaginable scale. Our dependence on technology is a double-edged sword, if we do not reduce our exposure to natural hazards,” Mr. Ban stressed.

“The Great East Japan Earthquake and Tsunami helped shape the Sendia Framework for Disaster Risk Reduction, which was adopted at the Third UN World Conference on Disaster Risk Reduction a year ago,” Mr. Ban highlighted. “The Framework extends the remit of disaster risk management to include both man-made and natural hazards, as well as related environmental, technological and biological hazards and risks.”

He further noted that “Japan has shown the world how important it is to pause for reflection, to examine the lessons learned from past calamities and to raise public awareness of the importance of prevention and mitigation.”

In addition, starting in 2016, World Tsunami Awareness Day will be commemorated on 5 November. It marks the day in 1854 when a tsunami struck the Japanese village of Hiromura; a farmer, who recognized the warning signs, set his rice sheaves alight to alert his neighbours to the coming danger.

“Acting for the common good is a frequent theme in Japanese culture and it infuses the country's approach to disaster preparedness and risk reduction. The rest of the world has much to learn from Japan, if we are to make progress on saving lives and livelihoods, and reducing disaster losses,” the Secretary-General said.

“On this solemn day of remembrance, I would like once again to extend my condolences, and those of the whole United Nations system, to the people of Japan and especially to those who lost loved ones in the Great East Japan Earthquake and Tsunami,” he added.

Also today, Robert Glasser, Head of the UN Office for Disaster Risk Reduction (UNISDR), attended the 5th anniversary memorial service in Tokyo and extended sympathies to the bereaved and those who are still displaced from their homes.

“The earthquake, the tsunami and the nuclear emergency which unfolded on that day resulted in a multi-systems collapse as a result of an unprecedented combination of man-made and natural hazards,” he said in a press release. “This disaster has profoundly shaped our understanding of disaster risk in a world which is hugely dependent on technology for its smooth functioning.”

He recalled last year’s adoption by Member States of the Sendai Framework for Disaster Risk Reduction, which extends the remit of disaster risk management to include environmental, technological and biological hazards. “In many ways this shift in attitudes to go beyond a focus on natural hazards is due to events here in Japan five years ago,” he noted. 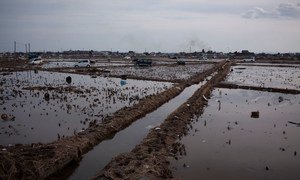