Formal cooperation among judges is essential in bringing individuals charged with terrorism-related crimes to justice and ensuring that the rule of law is upheld throughout the process, according to officials at a United Nations event that for the first time brought together Supreme Court justices to discuss how terrorism cases are handled in their respective countries.

“Member States must ensure that they provide access to justice for all and work to strengthen institutions, including the judicial,” he told the event, organized by the Counter-Terrorism Committee Executive Directorate (CTED).

He stressed the importance of “effective, accountable and inclusive” justice not only for the victims and the perpetrators, but also for ensuring public confidence in the judicial process.

He pledged the UN's commitment to strengthening support to these efforts, telling the judges that “ultimately it is your work at the local, national and regional levels that will have the most impact.”

United States Supreme Court Associate Justice Stephen Breyer provided an overview framing the issues that would be discussed in an interactive panel, namely the role of the country's top judiciary during times of conflict.

Echoing the idea that greater cooperation is useful between judicial representatives, he characterized being a judge as “not a gregarious job; it is a rather lonely job.”

He began by quoting the Roman philosopher, Marcus Tullius Cicero, who said: “In times of war, the law falls silent.” He then noted some key judicial moments from US history, including political and social challenges when the Supreme Court's decisions were ignored, such as immediately after the 1954 landmark case on racial segregation, Brown v. Board of Education of Topeka.

In the context of war and anti-terrorism measures, the top court cannot write the government a blank check, the Justice said, before asking – then what colour is the check? How is this done in different Supreme Courts? And how do you create a rule of law where people agree to do it?

Speaking of his experience in Afghanistan, Supreme Court Justice Abdul Rasheed Rashid discussed the physical security threats facing judges in his country, and praised the people of Afghanistan for being “really courageous even if the kind of terrorism we have here is one of the worst.”

Justices from Bangladesh, India, Sri Lanka, Nepal and Bhutan also participated. From Pakistan, Justice Asif Khosa, stressed that the main principle of a judge is to be fair, irrespective if the perpetrator is alleged to be a terrorist or a more common criminal.

“In the name of terrorism, I cannot brutalize justice,” he said.

The discussion was held under the umbrella of CTED's cooperation with the Global Center on Cooperative Security and the South Asia Judges Project, which consists of a series of workshops for judges, attended by representatives of all member States of the South Asian Association for Regional Cooperation (SAARC) [Afghanistan, Bangladesh, Bhutan, India, the Maldives, Nepal, Pakistan and Sri Lanka], as well as by prosecutors and police officers from all the SAARC countries.

In the second half of the event, judicial representatives discussed the cooperation and support necessary to support senior judges in leading a criminal justice response to terrorism.

One of the main issues that evolved was that terrorists should not be able to take advantage of legal loopholes or differences between jurisdictions in a country or between countries, in order to absolve themselves of wrongdoing.

In his closing remarks, Jean-Paul Laborde, the Executive Director of CTED, said today's event would be a first step in giving Supreme Court justices access to the global institution so that they can continue to become familiar with the international challenges and debates.

He noted that judges need to be able to stay abreast of the flexibility and the speed of action of these terrorist organizations, to be fully aware of the type of response that needs to be provided at the judiciary level.

“We in the Security Council and the CTC [Counter-Terrorism Committee] need to raise our voice and give judges this ability to administer justice, to be able to speak with States, to be able to take action against these situations,” he added. 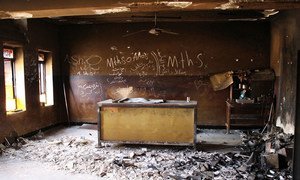 At a Headquarters conference on the human rights of terrorism victims, the top United Nations political official today urged Member States to engage with victims of terrorism and violent extremism, especially the young and the vulnerable, to build on previous commitments and ensure that their human rights are fully respected.