“Since this emergency committee on Zika virus first met on 1 February, substantial new clinical and epidemiological research has strengthened the association between Zika infection and the occurrence of fetal malformations and neurological disorders,” Margaret Chan, the

Director-General of WHO, told reporters at a press conference following the second meeting of the committee.

She highlighted that the geographical distribution of the disease is wider, the risk group is broader, and imported cases of Zika have been reported from every region in the world.

“Local transmission has now been reported in 31 countries and territories in Latin America and the Caribbean. In this region, cases of dengue, which is carried by the same mosquito species as Zika, typically increase during the rainy season, which lasts from January to May. We can expect to see more cases and further geographical spread,” Dr. Chan warned.

Concerning the link with fetal malformations, the virus has been detected in amniotic fluid; evidence shows it can cross the placental barrier and infect the fetus.

“We can now conclude that Zika virus is neurotropic, preferentially affecting tissues in the brain and brain stem of the developing fetus,” the Director-General stated. “Zika has been detected in the blood, brain tissue, and cerebrospinal fluid of foetuses following miscarriage, stillbirth, or termination of pregnancy.”

According to WHO, microcephaly is now only one of several documented birth abnormalities associated with Zika infection during pregnancy. Grave outcomes reportedly include fetal death, placental insufficiency, fetal growth retardation, and injury to the central nervous system.

To date, microcephaly has been documented in only two countries: French Polynesia and Brazil. However, Dr. Chan indicated that intense surveillance for fetal abnormalities is currently under way in countries like Colombia, where the outbreaks started later than in Brazil.

Nine countries are now reporting an increased incidence of Guillain-Barré syndrome (GBS) or laboratory confirmation of a Zika virus infection among GBS cases. A retrospective case-control study of GBS associated with Zika in French Polynesia recorded no deaths, but the disease progressed rapidly and a large percentage of patients required admission to an intensive care unit for as long as 51 days.

“Growing evidence of a link with GBS expands the group at risk of complications well beyond women of child-bearing age,” Dr. Chan stressed. “GBS has been detected in children and adolescents but is more common in older adults and slightly more common in men. The anticipated need for expanded intensive care adds a further burden on health systems.”

She further warned that reports and investigations from several countries strongly suggest that sexual transmission of the virus is more common than previously assumed.

“All of this news is alarming. Women who are pregnant in affected countries or travel to these countries are understandably deeply worried. I convened this second meeting of the Emergency Committee to gather expert advice on the strength and significance of these new research results. We also asked the experts whether the findings warrant changes in WHO recommendations to countries,” Dr. Chan explained.

Asked about the existence of any new travel measures, WHO’s Executive Director on Communicable Disease, David Heymann, said the onus is on countries to identify and report where they have outbreaks. “Then it will be up to pregnant women or women who are planning to conceive to decide based on the information given to them […] whether or not to travel,” he said.

Meanwhile, the Board of Governors of the International Atomic Energy Agency (IAEA) today announced a new 2.3 million euro initiative to help countries in Latin America and the Caribbean fight the Zika virus with a nuclear technique that has been used to suppress various insect pests.

The UN’s nuclear watchdog said it will donate special equipment and train local staff on the use of the technique against the Aedes mosquito, which carries the virus.

“The project will strengthen national and regional mechanisms for control of the Aedes mosquito population,” said IAEA Director General Yukiya Amano, noting that the initiative complements the agency’s immediate support in the wake of the Zika outbreak to help rapid detection of the virus. 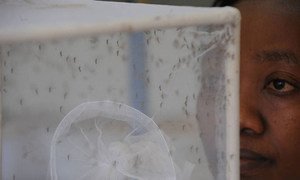 The above-average rainfall caused by El Niño that is expected in parts of South America until May could cause floods and increases in diseases spread by mosquitoes, including malaria and the Zika virus, the World Health Organization (WHO) has warned.