The top United Nations human rights official today urged United States authorities to proceed with great caution in their legal efforts to break the encryption on an iPhone linked to the investigation into the mass killings in San Bernardino, California, saying the case could have broader implications for digital security and human rights.

UN High Commissioner for Human Rights Zeid Ra'ad Al Hussein said in a statement that the ongoing legal process involving the Apple computer company and the US Federal Bureau of Investigation (FBI) “is not just about one case and one IT company in one country. It will have tremendous ramifications for the future of individuals' security in a digital world which is increasingly inextricably meshed with the actual world we live in.”

According to reports, on December 2, 2015, 14 people were killed and 22 were seriously injured in an attack at the Inland Regional Center in San Bernardino, California, which consisted of a mass shooting and an attempted bombing. Subsequently, the FBI has requested Apple to unlock the iPhone of one of the shooters to access encrypted data.

Mr. Zeid notes that the FBI deserves “everyone's full support” in the probe, but that this case is “about where a key red line necessary to safeguard all of us from criminals and repression should be set,” said the UN human rights chief.

A successful case against Apple will set a precedent that may make it impossible for any other major international IT company to safeguard their clients' privacy anywhere in the world, he warned. This could potentially be a “gift” to authoritarian regimes and criminal hackers.

“In order to address a security-related issue related to encryption in one case, the authorities risk unlocking a Pandora's Box that could have extremely damaging implications for the human rights of many millions of people,” Mr. Zeid said.

“Without encryption tools, lives may be endangered,” he said. “In the worst cases, a Government's ability to break into its citizens' phones may lead to the persecution of individuals who are simply exercising their fundamental human rights.”

“In an age when we store so much of our personal and professional lives on our smart phones and other devices, how is it going to be possible to protect that information without fail-safe encryption systems,” Mr. Zeid asked.

He said the debate around encryption is too focused on security, and overlooks that weakening encryption protections may bring even bigger dangers to national and international security.

He urged US authorities to use the Apple-FBI case as a starting point for a “much-needed profound examination of the highly complex and constantly evolving issues relating to privacy and security in the digital age.”

Mr. Zeid also called on the Human Rights Council, now underway in Geneva, to continue to examine the impact that digital and new technologies have on human rights across the globe.

♦ Receive daily updates directly in your inbox - Subscribe here to a topic.
♦ Download the UN News app for your iOS or Android devices.
communications

On World Radio Day, UN officials urge use of radio as 'lifeline' in human progress 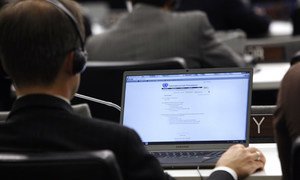