UN Photo/Nektarios Markogiannis
Polling station in Bangui for the second round of elections in Central African Republic, February 2016.
4 March 2016

The United Nations today, in a joint statement with other multilateral organizations, welcomed the final results of the second round of the presidential elections in the Central African Republic (CAR) announced earlier this week, congratulating President-elect Faustin-Archange Touadéra.

On 1 March, the Transitional Constitutional Court announced the outcome of the run-off between two former prime ministers, Mr. Touadéra and Anicet-Georges Dologuélé. About 62 per cent of voters chose Mr. Touadera, according to media reports.

The UN, the African Union (AU), the Economic Community of Central African States (ECCAS), the European Union (EU) and the International Organization of La Francophonie expressed their support for the determination of the President-elect to further the efforts to promote dialogue and national reconciliation.

They also paid tribute to Mr. Dologuélé and the Central African people, who have demonstrated their commitment to efforts to find durable solutions in support of peace, reconciliation, and economic and social development in their country.

Welcoming the essential role played by the Transitional Authority in support of a return to peace, the organizations reiterated their commitment to continue efforts to support the completion of the transition, including through the holding of the second round of legislative elections.

The international community will continue to lend its support to the efforts of the new Central African Republic authorities through a responsible partnership, they said.

The country plunged into a crisis in early 2013 when François Bozizé, President at that time, was ousted by mainly Muslim Seleka fighters. Christian anti-Balaka militias responded by attacking the Muslim minority.

The UN has played a major role in seeking to restore peace in the country, with military and police units from the 11,000-strong UN Multidimensional Integrated Stabilization Mission in the country (MINUSCA) joining soldiers from the French Sangaris force and local security teams at polling stations to ensure a peaceful vote on 30 December 2015. 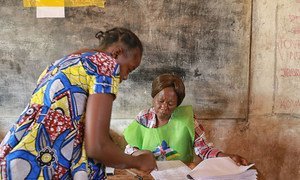 United Nations Secretary-General Ban Ki-moon has commended the peaceful holding of elections in the Central African Republic (CAR) this past Sunday, calling for the timely holding of the second round of legislative elections to complete the political transition process.