The situation of lead-contaminated water in Flint, Michigan, is fundamentally about human rights, a group of United Nations experts today said, urging the United States to protect the rights of children and others who are most at risk from pollution and toxic chemicals.

“No parent should have to endure the mental torment that will haunt parents in Flint, and no child should be denied the right to enjoy the highest attainable standard of physical and mental health,” said the experts, whose expertise include hazardous wastes, health, water and sanitation, indigenous peoples, minorities, and racism.

The experts commended US President Barack Obama for declaring a Federal state of emergency to accelerate the distribution of bottled water and filters in flint, but said that “much more must be done to protect those who live in vulnerable situations and to restore a safe permanent water supply.”

These steps include ratification by the US Government of the Convention on the Rights of the Child and the International Covenant on Economic, Social and Cultural Rights, without reservation, among others.

The majority of the population in Flint is predominantly African-American, and many residents live below the poverty line. This has drawn international attention to the toxic threats faced by children, particularly minority and poor communities across the country.

The experts noted that lead is only one of many toxic chemicals to which residents in those communities are often disproportionately exposed.

Citing a recent study which reportedly shows that minorities across the US comprise nearly half the population living near potential sources of toxic emissions, the experts said that some 1.6 million children under the age of five live in hazardous areas where their bodies are particularly vulnerable to adverse health impacts of toxic chemical exposure.

Nearly twice as many African-American children across the country have high levels of lead in their blood as compared with white children, 5.6 per cent versus 2.4 per cent, respectively.

The UN Special Rapporteurs work on a voluntary basis; they are not UN staff and do not receive a salary for their work. They are independent from any government or organization and serve in their individual capacity.

The group that made today’s appeal includes: 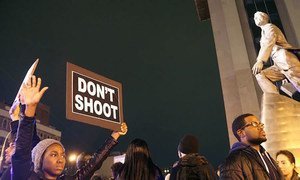 The legacy of slavery, post-Reconstruction ‘Jim Crow’ laws and racial subordination in the United States remains a “serious challenge” as there has been no real commitment to recognition and reparations for people of African descent, a United Nations expert panel said today in Washington D.C., at the end of its second official visit.