Amid signs of hope in Syria, UNICEF chief sees 'harsh evidence' of war's toll on children

UNICEF/UN011402/El Ouerchefani
A child watches a truck carrying humanitarian aid for the besieged town of Moadamiyeh in February. In all, UNICEF delivered 16 truckloads of winter clothing and diapers.
2 March 2016

Wrapping up his visit to Syria, the head of the United Nations children's agency has urged both the Government and armed opposition groups to facilitate access to all children in need, especially so the UN and its partners can implement a nationwide immunization programme.

“Senior Government officials in Damascus have agreed that together with WHO [World Health Organization] and our partners, including the Ministry of Health, we can go ahead and immediately plan and seek to implement a nationwide immunization programme against childhood diseases,” UN Children's Fund (UNICEF) Executive Director Anthony Lake said yesterday in Homs.

“This will require sustained access in all besieged and hard-to-reach areas, and that both government and armed opposition groups facilitate access to all Syrian children,” he said.

“Everywhere I have visited – in Damascus, Homs, Hama and Al-Salameya – people spoke of hope,” Mr. Lake said. “Hope that there will be peace, hope that peace can be found in more than a diplomatic piece of paper, hope that peace will return in their daily lives. The children I met in their class rooms spoke of their hopes for their futures – as doctors, engineers, teachers.”

UNICEF Executive Director Anthony Lake visits a recreational activities session for children in a shelter for displaced families in Homs. He is accompanied by UNICEF staff and volunteers from the Syrian Arab Red Crescent (March 2014). Photo: UNICEF/NYHQ2014-0292/Sanadiki

He visited the encircled neighbourhood of Al Waer, where he saw things that he had not seen two years ago, such as shops open for business, people walking freely, children learning in classrooms above ground instead of huddling in basements for fear of snipers. Even in the shattered old city of Homs, people displaced by the fighting are returning.

But with that hope, there were still signs of havoc and harsh evidence of the toll the war has taken on children, he said. Entire neighbourhoods have been flattened. A children's centre in Al Waer, formerly an orphanage, was struck by a mortar attack two years ago, killing eight children and injuring 30 more.

In Homs, doctors took him into a surgical ward as they treated a victim who had just been shot in the face by a sniper. The doctors had only old surgical instruments with which to remove pieces of the patient's shattered jawbone. The anaesthetic medicine was past its expiry date.

He said that the doctors, nurses, and especially the father of the victim, expressed their anger – not only at the Government, which continues to deny access to surgical and medical supplies to such areas, but also at the United Nations and the whole world.

“We can't blame him because the world has allowed this suffering to go on for five long years,” Mr. Lake said.

Over the past five years, with our partners such as the Syrian Arab Red Crescent, UNICEF has reached more than 10 million people, mostly children, with water, health and nutrition services, education and supportive counselling.

But there are so many more children to reach, he said. There are more than eight million children who need assistance: six million inside Syria and more than two million who have fled the violence to neighbouring countries.

“For every time we educate a Syrian child, wherever she may be, we are helping build Syria's future,” he said.

Meanwhile, the UN Office for the Coordination of Humanitarian Affairs (OCHA) reported today that medical supplies that were initially not allowed to be included in convoys for Moadamiyeh in Syria by security services on the 29th of February have been delivered today. However, some surgical items were still rejected from entering the area.

The second round of inter-agency humanitarian convoys to the Four Towns - Madaya, Zabadani, Foah and Kafraya - is tentatively scheduled for Saturday. The Four Towns were last accessed on the 17th of February, when three joint convoys reached approximately 60,000 beneficiaries. 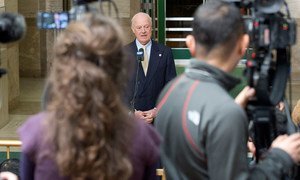