According to a press statement from Mr. de Mistura's Office, while 7 March had initially been set as the target date, the Special Envoy will now resume the talks two days later, allowing “adequate time to address logistical and practical matters.”

Mr. de Mistura had been mediating the Geneva-based talks, which officially kicked off last month, but on 3 February called for a pause following differences between Government and opposition delegations on the priority of humanitarian issues.

The announcement of the resumption of the intra-Syrian talks comes just days after the UN Security Council unanimously endorsed the joint statement announced last week by United States Secretary of State John Kerry and Russian Foreign Minister Sergey Lavrov, as co-chairs of the International Syria Support Group (ISSG) Ceasefire Taskforce, on the terms of a nationwide cessation of hostilities, which has been in effect since Saturday, 27 February.

Adopting a resolution, the Council also demanded that all parties involved in the cessation of hostilities fulfil their commitments, and urged all Member States, especially ISSG members – the Arab League, the European Union, the United Nations, and 17 countries, including the United States and Russia, who have been seeking a path forward for several months – to use their influence with the parties to ensure fulfilment of those commitments and support efforts “to create conditions for a durable and lasting ceasefire.”

The Council also demanded the “full and immediate” implementation of its resolution 2254 (2015) to facilitate a Syrian-led and Syrian-owned political transition in order to end the conflict, stressing once again that the nation's people “will decide the future of Syria.” That text, unanimously adopted in December, gave the UN an enhanced role in shepherding the opposing sides to talks for a political transition, endorsing a timetable for a ceasefire, a new constitution and elections.

Today, the statement from Mr. de Mistura's Office said that he is looking forward to Syrian participants' engagement in serious discussions with a view to implementing resolution 2254 (2015).

Earlier today, as part of his official visit to Geneva, UN Secretary-General Ban Ki-moon inaugurated the newly renovated Russian Salon at the Palais des Nations, at an event attended by Foreign Minister Lavrov. After the event, Mr. Ban held a meeting and the two agreed on the importance of urgently moving forward simultaneously on implementing the cessation of hostilities agreement, providing vital humanitarian assistance to civilians, and returning to political negotiations. 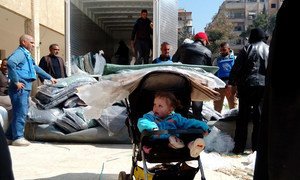 ‘Everyone is losing’ in the Syrian conflict, UN relief chief tells Security Council

While welcoming the recent announcement of a cessation of hostilities in Syria as a “long-awaited signal of hope,” the top United Nations humanitarian official today echoed the calls of the world body and the international community at large for the parties involved to work towards a more durable ceasefire and facilitate conditions for increased protection and humanitarian aid.