A United Nations rights expert today urged the Government of the Russian Federation not to implement an extradition treaty signed with the Democratic People's Republic of Korea (DPRK) earlier this month.

A United Nations rights expert today urged the Government of the Russian Federation not to implement an extradition treaty signed with the Democratic People's Republic of Korea (DPRK) earlier this month.

“I am alarmed by the new extradition treaty signed between the DPRK and the Russian Federation on 2 February 2016. The treaty calls for transferring and readmitting individuals 'who have illegally' left their country and stay 'illegally' in another's territory,” said Marzuki Darusman, the UN Special Rapporteur on the situation of human rights in the DPRK, in a press release.

There are an estimated 10,000 regular labourers from DPRK in Russia, some of whom stay in the country after their contracts have expired in order to seek asylum. Others fleeing the DPRK try to reach Russia through other countries, Mr. Darusman said.

The Special Rapporteur noted that in November 2015, Russia signed a separate extradition treaty with the DPRK, calling for mutual assistance in criminal matters.

“I am concerned that the latest treaty is much broader in scope and may lead to forced repatriation to the DPRK of individuals at risk of human rights violations, in contravention of Russia's international obligations,” he said.

Given the practice of the DPRK to send labourers to Russia, who often work in slave-like conditions, Mr. Darusman said, it is feared that such a treaty could also be used to capture and repatriate workers who attempt to seek asylum.

In fact, the practice of sending workers abroad to be exploited may constitute state-sponsored enslavement of human beings, possibly amounting to a specific category of crime against humanity, he emphasized.

The UN Commission of Inquiry on human rights in the DPRK, in its 2014 report, found that persons who are forcibly repatriated to the DPRK are commonly subjected to torture, arbitrary detention, summary execution, forced abortions and other sexual violence. At the time, the Commission called on countries to respect the principle of non-refoulement and abstain from forcibly repatriating any persons to the DPRK.

“I also note that the signing of the treaty took place against the context where the DPRK continues to commit deliberate belligerent acts, such as nuclear testing followed by the latest missile launch. Such acts adversely impact on the constructive efforts to address the ongoing gross human rights violations in the country, and reinforce even further the international community's resolve to pursue political and legal accountability,” Mr. Darusman said.

“I strongly urge Russia to respect the principle of non-refoulement and not to implement the treaty,” he added. 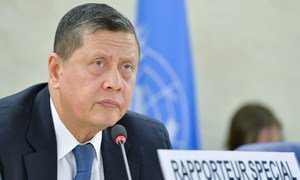 The United Nations Special Rapporteur on the situation of human rights in the Democratic People’s Republic of Korea (DPRK) today called on the international community to further all efforts to improve the human rights situation in the country.