UNICEF/NYHQ2015-2191/Georgiev
A young child eats a sandwich next to the tarpaulin that serves as a makeshift shelter, close to the town of Gevgelija, Former Yugoslav Republic of Macedonia, on the border with Greece (September 2015).
25 February 2016

The top United Nations human rights official expressed serious concern today over security measures adopted last week by the police chiefs of five European countries, which he warned are already negatively impacting the human rights of refugees and migrants in southern and central Europe and compounding the “already exceptionally difficult situation” in Greece.

Urging the five countries that adopted the measures – Austria, Croatia, the former Yugoslav Republic of Macedonia, Serbia and Slovenia – to “carefully recalibrate” the approach of their police forces, UN High Commissioner for Human Rights Zeid Ra'ad Al Hussein emphasized that the measures are exacerbating “the chaos and misery all down the line,” and especially in Greece, which is already overwhelmed.

“Alarmingly, given the primary duty of the police to protect people, the agreement contains no measures aiming at protecting these extremely vulnerable women, children and men on the move – there is, for example, not even a mention of special measures to protect people who might be particularly at risk of human rights violations, including children, persons with disabilities, LGBT persons, older people, victims of torture or victims of gender-based violence or trafficking,” Mr. Zeid said in a statement.

“Instead, the agreement appears to be solely concerned with applying stringent limitations of entry on people travelling along the so-called Balkan Land Route, and providing for the 'controlled transfer of migrants,' without sufficient safeguards,” he added.

The adoption of the police measures this past week followed the announcement by the Government of Austria of limitations both on the number of refugees to be accepted in 2016, and on the number of people who will be allowed to transit the country.

The latest reports suggest chain deportations are now taking place all the way down the Balkan land route, which includes Austria, Slovenia, Croatia, Serbia and the former Yugoslav Republic of Macedonia, towards Greece, Mr. Zeid said.

In addition, hundreds of Afghans were reportedly stranded for more than five days on the border between the former Yugoslav Republic of Macedonia and Serbia, and many other Afghans have been blocked from entering the former Yugoslav Republic of Macedonia from Greece, apparently solely on the basis of their nationality, he said.

Mr. Zeid also regretted certain authorities' reported refusal of entry to any people arriving at their borders, if they were unable to produce the documents specified in the agreement. Whether someone possesses a particular document has no bearing on whether they are a refugee, he said, adding that the lack of a valid document should never be a reason for refusing entry into an asylum procedure.

“I understand the challenge facing the authorities in some European countries who are trying to cope with large numbers of migrants arriving on, or transiting, their territory, and efforts to improve the management of the situation would be very welcome indeed.” Mr. Zeid said. “However, this extraordinary agreement by police chiefs establishes a policy across five states that includes measures which seem to be incompatible with the human rights obligations of the countries concerned, all of which are bound by international human rights and refugee law.”

Mr. Zeid also said the agreement by the five countries appears to authorize profiling people and limiting “entry on humanitarian grounds,” solely on the basis of their nationality and possession of identification documents, rather than on an individual assessment of whether or not they are in need of asylum or some other form of international protection of their human rights.

The agreement also establishes “extremely narrow criteria” for allowing entry – “fleeing war” – with no mention of “persecution,” which is the key criteria for recognizing refugees under the 1951 Refugee Convention and its 1967 Protocol and related international law, Mr. Zeid stressed.

He added that the “narrow focus” also appears to invalidate a number of other legitimate grounds according to which a person may be permitted to enter another State's territory under international and European human rights law.

Mr. Zeid noted the repeated calls by the UN refugee agency (UNHCR) and the UN Special Rapporteur on the human rights of migrants, Francois Crépeau, to the European Union (EU) to halt the continuous regression of the human rights of refugees and migrants.

He also urged the EU and other European countries to “take steps to counter the myth-making, stereotyping, racism and xenophobia which have so distorted and politicized the migration debate, undermining efforts to govern the movements of refugees and migrants in rational ways that both protect their rights and ease the management challenges the whole of Europe is facing.” 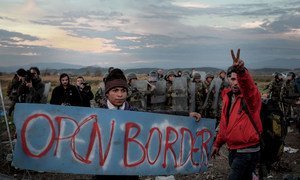 The United Nations refugee agency said today it is concerned by recent restrictive practices adopted in a number of European countries that are placing additional undue hardships on refugees and asylum-seekers across Europe, creating chaos at several border points, and putting particular pressure on Greece as it struggles to deal with larger numbers of people in need of accommodation and services.