OCHA
Women and children displaced from Jebel Marra, in North Darfur, due to fighting, take shelter in the Tawilla new arrivals site.
24 February 2016

The top United Nations humanitarian official in Sudan said today she is deeply concerned about the plight of more than 85,000 newly displaced civilians in North Darfur state who have fled their villages in recent days as a result of an escalation of conflict in the region’s Jebel Marra area.

The UN Resident and Humanitarian Coordinator for Sudan, Marta Ruedas, said in a press release that this past Monday, she visited

Tawilla, west of El Fasher on the fringes of the Jebel Marra, where more than 22,000 people, mostly women and children, have gathered in recent weeks next to an existing camp for displaced people.

“Seeing hundreds of women and children in Tawilla and speaking to the local authorities there very much brings it home: that civilians continue to bear the brunt of conflict every day and their protection is our paramount concern,” Ms. Ruedas stressed.

The UN, along with international and national organizations, and the Sudanese Red Crescent Society, are delivering assistance to those in need, and more is on the way, but the massive influx of new arrivals in recent days has “put a strain on what was an already logistically complex operation,” the UN official said.

Ms. Ruedas also said an 11-truck convoy left El Fasher yesterday with more aid, including food, for Sortony, where there are more than 63,000 newly-displaced people taking refuge next to a UN peacekeeping site.

To date, the United Nations and its partners have not been granted access to key locations reportedly affected by civilian displacement in Central Darfur, despite reports of wide-scale movement of people and potential emergency need.

Calling for immediate access to all people in need so that those affected can receive the humanitarian assistance they require, Ms. Ruedas in particular urged all parties to the conflict to allow the UN and its partners to reach displaced people in Central Darfur.

According to the Kebkabiya Smallholder Charitable Society, a non-profit organization, and Oxfam International, there are also 2,018 displaced people in Kebkabiya. This brings the total of displaced in North Darfur State as a result of the recent Jebel Marra hostilities to 87,502, the UN official said. 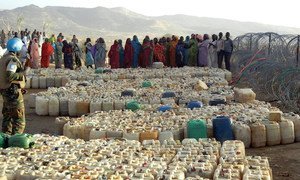 The number of civilians fleeing the recent conflict in the Jebel Marra area in Sudan’s Darfur region has jumped to 73,000 from 38,000, according to United Nations estimates, as some 30,000 people flocked to Sortony, where the displaced have been gathering next to a base operated by the African Union-UN Mission in Darfur (UNAMID).