UN Photo/Nektarios Markogiannis
In Bangui on 14 February 2016, an electoral officer (right) assists a voter at a polling station for the Central African Republic’s run-off presidential elections. A re-run of the 30 December 2015 legislative elections was also held.
21 February 2016

United Nations Secretary-General Ban Ki-moon has commended the peaceful holding of elections in the Central African Republic (CAR) this past Sunday, calling for the timely holding of the second round of legislative elections to complete the political transition process.

“The Secretary-General also extends his appreciation to presidential candidate Mr. Anicet Dologuele for the spirit of statesmanship demonstrated through his concession speech,” Mr. Ban said.

The Secretary-General also called on all political leaders and national stakeholders to continue to “maintain the constructive atmosphere and for all actors to maintain their commitments in line with the electoral Code of Conduct.”

The UN has played a major role in seeking to restore peace in the CAR, with military and police units from the 11,000-strong UN Multidimensional Integrated Stabilization Mission in the country (MINUSCA) joining soldiers from the French Sangaris force and local security teams last 30 December at polling stations to ensure a peaceful vote.

After nine months of improved stability in CAR, a new wave of inter-communal violence erupted this past September, killing at least 130 people, injuring 430 others, and triggering an 18 per cent increase in the number of internally displaced persons to 447,500. 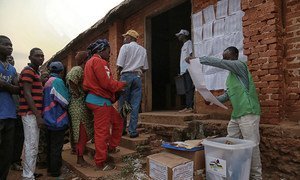 Ahead of polls, Ban calls on all Central Africans, including candidates, to ensure credible elections

United Nations Secretary-General Ban Ki-moon has called on all Central Africans, including the candidates, to ensure that the presidential run-off and the new round of legislative elections, set to take place Sunday, are conducted in a peaceful and credible manner.