From asthma to Zika, UN tackles links between environment and health

The list of health conditions that can be linked to environmental pollution and degradation is long and growing, including skin cancer, lung cancer, asthma, lead poisoning, mercury poisoning, malaria, Ebola and Zika, according to the United Nations Environment Programme (UNEP).

“The spread of Zika, just as with Ebola, has sent a strong signal to the international community that there is a need for increased attention to the linkages between environment and health,” UNEP Executive Director Achim Steiner said yesterday.

“There is a growing awareness that humans, through their intervention in the environment, play a vital role in exacerbating or mitigating health risks,” he added.

Mr. Steiner was addressing UNEP’s Committee of Permanent Representatives, a group of delegates representing more than 140 countries and major groups, who gathered at the agency’s Nairobi headquarters to prepare for the United Nations Environment Assembly (UNEA), the world's highest-level decision-making body on the environment, to be held at the end of May.

In his remarks, Mr. Steiner cited data from the World Health Organization (WHO), which has found that 23 per cent of all premature deaths around the world can be attributed to environmental factors. Among children, that figure rises to 36 per cent.

“Every year, nearly seven million people die because they are exposed to indoor and outdoor air pollution, from power generation, cookstoves, transportation, industrial furnaces, wildfires, or other causes,” he said.

“We are eating into an ecological infrastructure that not only sustains us, but protects us. The fallout from the footprint of human activity in the 21st century seems to grow every year,” he noted.

The UNEP chief also pointed out that more than two billion people live in water-stressed areas, 1,000 children die every day from water-borne diseases, and 42 million life years are lost every year due to natural disasters.

There is strong evidence that international action to protect the environment can have strong, positive impacts on human health, he said.

Thanks to the Montreal Protocol, which took effect in 1989, nearly 100 substances that deplete the ozone layer have been removed from circulation. Because of that progress, some two million cases of skin cancer will be prevented before 2030. And the removal of lead from fuel is already preventing over one million premature deaths each year.

A report on how the environment impacts human health will be launched at UN Environment Assembly. It will be the subject of a discussion among ministers on the implementation of the environmental dimension of the 2030 Agenda for Sustainable Development, which integrates the social, economic and environmental concerns of development.

A healthy environment presents opportunities for a healthier society, and it brings economic benefits as well. The phase out of ozone-depleting chlorofluorocarbons (CFCs) should result in a cumulative $1.8 trillion in global health benefits by 2060. Eliminating lead in gasoline on a global scale will boost global gross domestic product (GDP) by an estimated four per cent. And the return on investment in water and sanitation services is between $5 and $28 per dollar invested. 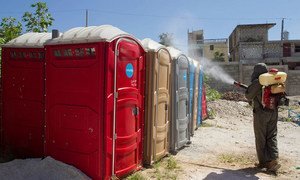 As World Health Organization officials briefed United Nations Member States in New York today on the Zika virus outbreak, the agency launched a global strategy to guide the international response to the spread of the virus and the neonatal malformations and neurological conditions associated with it.