OCHA
In At Tur, near Al Maqassad hospital in East Jerusalem, one of several roadblocks, placed by Israeli forces in October 2015 in Palestinian neighbourhoods, as the wave of violence across the occupied Palestinian territory and Israel continued.
18 February 2016

While violence erupting in Israel and Palestine is regrettably showing “no sign of relenting,” the United Nations and its Quartet partners are actively seeking the way forward, the UN envoy for the Middle East peace process told the Security Council today, urging both sides to end the long-standing conflict.

Painting a troubling picture of the situation during a quarterly briefing to the 15-nation body, Nickolay Mladenov, Secretary-General’s Special Coordinator for the Middle East Peace Process, said that the conflict has now arrived at “a pivotal point.” Israelis and Palestinians must now actively shape their future – with the dedicated support of the international community – “before the opponents of peace decide their fate for them,” he said.

The recent spiral of violence, which has to date taken at least 137 Palestinian and 19 Israeli lives, cannot be reversed by security means alone, he said, adding that leaders on both sides must show a political will to their people and stand up to incitement and the radicals among their own constituents.

Only genuine progress towards just peace that allows the people of Israel and the people of Palestine to live side by side in safe and secure borders will end the bloodshed and counter the rise of extremism, he said.

Over the last year, the United Nations, the United States, Russian Federation and the European Union, which comprise the diplomatic Quartet on the Middle East peace process, have engaged actively in seeking a way forward out of the deadlock, noted Mr. Mladenov.

The Quartet has sought how to preserve the two-state solution, and create the conditions that would allow the parties to return to meaningful negotiations on resolving the final status issues and ending the occupation that began in 1967. Meeting at the Principles level last week in Munich, the Quartet decided to prepare a report on the status quo, including recommendations on the way forward. The report should help build international consensus for the way ahead, he said.

Israel’s settlement enterprise continues to be an impediment to peace, and some Palestinian factions continue to glorify violence and terror, he said, urging both sides to stop activities that undermine the peace process.

Appealing to the leaders of both peoples and all international stakeholders, Mr. Mladenov said there are clear avenues out of the current political morass but they require unity of effort and bold, creative and courageous work of many. “The cold reality for the Israeli and Palestinian people is that all have failed them,” he said urging the two sides to work together to reach a solution. 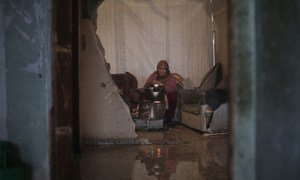 Condemning all acts of terror and urging restraint amid continuing violence against civilians, the United Nations and its Middle East Quartet partners today called on all parties to actively take steps to de-escalate current tensions between Israelis and Palestinians.