“The number of demolitions for just the first six weeks of 2016 is greatly alarming,” said Robert Piper, the UN Coordinator for Humanitarian Assistance and Development Aid for the occupied Palestinian territory, in a press release.

“Over 400 Palestinians have been displaced from their homes – equivalent to over half the total number of Palestinians displaced in all of 2015,” he added.

According to the UN, between 1 January and 15 February, Israeli forces destroyed, dismantled or confiscated 283 homes and other structures, displacing 404 Palestinians, including 219 children, and affecting another 1,150 Palestinians, who lost structures related to their source of income.

Over 100 of the demolished structures were already provided as humanitarian assistance to families in need, often in the wake of an earlier demolition. These incidents reportedly occurred in 41 Palestinian locations, many in Palestinian Bedouin or herder communities in Israeli-controlled Area C.

“Most of the demolitions in the West Bank take place on the spurious legal grounds that Palestinians do not possess building permits,” said Mr. Piper, “but, in Area C, official Israeli figures indicate only 1.5 per cent of Palestinian permit applications are approved in any case. So what legal options are left for a law-abiding Palestinian?”

Meanwhile, UN Secretary-General Ban Ki-moon has noted that the Israeli zoning and planning policy in the West Bank is “restrictive and discriminatory.” Under international humanitarian law, the destruction of property in an occupied territory is also prohibited unless absolutely necessary for military operations.

“International law is clear – Palestinians in the West Bank have the right to adequate housing and the right to receive humanitarian assistance,” said Mr. Piper. “As the occupying power, Israel is obliged to respect these rights.” 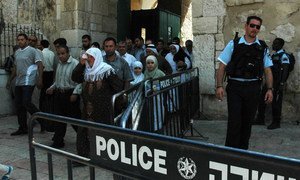 In Israel and the occupied Palestinian territories, 2016 has begun much as 2015 ended — with unacceptable levels of violence and a polarized public discourse. That polarization showed itself in the halls of the United Nations last week when I pointed out a simple truth: History proves that people will always resist occupation.