The top United Nations human rights official announced today he has sought clarifications from the Chinese authorities about the recent arrests of lawyers, and intimidation of Government critics and workers of non-governmental organizations (NGOs), describing these incidents as “a very worrying pattern” that has serious implications for the activities of civil society there.

“Civil society actors, from lawyers and journalists to NGO workers, have the right to carry out their work, and it is the States’ duty to support and protect them,” High Commissioner for Human Rights Zeid Ra’ad Al Hussein said in a statement.

He raised such cases with Chinese officials in Geneva, and acknowledged their efforts to clarify the matters at issue. However, their responses indicate that the authorities “too often reflexively confuse the legitimate role of lawyers and activists with threats to public order and security,” he said.

Police have detained about 250 human rights lawyers, legal assistants, and activists across the country since a nationwide crackdown began last July, although many were subsequently released. Last month, 15 additional human rights lawyers were formally arrested, 10 of them for the crime of ‘subversion of State power,’ which carries a sentence of 15 years to life in prison. Among those facing that particular charge are leading human rights lawyers Li Heping and Wang Yu.

Lawyers should never have to suffer prosecution or any other kind of sanctions or intimidation for discharging their professional duties as they play an essential role in protecting human rights and the rule of law, Mr. Zeid said, urging China to release all immediately and without conditions.

At the same time, he welcomed news of the release of two labour activists detained in Guangdong in December 2015, but noted some of their colleagues remain in detention.

Mr Zeid said he was also concerned by recent cases of disappearances of booksellers from Hong Kong. Five people from Causeway Bay Books – a shop that publishes books critical of the Chinese Government – have gone missing since last October, including Lee Bo, a British national, who, according to the Hong Kong police, told his wife that he was assisting with an investigation. Gui Minhai, a Swedish national, reappeared last month when he was presented on China state television. Gui, who went missing while in Thailand last October, “confessed” to a crime in the city of Ningbo in 2003.

Chinese authorities confirmed this month that the three other booksellers were also being held and investigated for “illegal activities” in China.

The human rights chief urged China to ensure a fair and transparent procedure for these cases.

He also expressed concern about the case of Peter Dahlin, a Swedish citizen and co-founder of the legal-aid NGO “Chinese Urgent Action Working Group.” He was detained in early January and was the first foreigner to be held on charges of “endangering state security.”

Dahlin, who was expelled from China in January, was also presented on state television, where he “confessed” to having breached Chinese law, Mr. Zeid said, stressing that he finds this method of “confession”, extracted during incommunicado detention and publicized on national television, very worrying as it clearly violates the right to fair trial.

As part of a series of new laws governing national security in China, the Government is currently drafting new legislation which, if adopted, may have far-reaching implications for NGOs.

More and more Governments worldwide are using national security measures to restrict the rights to freedom of expression, association and peaceful assembly, and as a tool to target human rights defenders and silence critics, Mr. Zeid noted, emphasizing that security and human rights do not contradict each other, but rather complement and reinforce each other.

At the same time, the human rights chief welcomed the recent enactment of a nation-wide law on domestic violence as an important step in strengthening legal protections for women in accordance with China’s international commitments.

♦ Receive daily updates directly in your inbox - Subscribe here to a topic.
♦ Download the UN News app for your iOS or Android devices.
china|human rights 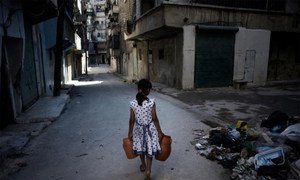