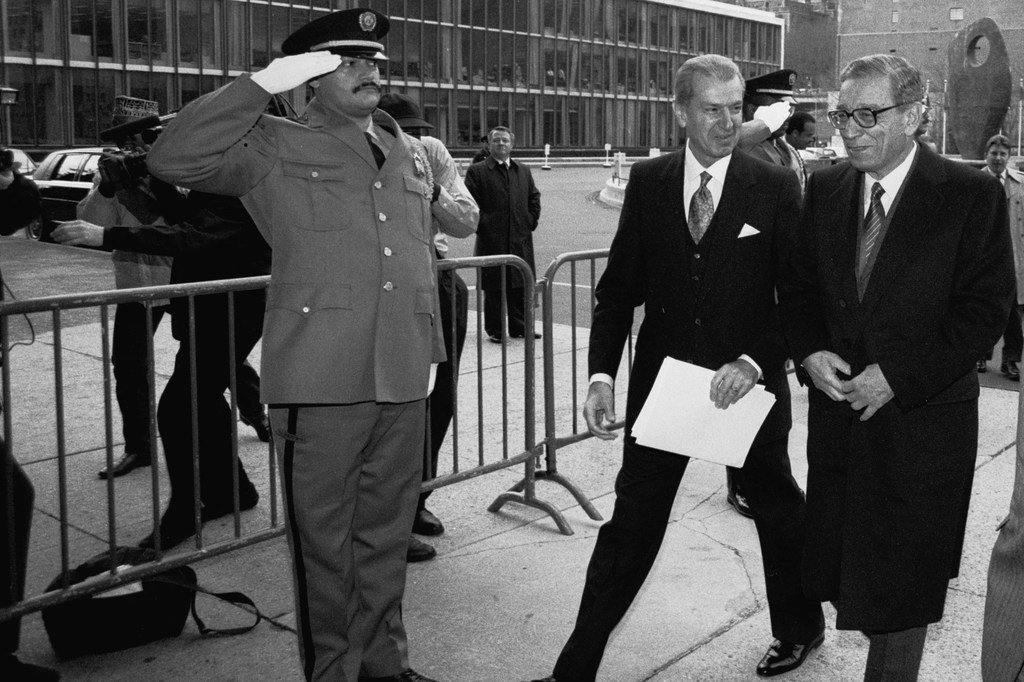 UN Photo/John Isaac
On 2 January 1992, Boutros Boutros-Ghali (right), Secretary-General of the United Nations, arrives at UN Headquarters for his first working day at the United Nations. Aly Teymour, Chief of Protocol, escorts him into the building.
16 February 2016
UN Affairs

Boutros Boutros-Ghali, veteran Egyptian diplomat and the first United Nations Secretary-General from Africa, passed away today at the age of 93. He is being praised for guiding the Organization through the tumultuous early 1990s and for helping shape the UN's response to post-Cold War realities, drafting a seminal report on preventive diplomacy, peacemaking and peacekeeping.

The UN Security Council announced Mr. Boutros-Ghali's death this morning, after which the 15-member body held a moment of silence.

Mr. Boutros-Ghali had a long association with international affairs as a diplomat, jurist, scholar and widely published author. He became a member of the Egyptian Parliament in 1987, and at the time of his appointment as UN chief, he had been Deputy Prime Minister for Foreign Affairs of Egypt since May 1991, and had served as Minister of State for Foreign Affairs from October 1977 until 1991.

In September 1978, Mr. Boutros-Ghali attended the Camp David Summit Conference and had a role in negotiating the Camp David accords between Egypt and Israel, which were signed in 1979.

The sixth United Nations Secretary-General, his term was marked by brutal conflicts in Haiti, Somalia, Rwanda and the former Yugoslavia, among others. Soon after his inauguration, the Security Council met in its first-ever summit of Heads of State. At their request, Boutros-Ghali authored the report called 'An Agenda for Peace,' an analysis on ways to strengthen UN capacity for preventive diplomacy, peacemaking and peacekeeping.

Also during his tenure, he spearheaded UN structural and management reform.

At UN Headquarters in New York, Secretary-General Ban Ki-moon hailed his predecessor as a respected statesman who brought “formidable experience and intellectual power to the task of piloting the United Nations through one of the most tumultuous and challenging periods in its history, and guiding the Organization of the Francophonie in subsequent years.”

“As Secretary-General, he presided over a dramatic rise in UN peacekeeping. He also presided over a time when the world increasingly turned to the United Nations for solutions to its problems, in the immediate aftermath of the cold war,” Mr. Ban told reporters.

“He showed courage in posing difficult questions to the Member States, and rightly insisted on the independence of his office and of the Secretariat as a whole. His commitment to the United Nations – its mission and its staff – was unmistakable, and the mark he has left on the Organization is indelible,” Mr. Ban stressed.

He extended his deepest condolences to Mrs. Boutros-Ghali, as well as to the rest of the family, to the Egyptian people, and to the late Secretary-General's many friends and admirers around the world.

“The United Nations community will mourn a memorable leader who rendered invaluable services to world peace and international order,” he concluded.

The High Representative for the UN Alliance of Civilizations, Nassir Abdulaziz Al-Nasser, expressed his “profound sadness” at Mr. Boutros-Ghali,’s passing and said he will always be remembered for his continuous endeavours to achieve world peace, and noted that ‘Agenda of Peace’ continues to be a lasting legacy. 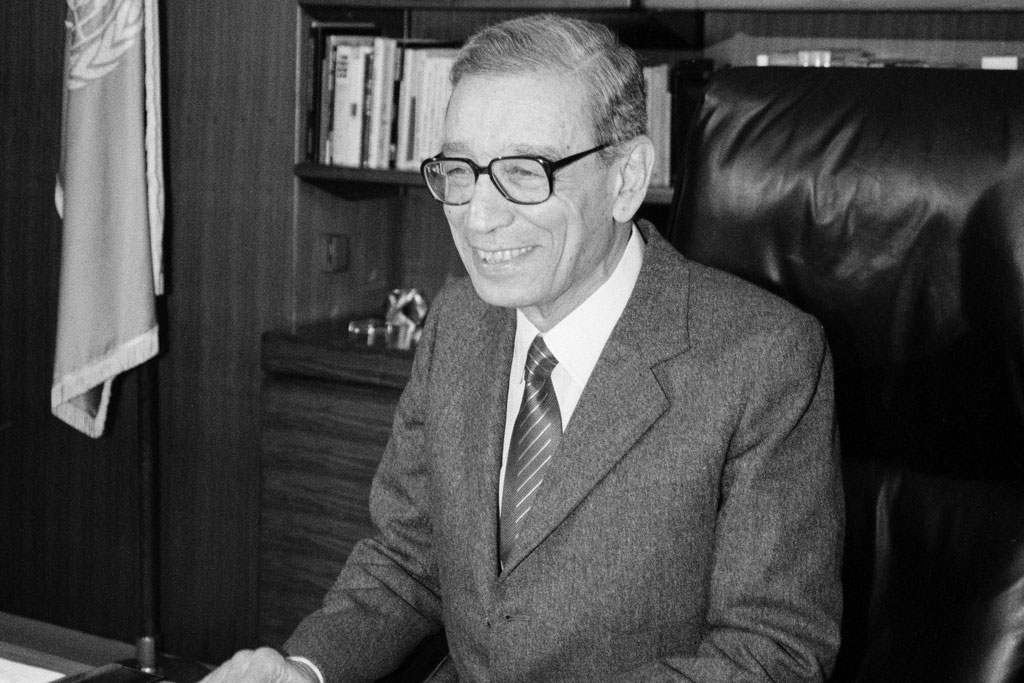 On his first working day in office, 2 January 1992, Secretary-General Boutros Boutros-Ghali is photographed seated at his desk at UN Headquarters in New York. UN Photo/John Isaac 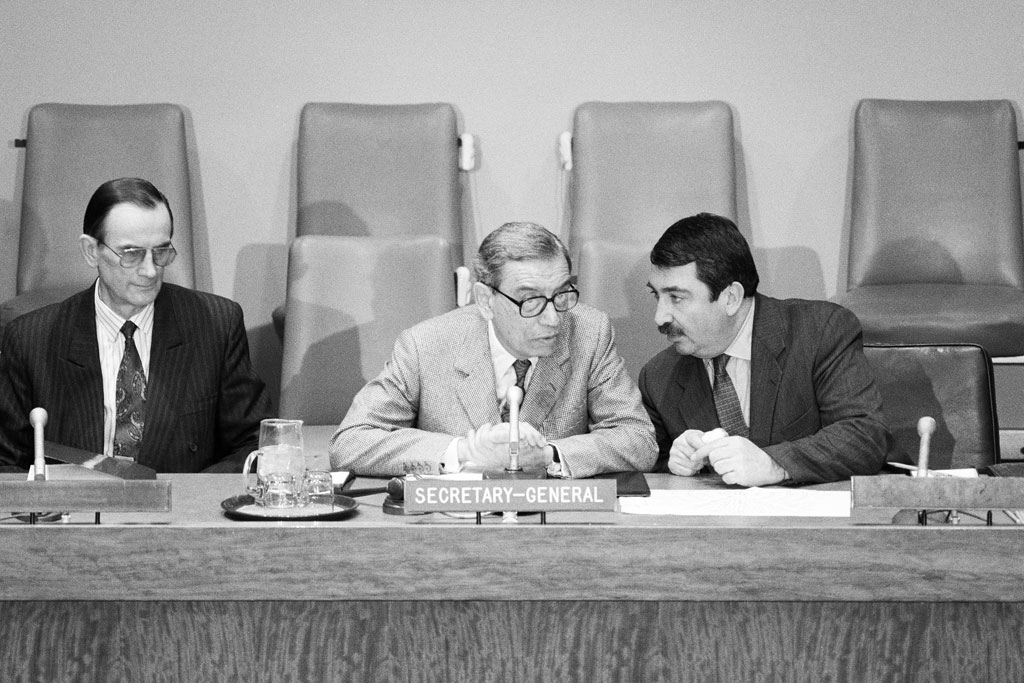 At his first UN press conference, in March 1992, Secretary-General Boutros-Ghali, shown flanked by his Spokesman, François Giuliani (right), and then communications chief Eugeniusz Wyzner, emphasised the relationship between peace and development and the need for cooperation between the UN and regional organizations. He also announced the creation of a task force on peacekeeping, peacemaking and preventive diplomacy. UN Photo/M 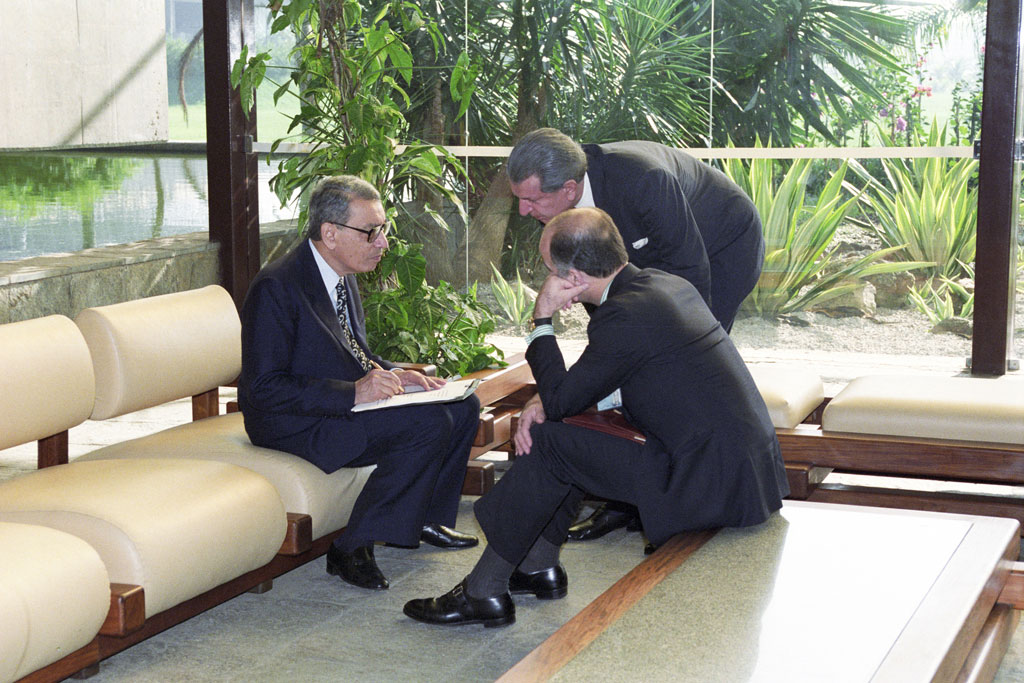 In Rio de Janeiro, Brazil, Boutros-Ghali -- shown conferring with senior aides -- opened the UN Conference on Environment and Development (UNCED), known as the Earth Summit, on 3 June 1992. The Summit adopted the watershed agreement, Agenda 21, then considered to be a blueprint for sustainable development in the 21st century. UN Photo/Michos Tzovaras 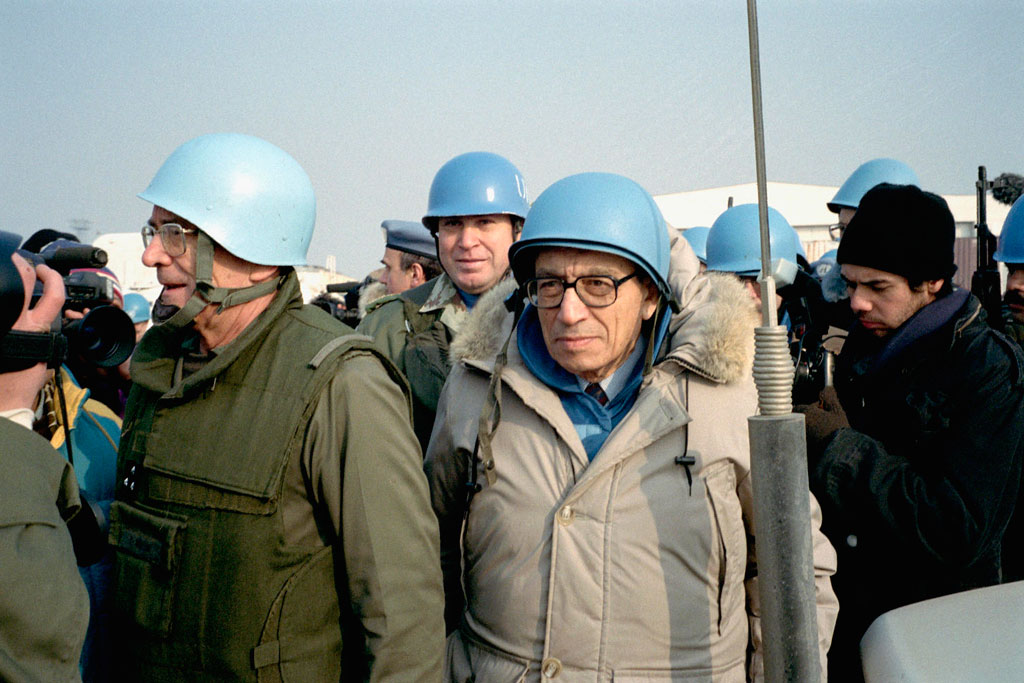 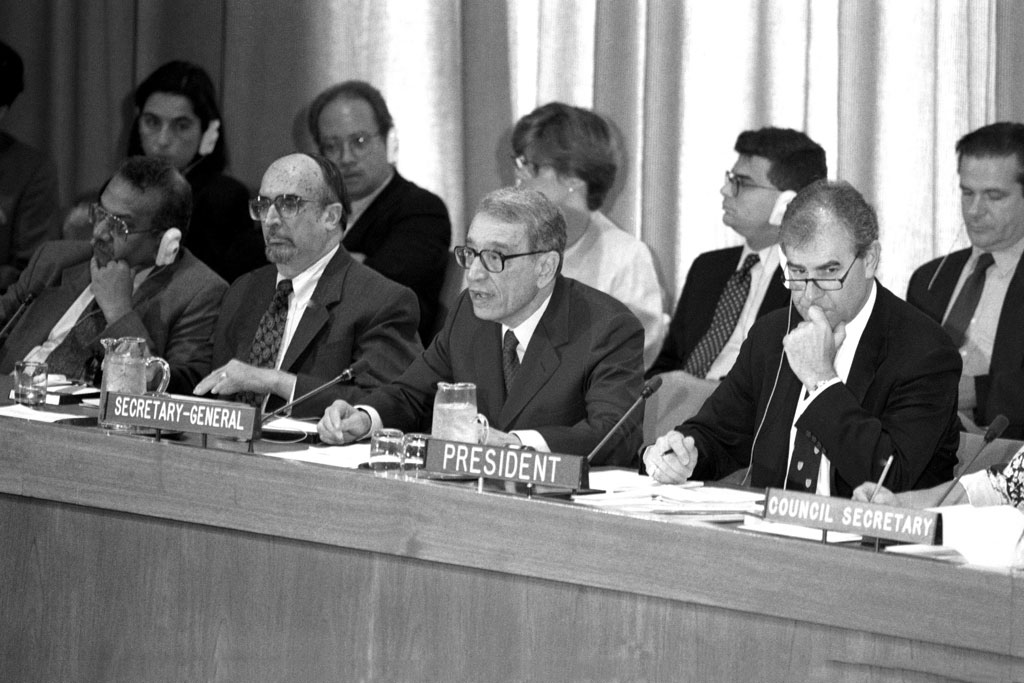 In June 1993, the Economic and Social Council (ECOSOC) discusses a report authored by Secretary-General Boutros-Ghali the previous year, entitled "An Agenda for Peace," which defined peacebuilding as action to solidify peace and avoid relapse into conflict. UN Photo 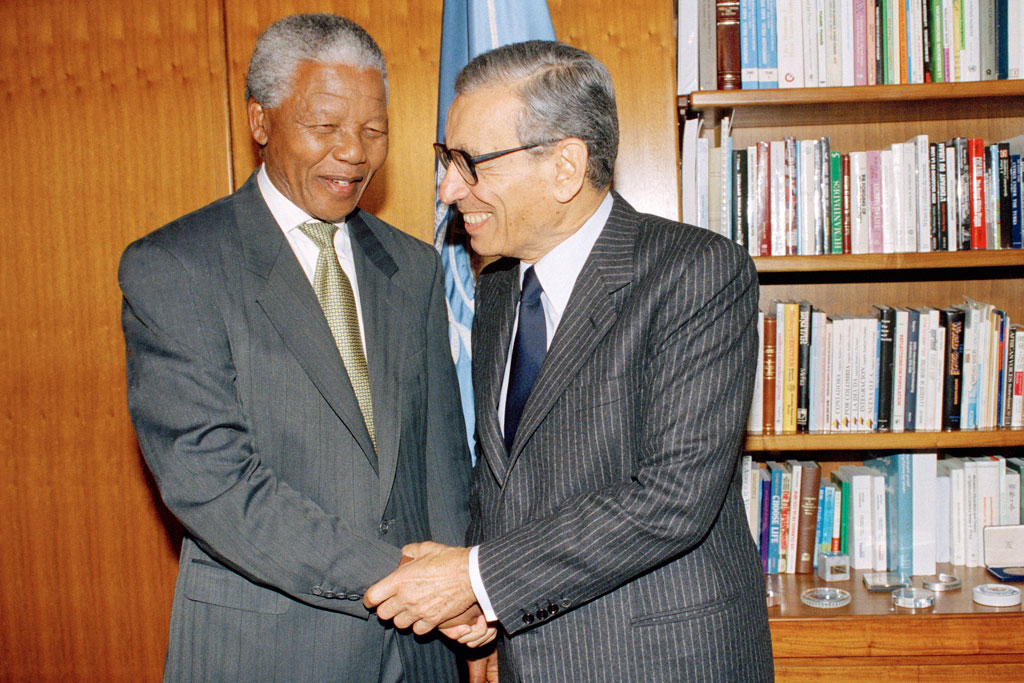 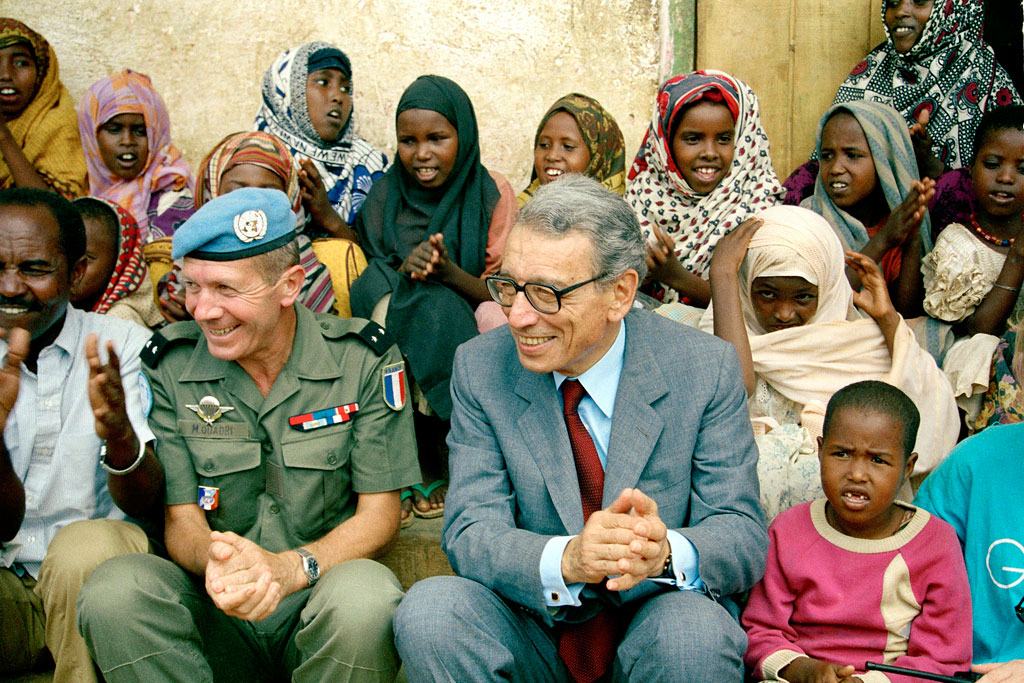 On a visit to Somalia in October 1993, Boutros-Ghali visits with young residents of a UN-supported orphanage in Baidoa, accompanied by Brigadier General Maurice Quadri, Commander of the French contingent of the Second UN Mission in Somalia. UN Photo/Fabrice Ribère 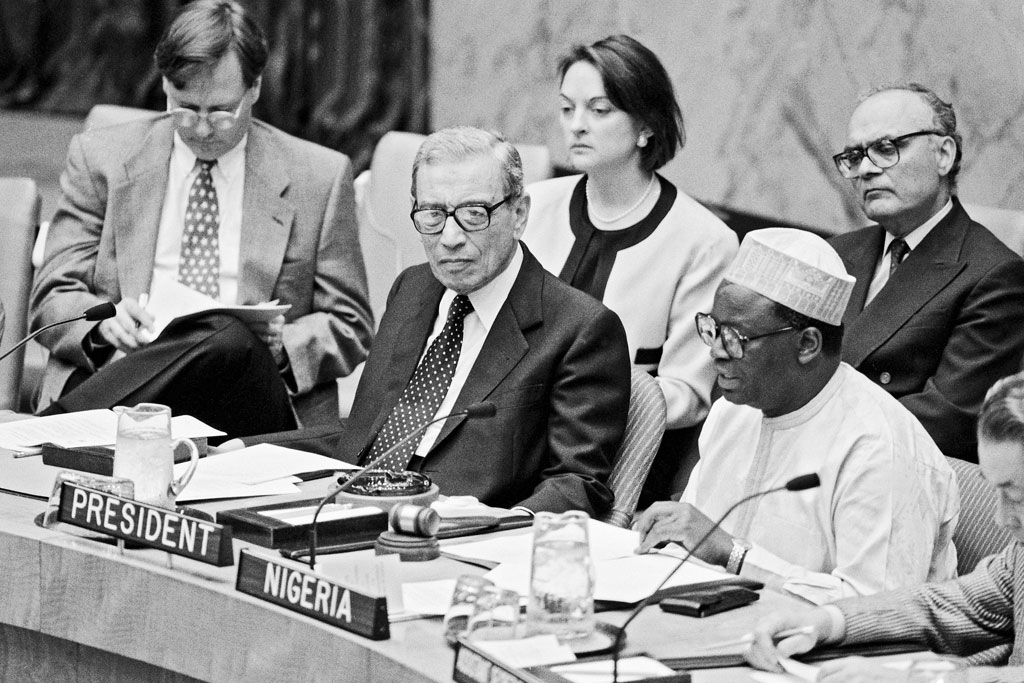 At a meeting of the UN Security Council in May 1994, UN chief Boutros-Ghali looks on as the Council President for that month, Ambassador Ibrahim Gambari of Nigeria (right), issues a statement concerning the inspection of nuclear reactors in the Democratic Peoples' Republic of Korea. UN Photo 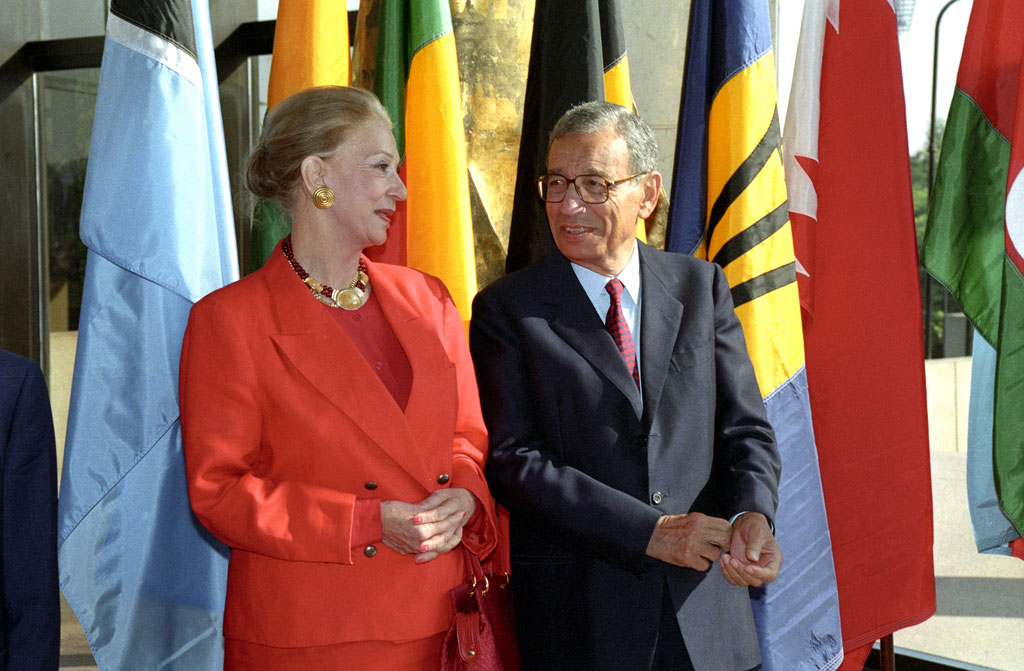 At the start of the landmark International Conference on Population and Development, which took place in Cairo, Egypt, in September 1994, Secretary-General Boutros-Ghali awaits the arrival of delegates to the conference centre, along with his wife, Leia Maria Boutros-Ghali. UN Photo 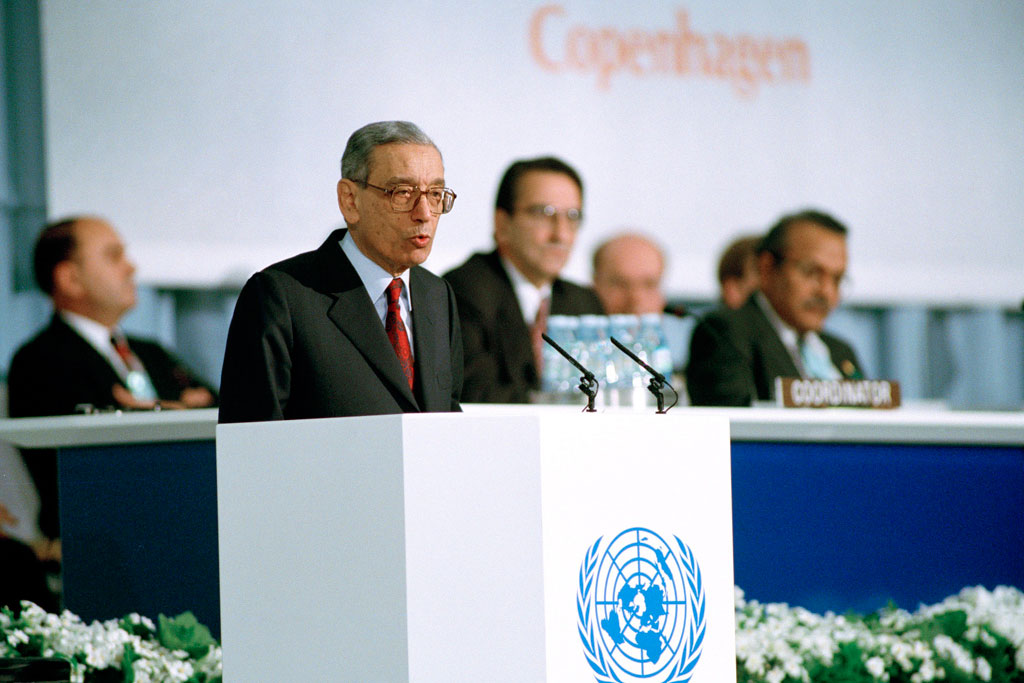 In March 1995, Boutros-Ghali addresses the World Summit for Social Development, which took place in Copenhagen, Denmark. where Governments reached a consensus on the need to put people at the centre of development. UN Photo/J Schytte 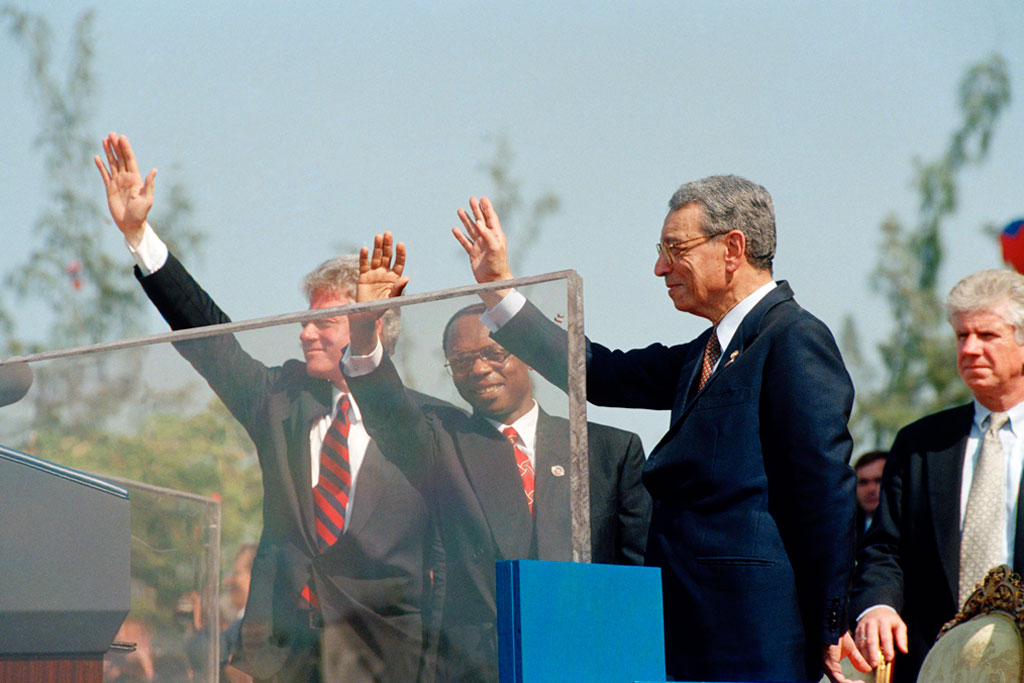 In Port-au-Prince, Haiti, Boutros-Ghali stands with the country's President Jean-Bertrand Aristide (centre) and US President Bill Clinton (left) at a ceremony in March 1995 marking the transfer of command from the Multinational Force to the UN Mission in Haiti (UNMIH). The Mission was charged with assisting the Government in establishing an environment conducive to free and fair elections. UN Photo/Evan Schneider 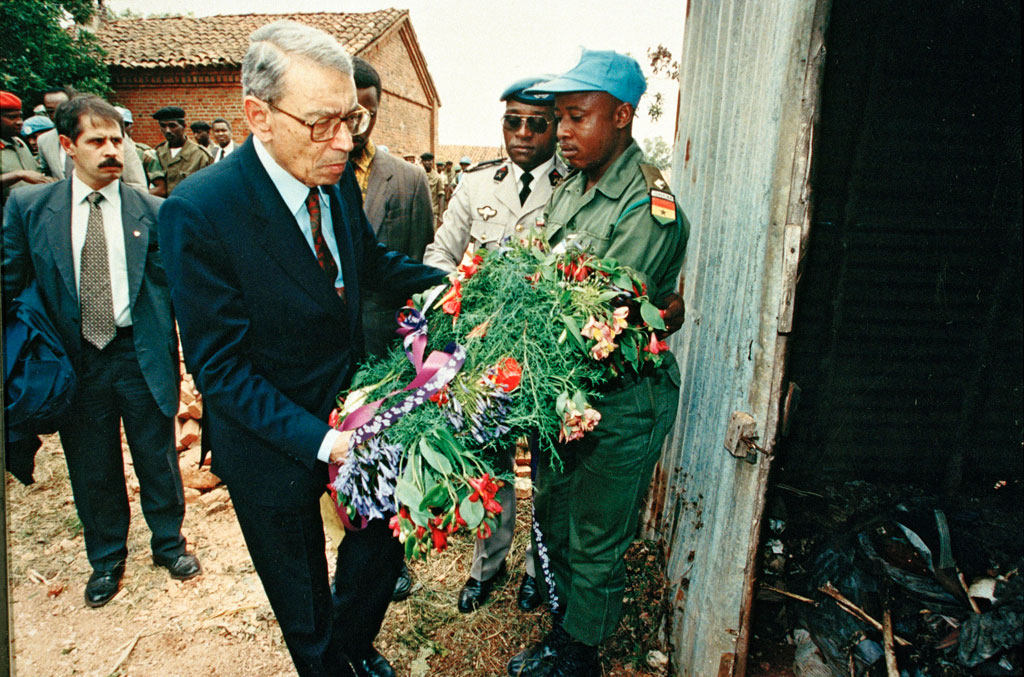 In Rwanda, in 1995, Secretary-General Boutros-Ghali places a wreath near the remains of those killed during a massacre the previous year. In April 1994, systematic waves of political and ethnic killings of Tutsi and moderate Hutus by Hutu-dominated militias erupted after the presidents of Rwanda and Burundi, both Hutus, were killed in a plane crash caused by rocket fire. More than 800,000 were slaughtered. UN Photo/C Dufka 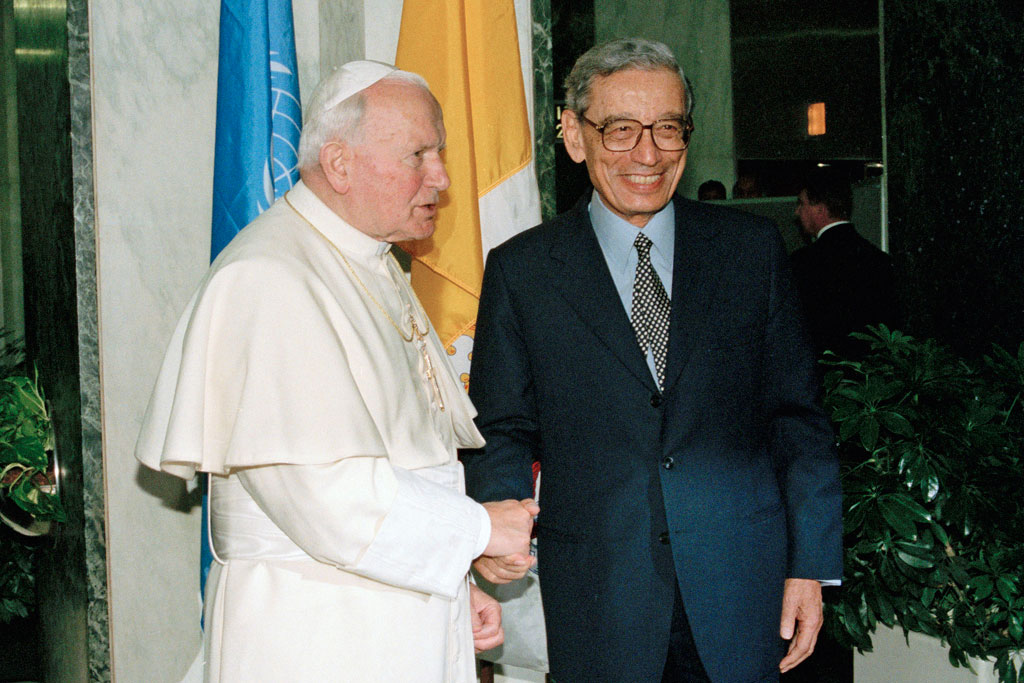 In October 1995, Secretary-General Boutros-Ghali greets Pope John Paul II to UN Headquarters in New York where the Pontiff addressed the General Assembly and UN staff, and spoke to the press and representatives from non-governmental organizations. UN Photo/James Bu 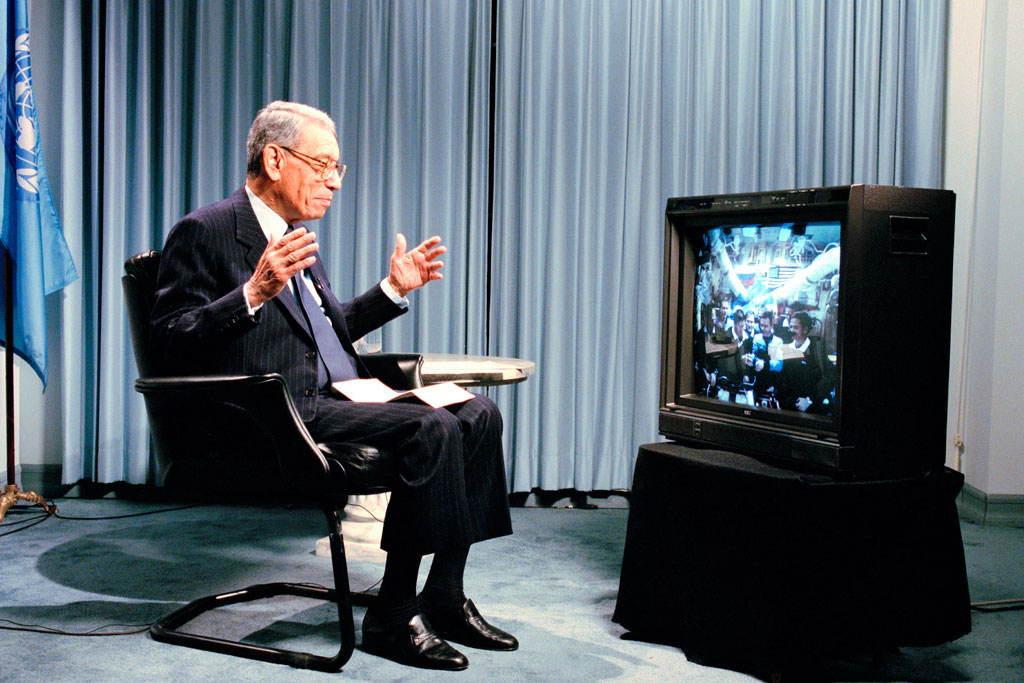 In November 1995, Secretary-General Boutros-Ghali held an interactive video-conference with the combined crew of the second Shuttle-Mir Docking mission, STS-74/Atlantis, whose crew was comprised of representatives from Canada, the Russian Federation, the United States and the European Space Agency (Germany). As a symbol of this international cooperation, UN emblems, including the UN flag, as well as a commemorative parchment scroll of the Outer Space Treaty and the Rescue Agreement, were flown aboard for the first time. UN Photo/Milton Grant 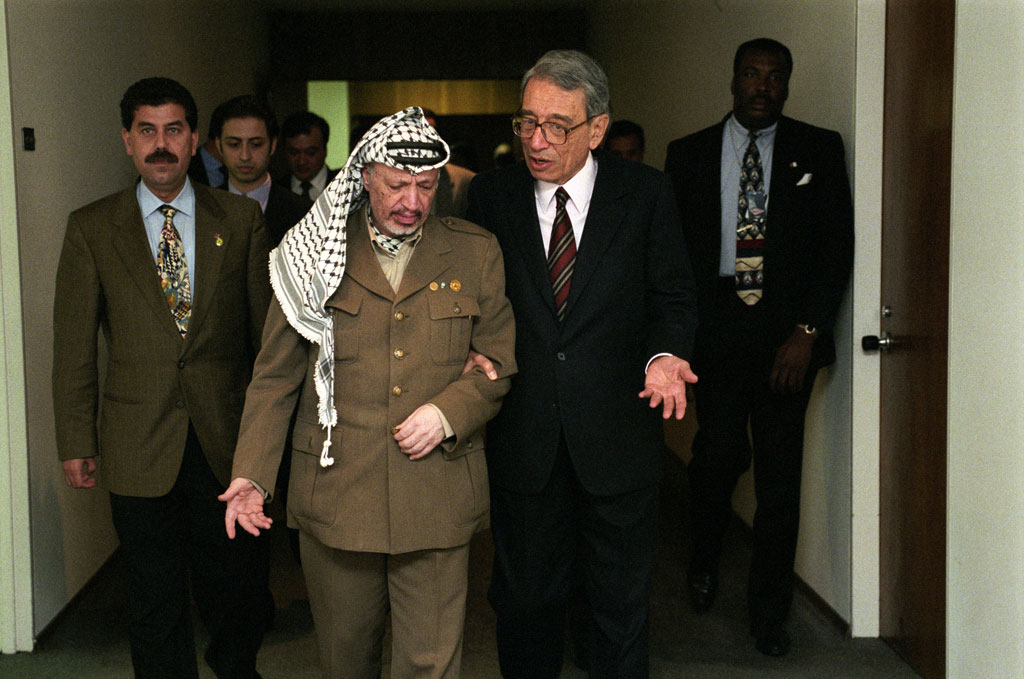 In May 1996, Secretary-General Boutros-Ghali accompanies Yasser Arafat, Chairman of the Executive Committee of the Palestine Liberation Organization (PLO), to his office during the Chairman’s visit to UN Headquarters. UN Photo/Evan Schneider 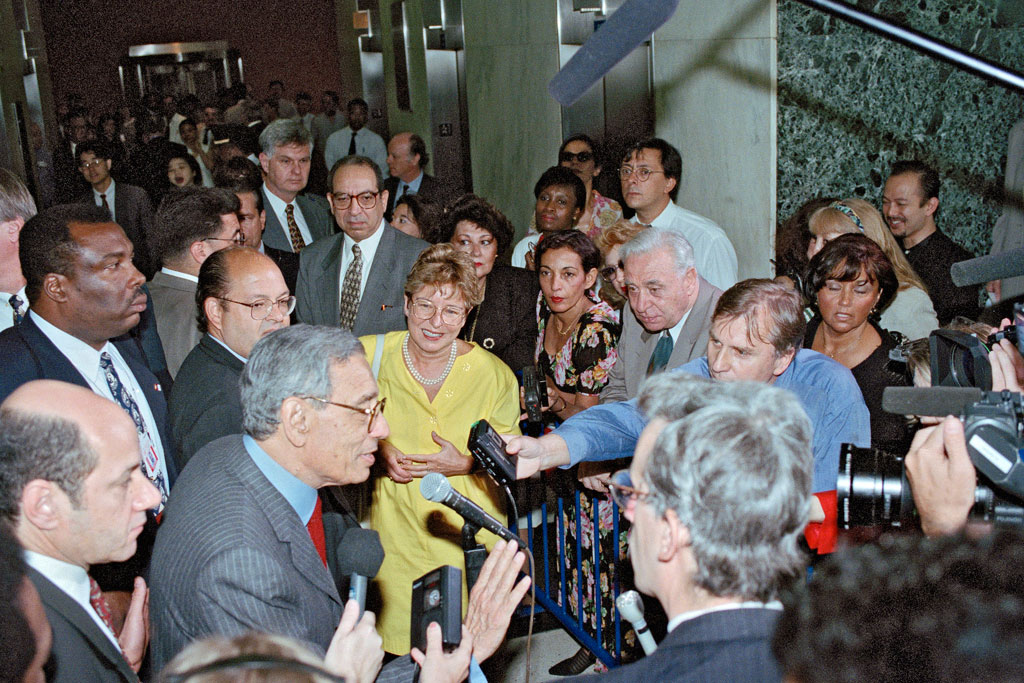 Secretary-General Boutros Boutros-Ghali (second from left) addresses the press on his return to Headquarters following an official trip to Europe and Africa. UN Photo/Milton Grant

♦ Receive daily updates directly in your inbox - Subscribe here to a topic.
♦ Download the UN News app for your iOS or Android devices.
mourn

Edward Mortimer is an ardent believer in the need to change the way in which the Secretary-General of the United Nations is selected, and he is hopeful that this can happen.