Ahead of elections in Central African Republic, UN urges focus on children's needs

UNICEF/UN08040/Le Du
In Banguis PK5 Muslim enclave, a little girl sits in a classroom in Koudougou elementary school. As most schoolteachers are afraid to go into the enclave, the school has not been functioning properly for two years.
12 February 2016

As voters in the Central African Republic (CAR) prepare for the second round of presidential and legislative elections on Sunday, the United Nations Children's Fund (UNICEF) is urging the candidates to make strong commitments to invest in the survival, education and protection of children to ensure lasting peace in the country.

“The only way for the next President of the Central African Republic to break the cycle of violence for good will be to invest in children,” said Mohamed Malick Fall, UNICEF Representative in CAR, in a press release today.

“Children will not vote this Sunday, their voices will not be reflected in the ballots, but the most serious political mistake would be to ignore those who will determine if the future holds a lasting peace in Central African Republic,” he added.

Mr. Fall recalled that in March 2015, a Children's Forum took place in Bangui with UNICEF support. Children from around the country came together to discuss their hopes for the future, with peace and security ranking foremost among their main concerns.

“We are hopeful that the final stage of the electoral process will confirm the country's return to peace,” Mr. Fall said. “Children have paid the highest price in this conflict, and we will need to mobilize all of our energy and resources to ensure that the return of peace enables young people to flourish in the best interests of the country and its development.”

Almost three years into a civil war and sectarian violence, the main childhood indicators in the CAR include an under-five mortality rate that is eighth-highest in the world, according to the UNICEF Representative. In addition, 41 per cent of children under five are chronically malnourished, one third of school-age children do not go to school, and between 6,000 and 10,000 children have been recruited by armed groups during the crisis.

Mr. Fall added that UNICEF has launched an appeal for $55.6 million dollars in 2016 to meet the humanitarian needs for children in the CAR. 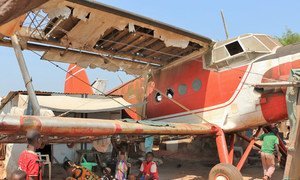 As the Central African Republic (CAR) prepares for the second round of presidential elections this weekend, a new United Nations report detailing violations and human rights abuses in the strife-torn nation's capital late last year has prompted the head of the UN peacekeeping mission there to call for urgent measures in the fight against impunity and to prevent future violations.