FAO/Jon Spaull
A scientist at an FAO-sponsored facility in India culls seeds from a variety of wheat.
11 February 2016

More than ever today, the world needs science and science needs women, the Director-General of the United Nations Educational, Scientific and Cultural Organization (UNESCO) said today, marking the first International Day of Women and Girls in Science.

More than ever today, the world needs science and science needs women, the Director-General of the United Nations Educational, Scientific and Cultural Organization (UNESCO) said today marking the first International Day of Women and Girls in Science.

“UNESCO's message is clear – the new [2030 Agenda for Sustainable Development] will not meet its promise without investing in women's and girls' empowerment through and in science,” Irina Bokova highlighted in a message.

According to the most recent UNESCO Science Report, women account for only 28 per cent of researchers across the world, with the gap deepening at the higher echelons of decision-making. Women also have less access to funding, to networks, to senior positions, which puts them at a further disadvantage in high impact

“This calls for deep and sustained change, starting in the earliest years through improved participation of women and girls in science education, training and research activities at all levels,” Ms. Bokova stressed.

“Girls' and women's access to Science, Technology, Engineering and Mathematics (STEM) cannot be envisaged when girls and women remain the majority of out-of-school children, youth and illiterate adults. This gap throws a shadow over entire societies, as no country can move forward with only half its creativity, energy, and dreams,” she added.

Based on a study conducted in 14 countries, the United Nations estimates that the probability for female students of graduating with a Bachelor's degree, Master's degree and Doctor's degree in science-related field are 18, eight and two per cent respectively, while the percentages of male students are 37, 18 and six per cent.

“Gender equality is a global priority at UNESCO, and promoting women and girls in science stands at the heart of this action, through a range of initiatives,” noted Ms. Bokova, inviting all partners and Governments to redouble efforts to empower girls and women through and in science, as a foundation to take forward the 2030 Agenda. 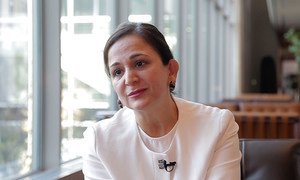 INTERVIEW: UN information technology chief believes all girls should aspire to be ‘geeks’

Atefah “Atti” Riazi, the Chief Information Technology Officer of the United Nations, carries the following items in her handbag at all times – a screwdriver set, a Swiss Army knife and an iPhone.