FAO/Simon Miana
Mosquitoes in a laboratory. Removing stagnant water used by these insects to breed is crucial in combating the spread of Zika.
9 February 2016

Under the lead of the World Health Organization (WHO), the United Nations system, including the UN Food and Agriculture Organization (FAO), is mobilizing a coordinated response to Zika aimed at minimizing the threat in affected countries and reducing the risk of further international spread.

"FAO with its resources and expertise, is ready to do its part in addressing this emergency which continues to evolve," said the agency's Director-General, José Graziano da Silva in a statement issued today.

Zika virus is transmitted to humans primarily by Aedes mosquitoes; a critical measure to combat the spread of the disease is to intensify control of mosquito populations in affected and at-risk areas.

As the leading UN agency on animal health and pest control, FAO highlighted today that it can assist affected nations with targeted interventions while ensuring that people and the environment are not exposed to health and other risks stemming from the inappropriate use of potentially dangerous chemicals.

It also emphasized that it is likely, at least in the short term, that there will be a dramatic increase in the use of insecticides to spray mosquito populations or treat waters, adding that a more immediate and relatively simple set of actions that can be taken to combat the spread of the Zika virus is to ensure the removal of stagnant water used by mosquitos to breed.

“Affected communities need to be encouraged and assisted to ensure that animal drinking water containers are emptied, cleaned and scrubbed weekly. Ponds and other areas where stagnant water collects should also be drained and removed,” advised Mr. Graziano da Silva.

The agency further urged that if the intensive use of insecticides is indeed required, then it is essential that it be done with great care to promote safety for humans and to protect the food chain from contamination. “On this we are in a strong position to provide support to affected countries and regions combating the spread of Zika,” the Director-General stressed.

FAO, in a joint programme with WHO, has developed a set of recommendations on the sound management of insecticides. For example it is important that high quality pesticides are used and mixed according to the manufacturer's instructions, to promote both efficacy and safety.

“FAO's work on agriculture and health threats of animal origin due to climate change, agro-ecosystems and land use policies, early warning of possible disease events, such as what is done with partners on Rift Valley fever – a disease also transmitted by mosquitoes in Africa – can be useful to forecast and ensure countries have their preparedness plans in place in the Americas,” Mr. Graziano da Silva added.

Through its work in monitoring weather patterns, it is possible for FAO to analyze the movements and changing habitats of the Aedes mosquito vectors which can be important in mitigating or preventing the disease.

Mr. Graziano da Silva underscored that the agency's proven record in animal disease control – as it has done with rinderpest, avian influenza or tsetse-borne trypanosomosis – can be beneficial for countries in Latin America and Caribbean to address this problem together.

But besides the use of insecticides, there are reportedly other ways to combat the spread of the Zika virus. One possible longer term solution being highlighted is the Sterile Insect Technique that has been developed at the FAO-IAEA Joint Programme on Nuclear Techniques in Food and Agriculture.

This is a form of pest control that uses ionizing radiation to sterilize male insect pests that are mass-produced in special rearing facilities. It has reportedly been successfully used worldwide for over 50 years for various agricultural insect pests, such as fruit flies, tsetse flies, screw worms and moths. Its deployment against disease-transmitting mosquitoes, such as the carrier of the Zika, Chikungunya and Dengue viruses, is ongoing with some pilots already successfully completed and others showing promising results.

“FAO can contribute to these and other measures. For instance our vast network of workers at field level who for decades have worked with communities and families and have built trusting relationships can bring the right health and safety messages to the people who need them most,” concluded the head of the UN agency.

“The human toll from this emergency is potentially devastating and we must work closely together to ensure it is brought under control," he warned. 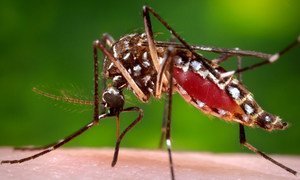 Upholding women’s human rights is essential if the response to the Zika health emergency is to be effective, the United Nations High Commissioner for Human Rights said today, following the advice to women by some governments to delay getting pregnant due to the possible link between the virus and neurological disorders affecting newborns.