World leaders must come together in 2016 to renew their commitments to humanity and unite to prevent and end crisis and reduce vulnerability, United Nations Secretary-General Ban Ki-moon said today, telling UN Member States that the World Humanitarian Summit will provide an opportunity for “concrete steps towards ending the suffering experienced by billions of people today.”

World leaders must come together in 2016 to renew their commitments to humanity and unite to prevent and end crisis and reduce vulnerability, United Nations Secretary-General Ban Ki-moon said today, telling UN Member States that the World Humanitarian Summit will provide an opportunity for "concrete steps towards ending the suffering experienced by billions of people today."

"We need to show the millions of people living in conflict - with chronic needs and constant fear - the solidarity that they deserve and expect," the Secretary-General said at the launch of his report, One Humanity: Shared responsibility, for the first-ever World Humanitarian Summit, set for 23 and 24 May in Istanbul, Turkey.

"The urgency of these challenges and the scale of the suffering mean we must accept our shared responsibilities and act decisively, with compassion and resolve," he added.

Briefing Member States at UN Headquarters in New York this morning, Mr. Ban underscored that the report outlines five core responsibilities for action - an 'Agenda for Humanity' - that all stakeholders should accept and act upon.

Specifically, the report urges leaders to assume their responsibility to prevent and end conflict; calls on States to affirm their responsibility to uphold the norms that safeguard humanity; appeals to States to leave no one behind and reach those who are furthest behind; underscores the responsibility to change people's lives by moving from delivering aid to ending need; and calls for investment in humanity, including enhancing local capacities, reducing risk and building effective and inclusive institutions, especially in fragile contexts.

"Today's complex challenges cross borders and surpass the capacity of any single country or institution to cope," the Secretary-General emphasized. "We need to restore trust in our global world order and in the capacities of our national and regional institutions to confront these challenges effectively," he said.

Mr. Ban also stressed that the upcoming Summit is an opportune moment for world leaders to implement commitments endorsed this past year, including the Sendai Framework for Disaster Risk Reduction, the Addis Ababa Action Agenda, the 2030 Agenda for Sustainable Development, and the recent Paris Agreement on climate change.

"We must ensure no-one in conflict, no-one in chronic poverty, and no-one living with the risk of natural hazards and rising sea levels is left behind," said the UN chief, adding that : "Our aspirations are ambitious, but the urgency of the crises and the needs and expectations of hundreds of millions of people mean we must put this Agenda for Humanity into action."

"At its core, his report is an urgent plea to political and others leaders to summon the courage to reverse the current slide - a slide that is undermining everything this Organization stands for; everything that we as fathers, mothers, sisters and brothers should care for," Mr. Lykketoft said.

Noting that efforts thus far have been "far from adequate," Mr. Lykketoft also stressed that the situation facing some 60 million displaced people and some 125 million people in need of humanitarian assistance continues to demand urgent attention.

"Istanbul is our first major opportunity since the 2030 Agenda was agreed to give true meaning to the principle of leaving no one behind and to devise more credible, equitable and sustainable responses to global humanitarian crises," he said.

♦ Receive daily updates directly in your inbox - Subscribe here to a topic.
♦ Download the UN News app for your iOS or Android devices.
World Humanitarian 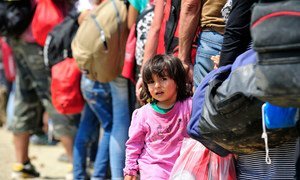