Given the ability of the Islamic State of Iraq and the Levant (ISIL) to adapt quickly to new circumstances and the steady stream of foreign fighters joining the group's ranks, United Nations Member States must mount a strategic response that includes addressing the underlying political and socio-economic causes of conflicts, particularly in Syria and Libya, the top UN political official told the Security Council today.

Jeffrey Feltman, the Under-Secretary-General for Political Affairs, also urged strengthening the operational and legal framework needed to choke off ISIL's funding, in the first-ever briefing to the Council on UN counter-terrorism efforts against ISIL and its affiliates. The meeting follows a December 2015 Council session of world Finance Ministers that requested a “strategic level” report from Secretary-General Ban Ki-moon in the issue.

“Despite global efforts to counter through military, financial and law enforcement measures, and the substantial losses inflicted upon ISIL, the group continues to pose one of the major challenges of our time to international peace and security,” Mr. Feltman told the Council.

Highlighting some of the report's key findings, he explained that ISIL's emergence has been facilitated by the protracted conflicts and instability in Iraq and Syria, as well as the weakening of State institutions and the inability of the States to exercise effective control over territory and borders. The group, also known as Da'esh, which has benefited from a flow of financial resources and its ties with transnational organized criminals, is expanding its operations to other regions.

“In the face of this common threat, I would like to echo the Secretary-General's call to unity and action, including in finding political solutions to the conflicts in Syria and Libya, and assure you that the United Nations is committed to supporting Member States' efforts,” said Mr. Feltman.

Describing ISIL's global expansion strategy, he said its operations across West and North Africa, the Middle East and South and South-east Asia, as well as the increasing number of terrorist groups pledging allegiance to its cause and the substantial flow of foreign terrorist fighters from around the world, are a source of major concern.

He went on to note that ISIL continued to perpetuate appalling human rights abuses against populations under its control, including mass executions, widespread torture, amputations, ethno-sectarian attacks, sexual violence, enslavement and systematic recruitment and abuse of children.

The report further analyzes ISIL's finances, highlighting the group's capacity to mobilize vast resources rapidly and effectively, he said. Its main sources of financing include the exploitation of oil and other natural resources, “taxing,” confiscation and the looting of archaeological sites, as well as external donations and use of the Internet and social media to raise funds.

Noting that ISIL's attraction for potential recruits continues unabated, he said an estimated 30,000 foreign terrorist fighters are actively engaged with it and associated groups. ISIL sympathizers, acting alone or in small cells, had effectively expanded the geographical scope and complexity of their attacks in the second half of 2015, as had been seen in the attacks carried out in Paris, Beirut and Jakarta.

While the report stresses that primary responsibility for countering the threat of ISIL lay with Member States, the UN and other international organizations have a critical role to play in supporting their efforts and had already undertaken a number of measures in that regard. In the context of countering the financing of terrorism, Member States should ensure the timely exchange of information and financial intelligence, implement relevant Security Council resolutions, and strengthen their collaboration with private sector actors to address the threat.

“The United Nations should support these efforts in a more comprehensive way, particularly in its field operations, including by enhancing its research on the nexus between ISIL and transnational organized crime, and stepping up technical assistance to build Member States' capacities,” he added.

In the third part of the report, he said, the Secretary-General provided a number of strategic responses for Member States and the United Nations in addressing the ISIL threat. They included examining the underlying political and socio-economic causes of relevant conflicts, particularly in Syria, and strengthening the operational and legal framework needed to choke off ISIL's funding.

Among other recommendations listed in the report, he said, were those relating to countering the financing of terrorism and recruitment while addressing violent extremism and radicalization, including through preventive efforts focused on education and youth. Member States should criminalize travel by foreign terrorist fighters, in accordance with relevant resolutions, and take measures to strengthen border-management regimes. 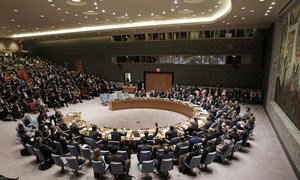