“Virtually everyone agrees there has been progress, although opinions differ markedly about the extent of that progress,” UN High Commissioner for Human Rights Zeid Ra'ad Al Hussein said in a statement to the press, issued from Colombo.

During his four-day visit, Mr. Zeid met with several senior Government officials, including President Maithripala Sirisena and Prime Minister Ranil Wickremesinghe. In Colombo, he visited the Human Rights Commission of Sri Lanka and the Task Force that will lead the forthcoming National Consultations on transitional justice. On Sunday, he was in the Northern and Eastern Provinces of the country.

“This has been a much more friendly, cooperative and encouraging visit than the one my predecessor endured in August 2013, which as you may recall was marred by vituperative attacks on her integrity, simply because she addressed a number of burning human rights issues that any High Commissioner for Human Rights would have raised at that time,” said Mr. Zeid, referring to former UN rights chief Navi Pillay.

“I am aware that some of the same people have given me a similar welcome – I've seen the posters – but I am pleased that in the new environment in Sri Lanka, all voices, including the moderate voices of civil society, can at last be heard, even if sometimes the voices of hatred and bigotry are still shouting the loudest, and as a result are perhaps being listened to more than they deserve,” he added.

Noting that Sri Lanka has come a long way in the past year with the media now having greater freedom, Mr. Zeid said the element of fear has considerably diminished, at least in Colombo and the South, but in the North and the East, “it has mutated but, sadly, still exists.”

On the positive side, he highlighted several recent “highly symbolic steps” taken that have had a positive impact on inter-communal relations, including the decision to sing the national anthem in both Sinhala and Tamil on Independence Day, for the first time since the early 1950s. He also indicated that one of the most important long-term achievements over the past year has been the restoration of the legitimacy and independence of Sri Lanka's Human Rights Commission.

But despite these advances, he said Sri Lanka is still in the early stages of renewal. “Repairing the damage done by a protracted conflict is a task of enormous complexity, and the early years are crucial. If mistakes are made, or significant problems are downplayed or ignored during the first few years, they become progressively harder to sort out as time goes on,” he warned. “While the glass is still molten, if you are quick and skilful, you can shape it into a fine object that will last for years.”

Turning to the proposed Constitutional reform, which should ensure that the rights of all Sri Lankans are fully recognised, Mr. Zeid said there are fears that at a later stage this may be achieved “at the expense of other equally important processes such as truth-telling, justice and accountability.”

“While the Task Force appointed to lead the National Consultation process includes high quality representatives of civil society, there are concerns – including among the Task Force members themselves – that the process is too rushed and has not been properly planned or adequately resourced,” he noted, highlighting measures that could be taken quickly to reverse this “trend of draining confidence.”

Meanwhile, he said issues relating to implementation of a resolution adopted by the UN Human Rights Council last October were high on his agenda during this trip. Co-sponsored by Sri Lanka and agreed with the consensus of all 47 Council members, it laid out an “eminently sensible pathway for the country to follow,” with the Office of the High Commissioner for Human Rights (OHCHR) charged with following up on its implementation.

“The Human Rights Council resolution was in many ways a reflection of the reform agenda that Sri Lankans had voted for in last year's Presidential and Parliamentary elections. It sets out some of the tough steps that must be taken to achieve reconciliation and accountability and, through them, lasting peace,” Mr. Zeid stressed.

“There are many myths and misconceptions about the resolution, and what it means for Sri Lanka. It is not a gratuitous attempt to interfere with or undermine the country's sovereignty or independence. It is not some quasi-colonial act by some nebulous foreign power. The acceptance of the resolution was a moment of strength, not weakness, by Sri Lanka” he insisted, adding that it was the country's commitment to both itself and to the world to confront the past honestly and, by doing that, take out comprehensive insurance against any future devastating outbreak of inter communal tensions and conflict.

“I urge all Sri Lankans to make an effort to understand what that resolution and the report underpinning it actually say, and I urge all those in a position to do so, to make a greater effort to explain why the recommendations are so important, and why the United Nations and all those individual States – Sri Lanka included – endorsed them,” he continued.

The human rights chief told reporters the resolution suggests international participation in the accountability mechanisms set up to deal with international crimes and gross human rights violations committed by individuals on both sides.

“This is a practical proposal to solve the very real and practical problems I mentioned earlier. But it is only one aspect – albeit a very important one– of the broad range of measures outlined in the 2015 UN report and resolution, and the extent to which it has been allowed to dominate the debate in Sri Lanka in recent days is unfortunate,” he said.

Concluding his remarks, Mr. Zeid said the international community wants to welcome Sri Lanka back into its fold without any lingering reservations and help Sri Lanka become an economic powerhouse. 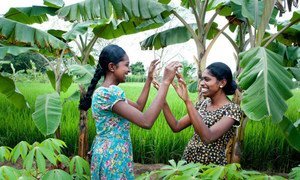 United Nations Secretary-General Ban Ki-moon today congratulated the President of Sri Lanka, the Government and its citizens on the first year of the country's political transition.