OSCE/Thomas Rymer
Member of a polling station committee for Belarus' presidential election empty a ballot box prior to counting in Minsk, 11 October 2015.
9 February 2016

The United Nations-appointed monitor of the human rights situation in Belarus warned today that opposition leaders, activists, journalists, and many other citizens have been subjected to harassment, administrative procedures and fines since the country's October presidential election.

“During the last four months, no changes have been initiated in Belarus to alter the oppressive laws and practices, while numerous cases of new violations of basic rights have emerged,” UN Special Rapporteur Miklós Haraszti said in a news release, which described the presidential poll as “falling short of democratic standards,” just as all votes in that country since the 1990s.

The incumbent was reappointed following an unverifiable turnout and non-transparent ballot count, he added.

“Unfortunately, the dismal state of human rights has remained unchanged in the country,” said Mr. Haraszti, who was designated as Special Rapporteur by the Geneva-based UN Human Rights Council in 2012.

He said that the authorities have neither ceased the systematic harassment of those who attempted to practice their individual, civil, political, and other rights, nor shown any willingness to reform the entrenched, highly oppressive legal system.

The independent expert, however, commended that political prisoners had been released on the eve of the election, noting that it indicated a good start as the authorities, unlike during the 2010 election, refrained from violence against political opponents, and they did not arrest the rival candidates.

Yet, the Government has not restored the civil political rights of the released political prisoners, the rapparteur said, pointing out that the politically construed criminal cases against the 2010 presidential candidate Ales Mikhalevich and journalist Aliaksandr Alesin continue, just as the imprisonment of cultural activist Mikhail Zhamchuzhny.

Belarusian human rights activist Alena Tankachova has been banned from entry into his homeland, and no safe re-entry has been granted for those forced to leave the country due to political persecution, Mr. Haraszti said, adding that registration of human rights organizations 'For Fair Elections', Viasna, and others has been repeatedly rejected on “flimsy” administrative reasons.

Ceasing all these arbitrary persecutions would only take political will in this highly centralized system, and the Government should engage in a broad reform to bring legislation in compliance with its international human rights obligations, he stressed.

The rapporteur highlighted that Belarus has for 20 years been the only country in Europe where there is no opposition in parliament. The forthcoming parliamentary elections in 2016 will also be an opportunity for the authorities to attest of their commitment to reform, he said.

Moldova: UN calls on citizens, authorities to act with restraint amid election protests 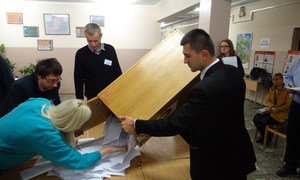 The United Nations Special Rapporteur on human rights in Belarus, Miklós Haraszti, today said that while the Presidential polls conducted in the country this past Sunday were not met with violence as in previous cases, no progress was made in serving the Belarusians’ right to free and fair election.