UNICEF/UNI43567/LeMoyne
A family digs up pieces of wood on the outskirts of Gonaives, Haiti, which they burn in a pit to create charcoal for sale at the local markets. This demand, coupled with the lack of alternative employment, has contributed to the deforestation and erosion crisis in the country.
9 February 2016

Some 3.6 million Haitians are facing food insecurity, among them more than 1.5 million people who are severely food insecure. This is a key finding from an emergency food security assessment conducted by WFP, the UN Food and Agriculture Organization (FAO) and National Food Security Coordination.

“Without rain for the 2016 spring season, farmers will lose their fourth consecutive harvest on which they normally depend to feed their families,” warned Wendy Bigham, WFP's Deputy Country Director in Haiti, in a news release.

“We need to help them meet their immediate needs and help build up their resilience,” she added.

According to the agency, the main harvest in 2015 fell below average, with losses of up to 70 per cent in some areas. This is severely threatening food security in Haiti, where agriculture employs half of the working population and 75 per cent of people live on less than $2 per day.

In addition, the current El Niño phenomenon, which began in early 2015, is one of the strongest on record and is affecting the food security of vulnerable people around the globe, including in Haiti.

In some areas of the country, up to 70 per cent of the population is facing hunger and a recent study conducted by the UN Children's Fund (UNICEF) and the Government of Haiti revealed that malnutrition rates are above emergency levels in several communes.

WFP intends to scale up its food assistance programmes to address the most critical and immediate needs of one million drought-affected people by distributing cash and food rations. The agency also plans to complement the immediate distributions with Cash-for-Assets programmes, in which 200,000 Haitians are paid in cash in exchange for work on watershed management and soil conservation projects to improve local infrastructure for long-term development.

In coordination with the Government, WFP has been distributing food to about 120,000 Haitians since November in areas worst affected by the drought. A two-month food ration feeds a family of five and includes such basic food items as rice, pulses, oil, sugar and salt.

WFP said its assistance to families is essential until at least the next harvest, expected in July. To meet the basic needs of 1 million Haitians, the agency, which is funded entirely by voluntary contributions, requires $84 million. 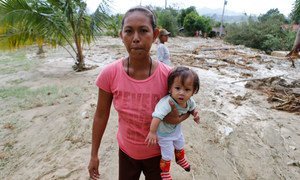