The United Nations emergency relief chief today called on the Syrian Government and other parties to honour their duty to protect civilians and allow safe access for aid as tens of thousands of people were reported to have been displaced from Aleppo and elsewhere in the war-torn country's north by heavy Government bombardment.

“I am gravely concerned by reports that over 30,000 civilians have been displaced from Aleppo City and other areas in northern Syria over the past week by heavy clashes and aerial bombardment by the Government of Syria, allied forces and armed groups,” UN Under-Secretary-General for Humanitarian Affairs and Emergency Relief Coordinator Stephen O'Brien statement.

“About 80 per cent of them are estimated to be women and children. We have reports that civilians have been killed and injured, and that civilian infrastructure, including at least two hospitals, has been hit,” he noted.

He also voiced extreme concern for people in other parts of the country, including in Dar'a governorate in the south, where intensified fighting has displaced thousands of people, killing or injuring civilians.

While some people are able to stay with host families or relatives, displacement camps in the areas close to the border with Turkey are already full and running above capacity, with people urgently requiring shelter, food and basic household items.

“I call on the warring parties to immediately halt all actions that might result in civilian loss of life and damage, to permit civilians to move to safer areas and to refrain from targeting medical and other civilian infrastructure,” he continued.

The UN and its humanitarian partners are working to quickly scale up their response and stocks, providing displaced families with food or cash and vouchers where feasible, as well as deploying mobile clinics, supplying health facilities and increasing water and sanitation services for new arrivals at the camps near Bab al Salameh border crossing.

The agencies are also working to bring water treatment and nutrition supplies to Aleppo City as well as school-in-a-box kits for Azaz and other areas of north Aleppo governorate. 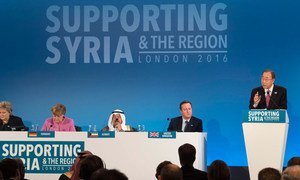