Visiting Park East Synagogue in New York City to honour the memory of the victims of the Holocaust, United Nations Secretary-General Ban Ki-moon today called on people to work together “to build bridges and end anti-Semitism, bigotry against Muslims, and all other forms of hatred.”

“The world faces a crisis of protection,” Mr. Ban told members of the congregation. “That is why it is so important that we never forget the lessons of the Holocaust.”

The UN chief said the testimonies of Holocaust survivors remind the world what happens when inhumanity prevails but also serve as a reminder “of the power of the human spirit and the inherent dignity and worth of every person.”

This year, the United Nations and its partners organized more than 120 Holocaust remembrance events in 36 countries, with a focus on “the Holocaust and Human Dignity” in the context of the International Day of Commemoration in Memory of the Victims of the Holocaust.

Mr. Ban stressed that new conflicts and genocide can only be prevented by “breaking down the walls of intolerance and division.”

“The Holocaust was a colossal crime. Six million Jews were systematically rounded up and murdered. Millions of others were killed alongside them – prisoners of war, political dissidents, members of minority groups, such as Roma and Sinti, homosexuals and persons with disabilities,” he recalled, adding that the evidence is irrefutable, and those who deny it only perpetuate falsehoods and make a mockery of the pain.

“We must ask ourselves why and how this could happen and together work to prevent such atrocities from happening again,” the Secretary-General stressed, noting that he has been reminded of this “stark truth” many times, visiting a genocide memorial in Rwanda, the site of the massacre at Srebrenica in Bosnia Herzogovina, and the Tuol Sleng prison in Cambodia.

“Today, I am deeply disturbed by the massacres in South Sudan, by the continued carnage in Syria, and by the atrocities being inflicted by Daesh and Boko Haram,” he stated. “In today's climate of growing of global fear and alienation, we must not lose sight of the fundamental truth that all humans are born with inalienable rights, dignity and worth.

“The memory of the Holocaust guides us by reminding us what can happen when we stop seeing our common humanity,” he concluded. “Only by remembering the past can we hope to shape a better future.” 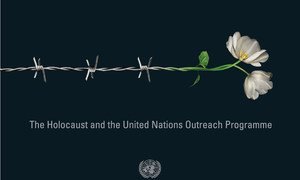 Remembering Holocaust, Ban urges all to denounce ideologies that pit people against each other

Marking the International Day of Commemoration in Memory of the Victims of the Holocaust, United Nations Secretary-General Ban Ki-moon today urged everyone to denounce political and religious ideologies that set people against people.