“Never has the international community raised so much money on a single day for a single crisis,” he told a news briefing at the end of the day-long conference, co-hosted by the UN and the Governments of the United Kingdom, Kuwait, Germany and Norway.

More than half of the pledged amount is earmarked to meet immediate needs in 2016 in a country where nearly five years of war has killed over 250,000 people, sent over 4 million fleeing Syria, displaced 6.5 million internally, and put 13.5 million people inside the country in urgent need of humanitarian aid.

“Today’s pledges will enable humanitarian workers to continue reaching millions of people with life-saving aid,” Mr. Ban said. “The promises of long-term funding and loans mean that humanitarian and development partners will be able to work together to get children back into school, design employment programmes and begin rebuilding infrastructure.

The commitment of countries hosting large numbers of refugees to open up their labour markets is a breakthrough, he added, thanking the Governments of Jordan, Lebanon and Turkey “for choosing solidarity over fear.”

He hailed the commitment to get 1.7 million children in Jordan, Lebanon and Turkey into school, and to increase access to learning opportunities for children inside Syria.

“Perhaps most important, I welcome the shared commitment of today’s attendees to use their influence to end sieges and other grave human rights abuses,” he said. “What will most help the people of Syria is not just food for today, but hope for tomorrow. Yet the parties to the conflict remain deeply divided – even on improving the humanitarian situation.” 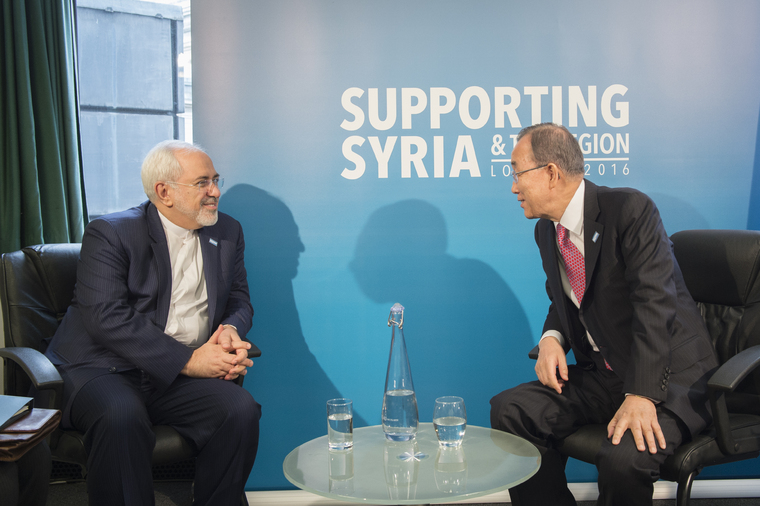 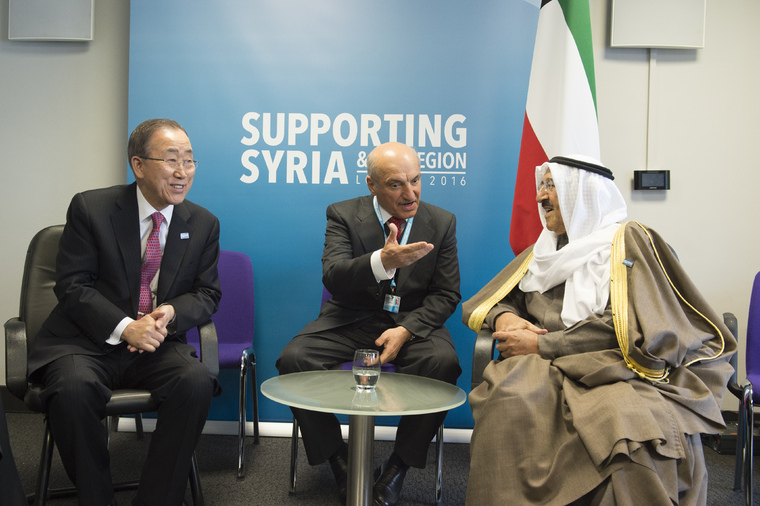 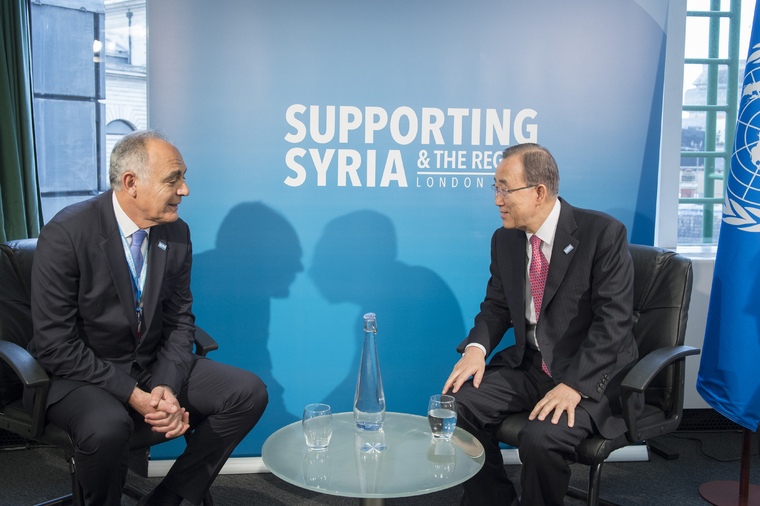 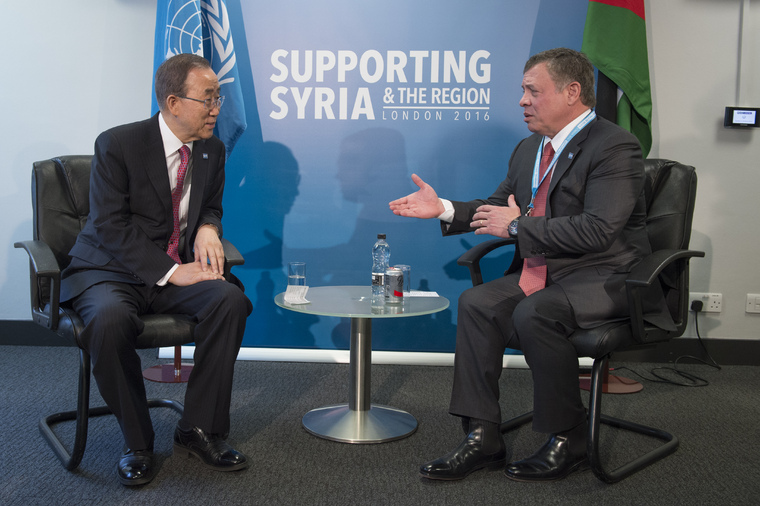 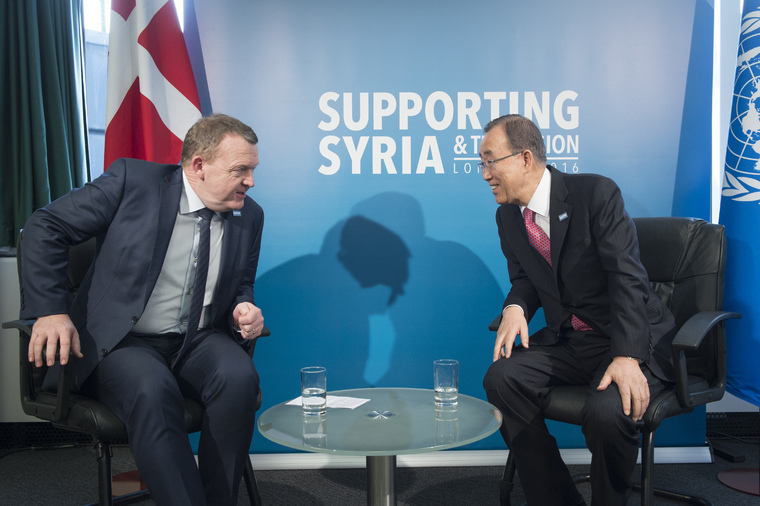 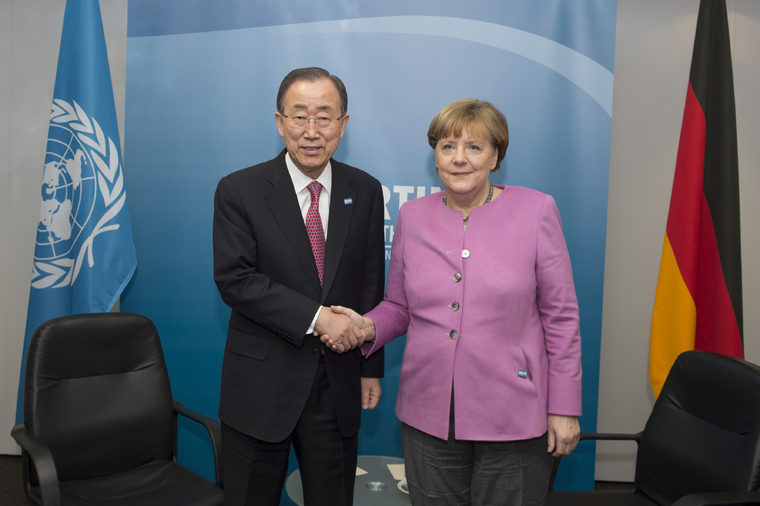 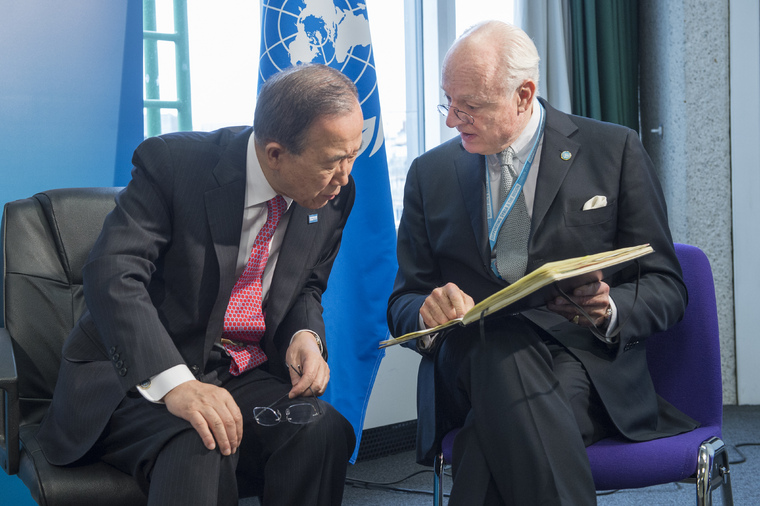 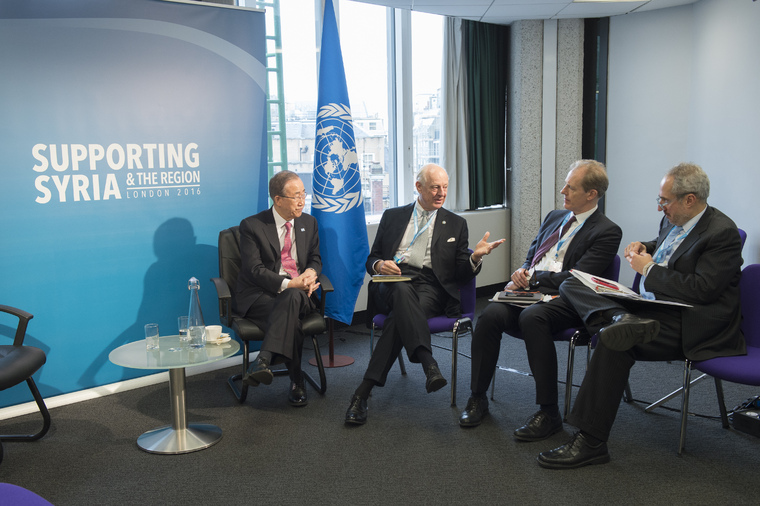 In his opening speech to the conference Mr. Ban blamed lack of humanitarian access to besieged civilians and increased air raids and military activities for undermining UN-brokered peace talks in Geneva, and he called on world powers to press the parties to engage seriously in the negotiations, now scheduled to resume on 25 February.

The talks between the Government and opposition, which are not face-to-face but indirect, involving 'close proximity diplomacy' with UN mediators shuttling between the sides in different rooms, were suspended by UN Special Envoy for Syria Staffan de Mistura yesterday just two days after he declared their official start.

“It is deeply disturbing that the initial steps of the talks have been undermined by the continuous lack of sufficient humanitarian access, and by a sudden increase of aerial bombings and military activities within Syria,” Mr. Ban said. “The focus on the people of Syria is also being lost amid petty procedural matters.

“I agree fully with my Special Envoy that we should not have talks for the sake of talks. The coming days should be used to get back to the table, not to secure more gains on the battlefield,” he added, calling on the UN Security Council and the International Support Group for Syria (ISSG) to press the parties to engage seriously.

The ISSG - the International Syria Support Group comprising the Arab League, the European Union, the United Nations, and 17 countries including the United States and Russia – laid the groundwork for the Geneva talks at a meeting in November.

Laying out three objectives for today's meeting, Mr. Ban mentioned first the obligation to meet the enormous humanitarian needs – at least $7 billion for this year alone, twice as much as last year. “Despite the generosity of some donors, the international community has failed to keep pace with these needs,” he stressed.

Second, the international community must lay the foundations for long-term international support, since even if “by some miracle” the conflict ends tomorrow, the enormous humanitarian and development needs will continue for years and even decades.” The United Nations stands to lead and coordinate this effort,” he declared.

“Syrian and other refugees need the chance to work and provide for their families. Today, let us commit to getting all Syrian children into school, within months, not years. Offering hope is the best way to slow the exodus of educated Syrians and prevent the radicalization of a lost generation.”

Third, ways must be found to protect civilians. “All sides in this conflict are committing human rights abuses of a shocking scale and depravity. Palestinian refugees, already vulnerable, are doubly dispossessed and in a desperate position. We must end sieges and bring food to starving people,” Mr. Ban said.

UN Under-Secretary-General for Humanitarian Affairs and Emergency Relief Coordinator Stephen O'Brien noted that while donors generously contributed $1.25 billion to last year's Syria humanitarian appeal, that was just 43 per cent of the needs.

“We can do better,” he stressed, referring to this year's appeal for nearly $3.2 billion for the 2016 Syria Humanitarian Response Plan inside Syria and $4.5 billion for the Regional Refugee and Resilience Plan for response, resilience and stabilization in neighbouring countries.

“Let us show the people of Syria we are their partners. We have not forgotten them, and let us give them hope for the future by taking the unprecedented step of meeting 100 per cent of this year's appeal.”

Amidst all the carnage the warring parties display a complete disregard for international humanitarian and human rights law, Mr. O'Brien said, calling on “all influential governments here in this room” to do more to persuade the sides to fulfil their basic legal obligations.

“This vicious cycle of death and destruction risks being seen as the new normal in Syria. But death, suffering, wanton destruction and disregard for the law should never be seen as 'normal'. Every time we think we have reached the nadir of human suffering in this crisis, it continues to sink deeper and deeper before our eyes.

“The recent pictures of emaciated, starving children in the besieged town of Madaya shocked the collective conscience of the world,” he added, paying tribute to the thousands of mostly Syrian staff and volunteers of the UN, the Syrian Arab Red Crescent, non-governmental organizations and hospital staff who carry out their duties in the face of political pressure, violence and intimidation.

They are true humanitarian heroes. I especially pay tribute to the 82 colleagues who have lost their lives in the line of duty,” he said.

UN Development Programme (UNDP) Helen Clark stressed that alongside the enormous humanitarian relief effort there must be increased investment in building the resilience of people and communities within Syria, and within the neighbouring countries hosting refugees.

“The need for investment in both relief and resilience is well reflected in this year's UN appeals,” she said. “There is now also strong and welcome recognition of the need for more support for the neighbouring countries who have accommodated over four million Syrians.”

Among the UN officials participating in events on the side-lines of the Conference, Under-Secretary-General Zainab Hawa Bangura the Special Representative of the Secretary-General for Sexual Violence in Conflict the spoke at side event on “Inside Syria.”Commending Member States, including neighbouring Jordan, Turkey and Lebanon, as well as many in Europe and beyond, for the support they are providing to Syrian refugees, she appealed to participants to ensure that in the course of the asylum process, survivors of sexual violence get prioritised and provided with adequate services including medical and psychosocial support.

In addition, she called for ensuring that these victims and survivors are kept together with their families to alleviate their trauma and ensure their quick integration; to ensure that unaccompanied children seeking refuge are well documented and protected, so that they do not fall prey to sex traffickers and other criminal gangs; and, while granting safe haven to refugees, asylum States also should provide avenues for justice, to hold the perpetrators of crimes such as sexual violence accountable.

In an opinion piece issued ahead of the opening of the Conference, the UN Special Envoy for Global Education, Gordon Brown, said that “perhaps the answer we need – and the bold plan we want – can be found 70 years in the past.,” and called for a massive scale-up of resources and actions similar to post-War 'Marshall Plan' to address the chaos of 12 million Syrians displaced from their homes.

“We know the face of failure. From South Sudan and the Democratic Republic of the Congo to the Afghan-Pakistani border, pinprick policy solutions have led to ever-lengthening conflicts and aborted attempts at reconstruction,” he observed, but added that in enacting the post-war Marshall Plan, and more recently in fighting the global recession, delivering African debt relief and addressing climate change, the world has shown itself capable of uniting in great, transformative acts of statesmanship.

Just two days after declaring the official start of delayed intra-Syrian talks in Geneva to end five years of bloody warfare, the United Nations mediator suspended them for three weeks today following differences between Government and opposition delegations on the priority of humanitarian issues.