UNICEF/Tomislav Georgiev
Near the town of Gevgelija, former Yugoslav Republic of Macedonia, a young Syrian girl holds the hand of an adult waiting to board a train to the Serbian border.
3 February 2016

"We now need a mobilization to live up to the humanitarian imperative and to help the millions of men, women and children in desperate need around the world," he told a briefing on the report of the High-Level Panel on Humanitarian Financing, which is entitled Too Important to Fail – Addressing the Humanitarian Financing Gap.

Since the report was commissioned, "the conditions on the ground have become even more dire," said Mr. Eliasson, adding that this has in turn made the convening in May of the first-ever World Humanitarian Summit that much more important.

In Central America, Africa, Asia and the Pacific, millions of people are food insecure, often caused by drought, sometimes related to the effects of El Niño. Millions more are at risk of more extreme weather events, he said.

"Apart from these natural disasters, the world is trying to with a number of atrocious man-made catastrophes. The suffering is enormous and international humanitarian law is being disregarded to a shocking degree," Mr. Eliasson.

Indeed, the conflict in Syria has generated the worst contemporary humanitarian crisis, Mr. Eliasson continued, noting that in recent weeks, the world had been shocked by the images of the suffering endured during the siege of Madaya. “Tragically, there are hundreds of Madayas throughout the country. Humanitarian conditions in besieged and hard-to-reach areas are insufferable and with time without relief, getting even worse," he said.

"The resulting tensions in neighbouring countries are enormous," he continued. "Refugee flows are spectacular and shocking. The social and political consequences may become uncontrollable," he said, and these events and conditions are an affront to our common humanity and the fundamental principles of international humanitarian law."

In this context, he stressed the importance of international humanitarian conference on Syria to be co-chaired tomorrow in London, by the Secretary-General, Ban Ki-moon, the United Kingdom, Germany, Kuwait and Norway.

"We have seen the power of global solidarity with the recent adoption of the Sustainable Development Goals. We must fulfill our promise to leave no one behind, acting boldly in for the 125 million people who now depend on the international community for their survival, "he said.

Mr. Eliasson went on to say that the World Humanitarian Summit will be the international community's opportunity to unite in the name of common humanity – and to take a stand against the horrific levels of suffering and misery that we witness in the world today.

“We must now stand in solidarity with the most vulnerable people of the world – and we must be committed to represent their interests at the Summit in Istanbul in May,” he said.

♦ Receive daily updates directly in your inbox - Subscribe here to a topic.
♦ Download the UN News app for your iOS or Android devices.
Summit 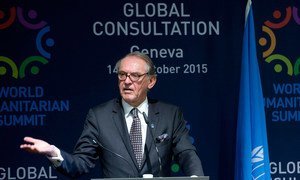