Almost two months after its launch, a humanitarian appeal to aid 1.3 million vulnerable people in conflict-torn Libya is 99 per cent unfunded, a senior United Nations official for the North African country warned today, calling on the international community to step up to the plate.

“With winter temperatures plunging and funding support for the Libya Humanitarian Response Plan (HRP) stagnant, I am increasingly concerned that vulnerable, conflict-affected people in Libya will continue to suffer due to a lack of meaningful and timely support,” UN Humanitarian Coordinator for Libya Ali Al-Za’tari said in press statement issued from neighbouring Tunis.

“The gallant efforts of Libyan organizations, public or civic, whether on their own or with external aid, are not enough to meet the demands of the many affected by the conflict,” he said.

The HRP was officially launched in Tunis on 9 December and appealed for some $166 million to assist a targeted population of 1.3 million people out of 2.4 million affected persons.

“Crudely put, the provision of life-saving assistance to affected persons by years of a debilitating and destabilizing conflict equated to $127 per person over a 15-month period (October 2015-December 2016),” Mr. Al-Za’atari said.

“Now, more than six weeks after its launch, we find that this urgent appeal has received only 2.1 million, a paltry 1 per cent of the overall amount required. Just two donors have contributed funding,” he said.

He noted that the international community is mobilizing itself around the nascent Government of National Accord (GNA) to fund multimillion projects to support it, a major element plank in a UN-brokered agreement in December to end four years of factional fighting that has killed many Libyans and left nearly 2.4 million in desperate need of humanitarian aid.

“This should be applauded and encouraged. Vital humanitarian funding, however, is conspicuous by its absence,” he said. “I am appealing today to the international community, on behalf of the most vulnerable in Libya, for a hand up and not a hand out. The humanitarian situation needs to be addressed now,” he added. 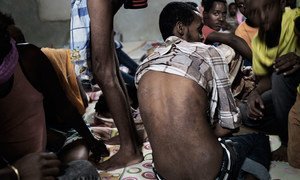 With a political deal among Libya’s numerous factions in flux, some $50 million is urgently needed to meet the life-saving needs of nearly 2 million people in crisis-torn country, as the conflict lingers and the yearlong peace process has again hit stumbling blocks, the World Health Organization (WHO) has warned.