29 January 2016
Two senior United Nations officials today disclosed the names of some of the countries whose troops are accused of sexually exploiting and abusing minors in the Central African Republic (CAR), including both non-UN and UN forces tasked with maintaining peace and security in the conflict-torn nation.

“I think it's hard to imagine the outrage that the people working for the United Nations and for the causes of peace and security feel when these kinds of allegations come to light. Particularly involving minors, it's so hard to understand” said Anthony Banbury, the UN Assistant Secretary-General for Field Support, in an emotional address to reporters in New York.

Fighting back tears, Mr. Banbury said the UN is doing everything it possibly can to assist victims, to bring accountability and justice for them, and to prevent these cases from recurring.

He announced that a new website will soon feature a report by UN Secretary-General Ban Ki-moon on special measures to combat sexual exploitation and abuse, expected to be released next month. For the first time, it will identify the countries involved in the cases and provide granular information about individual allegations, the status of investigations, as well as on any disciplinary action taken.

Highlighting that transparency is an important part to combatting this “incredibly difficult scourge,” the UN peacekeeping official today named some of the countries involved—all of which are UN-forces: Bangladesh, the Democratic Republic of the Congo (DRC), Morocco, Niger, and Senegal.

He noted that all victims in these cases were minors at the time of the alleged abuses, perpetrated by a total of 10 people from these 5 countries. He also indicated that the UN has launched its own investigation in the cases involving the DRC and Niger, as the countries did not respond to the UN's request to take the lead on the matter.

Meanwhile, the UN High Commissioner for Human Rights today said he is extremely alarmed at continuing allegations by members of foreign military forces.

The alleged crimes mostly took place in 2014, but only came to light in recent weeks. A joint UN team in CAR recently interviewed a number of girls who said they had been sexually exploited or abused by foreign soldiers.

“These are extremely serious accusations and it is crucial that these cases are thoroughly and urgently investigated,” High Commissioner Zeid Ra'ad Al Hussein said in a

While the nationalities of some of the soldiers remain unclear, three of the girls said they believed their abusers were members of the Georgian EUFOR contingent. The four girls were aged between 14 and 16 at the time of the alleged abuse.

UN human rights staff also interviewed a girl and a boy, aged seven and nine respectively when they were allegedly abused in 2014 by French Sangaris troops. The girl said she had performed oral sex on French soldiers in exchange for a bottle of water and a sachet of cookies. Both she and the nine-year-old boy said that other children were abused in a similar fashion in repeated incidents involving several French soldiers.

All six cases involving non-UN foreign military forces took place in, or near, the M'Poko camp for displaced people next to the airport in the capital, Bangui.

High Commissioner Zeid last week raised the cases with the European, Georgian and French authorities, as well as with another country on a similar allegation for which additional corroboration is needed. All four authorities have promptly responded to the High Commissioner and stated that they have already begun investigations or referred the cases to relevant judicial authorities in their respective countries.

“I am heartened at the initial responses we have received from the countries concerned, as well as from the European Union, which show they take these terrible allegations very seriously,” said the High Commissioner, noting that his Office will continue to closely follow up on these cases and any others which emerge as the UN team on the ground continues its investigations.

“Far too many of these crimes continue to go unpunished, with the perpetrators enjoying full impunity. This simply encourages further violations. States have an obligation to investigate, prosecute and ensure that the victims receive the redress to which they are entitled. As more and more cases emerge, implicating more and more national contingents, it is also clear that all foreign military forces, whether UN or non-UN, must employ much stronger and more effective actions to prevent further abuse and exploitation – and not just in CAR,” he stated. 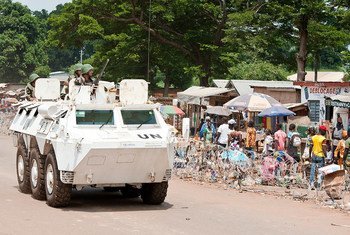 5 January 2016
The United Nations is investigating new allegations of sexual exploitation and abuse and other misconduct by peacekeepers in the Central African Republic (CAR), this time by forces under the world body’s flag, the top UN official there said today, as further steps are being put in place to combat the scourge.