The United Nations mourns the loss of Jean Gazarian, a staff member whose six-decade career offered him a rare opportunity to witness the various moments and milestones along the path that saw a nascent 51-member Organization develop into the 193-strong world body it is today.

“I’ve seen the evolution of this great Organization of ours,” Mr. Gazarian said in a 2009 interview with the UN Institute for Training and Research (UNITAR), “it has survived all obstacles throughout its career.”

From 1946, when the French national joined the UN Secretariat as a translator, to his tenure as Director of the Division of General Assembly Affairs, Mr. Gazarian devoted his life to international public service. Even after retirement in the late 1980s, he served a nearly 20-year stint teaching diplomats and staff as a full-time Senior Fellow at UNITAR.

“He was absolutely unique as a person,” Ahmad Kamal, Ambassador and Senior Fellow at UNITAR, told the UN News Centre. “His knowledge, his devotion to the UN and the manner in which he inspired love and affection among thousands of UN diplomats and staff members made him a prince among men.”

In 2013, during the commemoration of the 50th anniversary of UNITAR, Secretary-General Ban Ki-moon paid tribute to Mr. Gazarian – tipping his hat to the wealth of accumulated knowledge accrued by the veteran staff member.

Interview with Jean Gazarian "The Youngest Member of the United Nations" on training diplomats at the UN and the role of diplomacy in the multilateral context. Credit: UNITAR

“You had a unique perch, working with the General Assembly for many years. You have truly seen it all… And, I am sure, enough behind-the-scenes intrigue to fill a movie or a memoir. But of course, as a consummate international civil servant, you will never betray your oath of confidentiality!” said Mr. Ban.

“You served several Secretaries-General. Most of all, you earned the respect of colleagues around the world.”

Mr. Gazarian was never stingy with his vast pool of knowledge, always ready to share his insight and experience of historic moments. 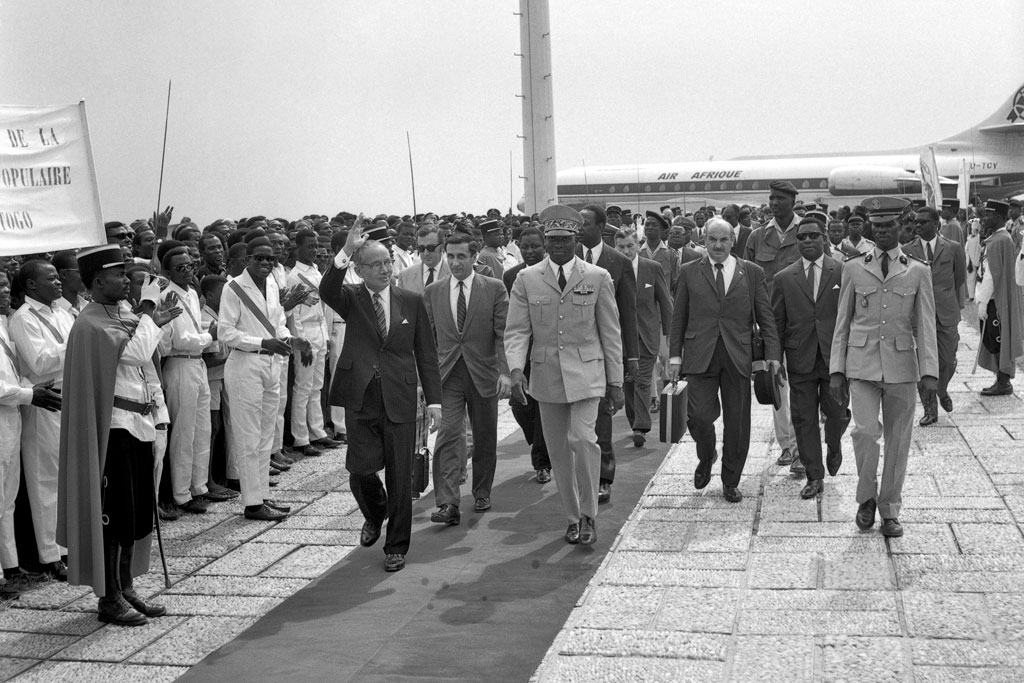 Secretary-General U Thant greets the gathering that welcomed him upon his arrival in Togo in January 1970. At right is the President of Togo, Etienne Eyadama. At centre is Jean Gazarian, Senior Officer, Executive Office of the Secretary-General. UN Photo

“There was a feeling of euphoria. All of the delegates coming back from San Francisco were extremely pleased with what they had done,” he had stated, recalling the UN Conference on International Organization that took place in the US city and which drew up the UN Charter.

Drawing from his vast experience over the decades, he was also able to offer a personal perspective on a number of issues as well as Secretaries-General, as he did in a 2007 article for the UN Chronicle. 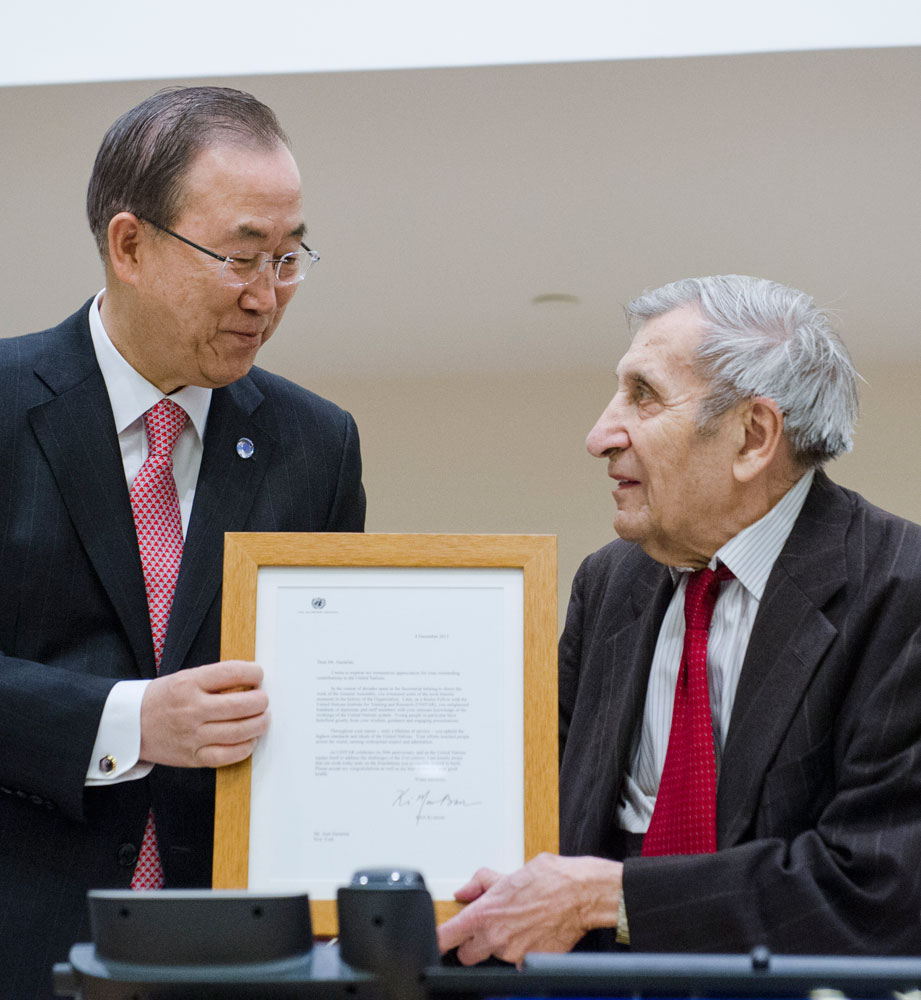 “In the early days of the United Nations, an atmosphere of extreme enthusiasm prevailed. Delegates were convinced they had adopted a system of collective security that would ban all wars forever, a feeling shared by Trygve Lie of Norway, who served as the first Secretary-General,” recounted Mr. Gazarian.

By 1953, when Dag Hammarskjöld of Sweden took over the post, Mr. Gazarian indicated that “the international situation had begun to deteriorate and the earlier euphoria was replaced by an atmosphere of extreme tension between the East and the West.”

He described former Secretary-General U Thant as “a humble man, but with very firm convictions… He often used quiet diplomacy to calm lethal tensions during the difficult period of the cold war.”

“The appointment of Javier Pérez de Cuéllar… came as a complete surprise to him as he was just beginning to enjoy retirement,” Mr. Gazarian said, adding that during his ten-year mandate “a number of sources of tension associated with the cold war were gradually eliminated.”

He went on to say that Kofi Annan “already had 35 years of UN experience” before ascending to the top job and observed that Ban Ki-moon “created a precedent by placing his left hand on the UN Charter ” when he took the oath of office on 14 December 2006.

Diplomats were not Mr. Gazarian’s only pupils. He had also shared his lessons with UN support staff preparing for promotion examinations. In the 1990s he was a regular figure at workshops where he would present to aspiring professionals first-hand accounts of UN events, such as when Soviet Premier Nikita Khrushchev pounded his shoe on his desk during a meeting in October 1960 to protest remarks by a Philippine diplomat about Soviet aggression.

Mr. Gazarian was “a walking encyclopaedia of the UN,” according to Maritina Paniagua, a retired UN librarian who worked closely with him, who hailed his amazing institutional knowledge about the Organization. 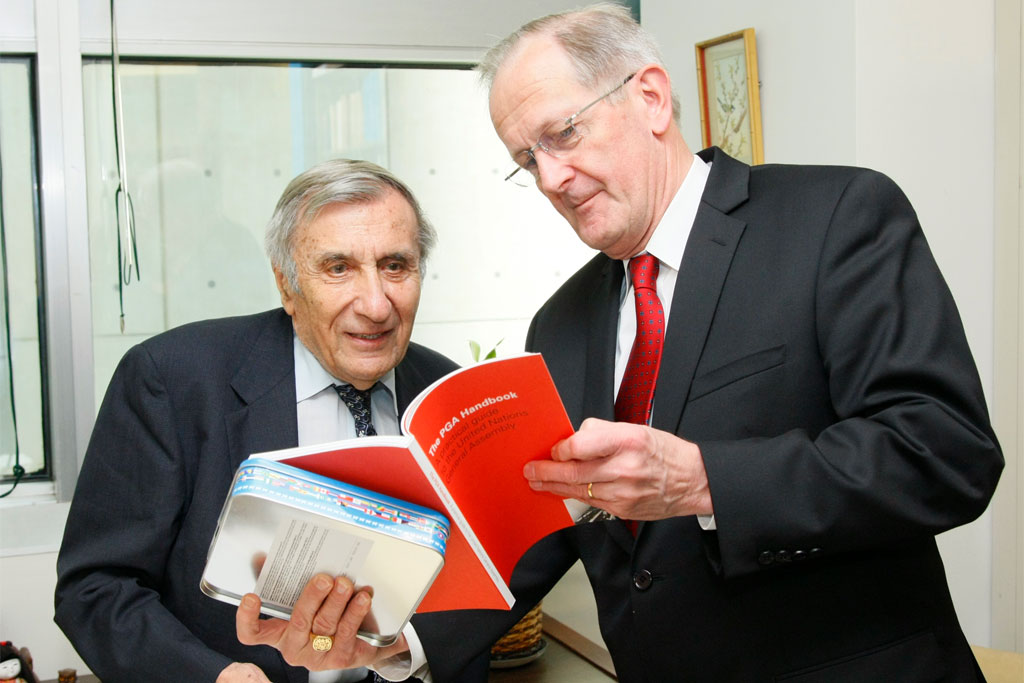 Joseph Deiss (right), President of the sixty-fifth session of the General Assembly, exchanges views with Jean Gazarian, who worked with UNITAR since 1987, teaching diplomats and staff. UN Photo/JC McIlwaine

“He was a true teacher,” she added. “When he taught the UNITAR courses to delegates, it was not only the subject matter, but also what to do and what not to do as a delegate. For him, good, solid diplomacy was important. One of his best teaching tools to achieve this goal was through his stories of his experiences at the GA.

“It is a great loss for us at DHL [Dag Hammarskjöld Library], for the UN and for the new generations of delegates.”

The veteran UN staffer passed away on 18 January in New York.

♦ Receive daily updates directly in your inbox - Subscribe here to a topic.
♦ Download the UN News app for your iOS or Android devices.
united nations|commemorat

FEATURE: From misplaced emblem in London to iconic hall – the UN General Assembly across 70 years

Before there was a United Nations Secretary-General, a Security Council or an iconic Headquarters in New York, there was the General Assembly, the most representative body ever of world nations, meeting for the first time in a London hall facing Westminster Abbey, the 1,000-year-old coronation site of Britain’s kings and queens.